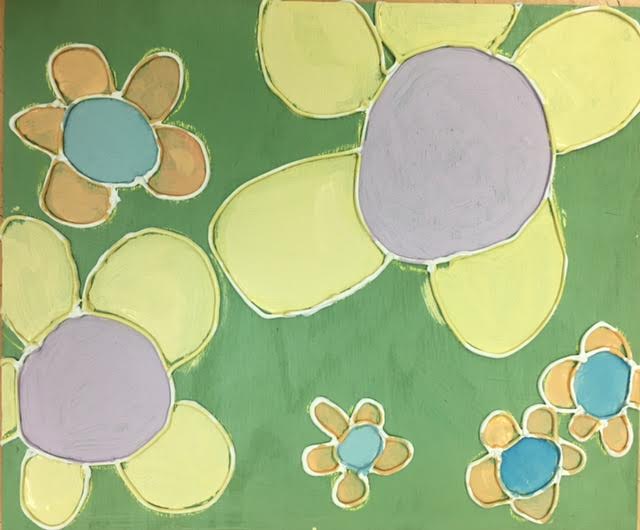 Sure, you've used caulk to seal around your bathtub and baseboards, but have you ever thought to use it as a drawing medium. 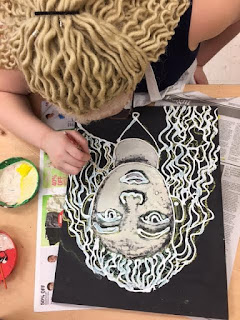 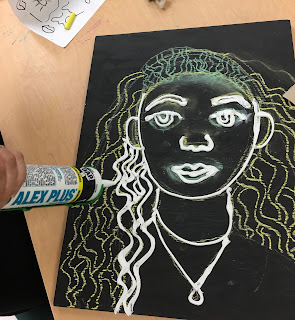 Last week, I brought enough plywood from home, for each of my students to create  an image. They sanded and painted the boards a solid color before drawing their image in chalk. This was then traced in caulk. 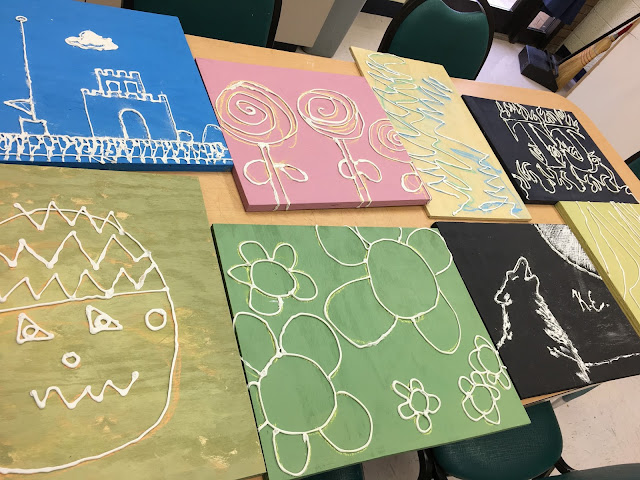 Two tubes of caulk made all 9 images on this table.

After the caulk dries (it takes maybe 3 hours, so we waited until the next day), the paintings are ready for more layers of color. Most everyone kept their background color the same as their underpainting, but one student, kept her original pink board color for the flowers and added a layer of  yellow latex for the background. I love how the brush strokes create visual texture to compliment with the caulk texture. 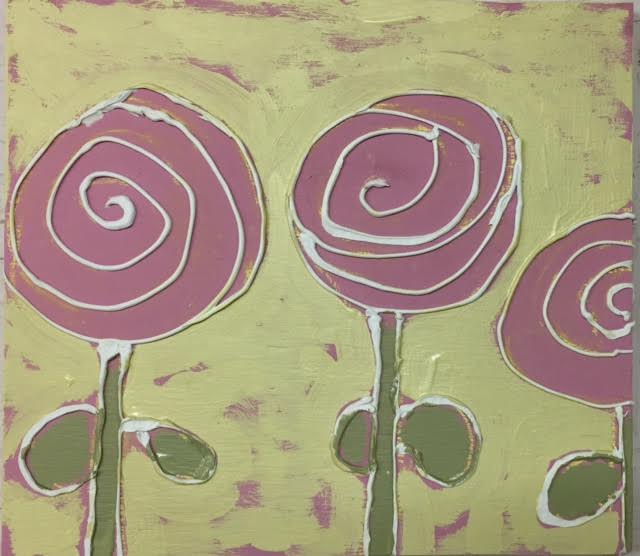 Tactile images are great for visually impaired art consumers, but they are also great for visually impaired artists. These students were able to stay in the lines better when there was a little caulk wall to create a barrier for the paint brush. One student was so pleased with her work that she has come into my room the last three mornings, offering the phrase, "Wanna feel my painting?"

Posted by Kristen Applebee at 4:01 PM No comments:

Josef Albers was one of the talented German artists who taught at the The Bauhaus School until the Nazis put pressure on the school to shut down in 1933. Hitler hated modern art.  Albers immigrated to The U.S. and went on to teach at the then new Black Mountain Art School. He is most famous for his "Homage to the Square" series, which consisted of hundreds of paintings, each of several squares nestled inside one another.  He was very interested in color relationships. A green may look blue-green next to a yellow, but yellow-green next to a blue.  A warm color will look like it's coming towards you, but a cool color looks like it's receding in space. This week, my elementary students studied Josef Albers.

Color relationships are an interesting thing to try to teach students who are color blind, or completely blind. We've been reading the picture book about Esref Amarmagan, the blind artist from Turkey, who had to keep his colored pencils laid out int he same order, and memorized the color of objects, so he could recreate them in paint in a way that made sense to future viewers. 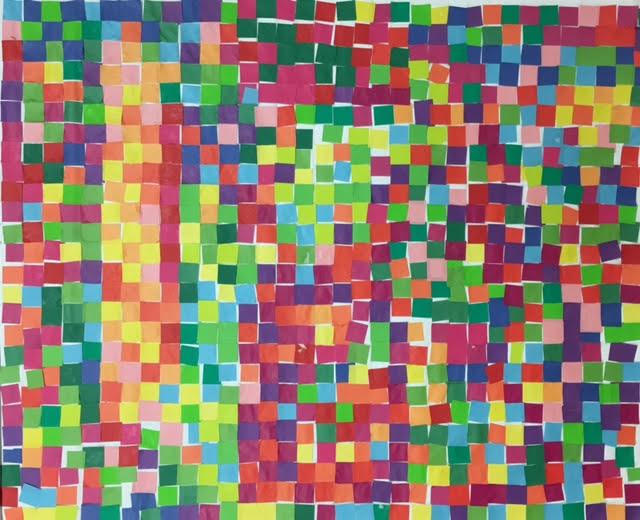 When I asked one class,"What color is a watermelon?" A couple girls, with some vision, answered, "Green!" But when I followed up by asking about the color of the inside of a watermelon, a boy, with no vision, eagerly said, "Green!" The only way for kids like him to know the colors of things is to be told. 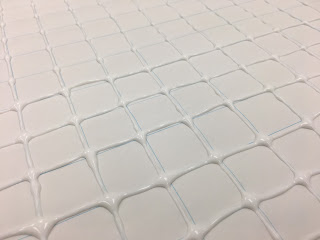 So we talked about the color of things, and then we worked collaboratively to make a giant collage of hundreds of 1 inch squares of color.  First, I used Elmer's glue to trace the giant chart paper grid. After it dried, students felt the squares and were able to independently glue and  place their pre-cut 1" squares or origami paper. 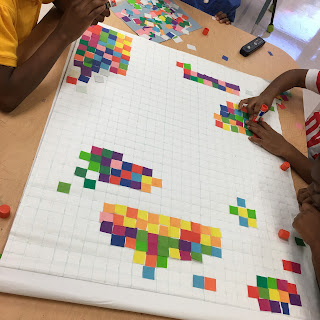 To avoid gluing the color side down or having to tell each student the color of each square they picked up, I gave them a tool to tell them the color of things, It's the APH Color Test, and you just press it against something and push the button and it will tell you what it is (as shown in the video below). Everyone got a kick out of testing their skin color. Apparently mine is "murky gray beige" or "gray pink" so that information will come in handy next time I buy make up. 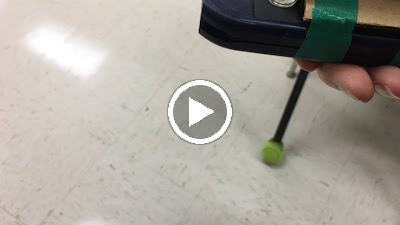 Each child also made his/her own, "Homage to 'Homage to the Square'" piece gluing various colored squares together and trying to explain why they thought their combination was working. 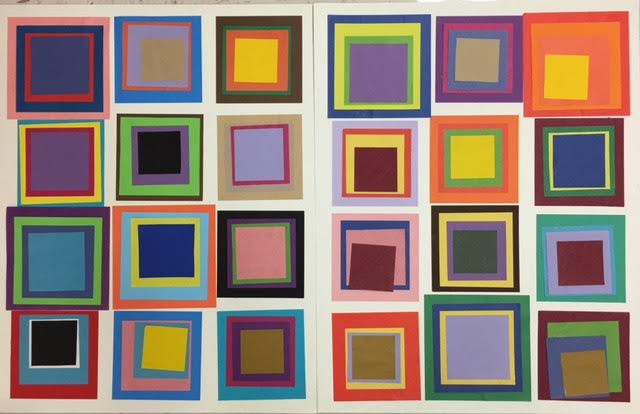 Extra time meant gridding another giant piece of graph paper with glue and having students use dot makers to make color clusters and patterns. What a corful way to start the school year! 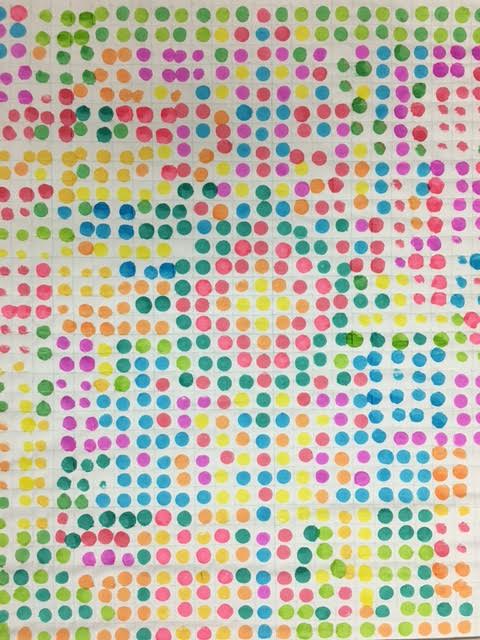 Posted by Kristen Applebee at 6:31 PM No comments: 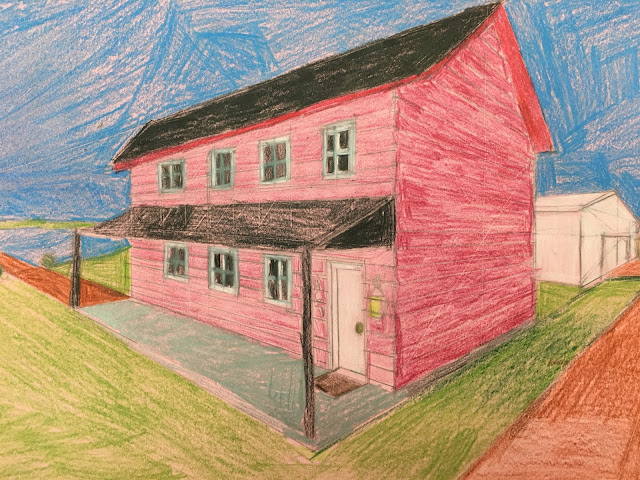 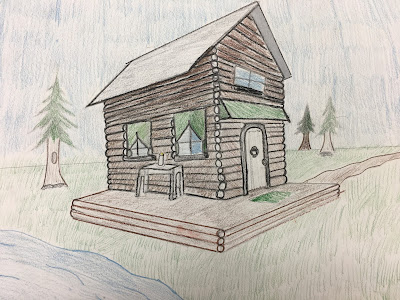 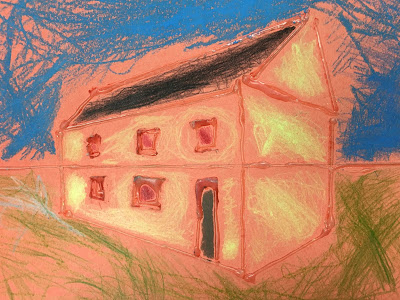 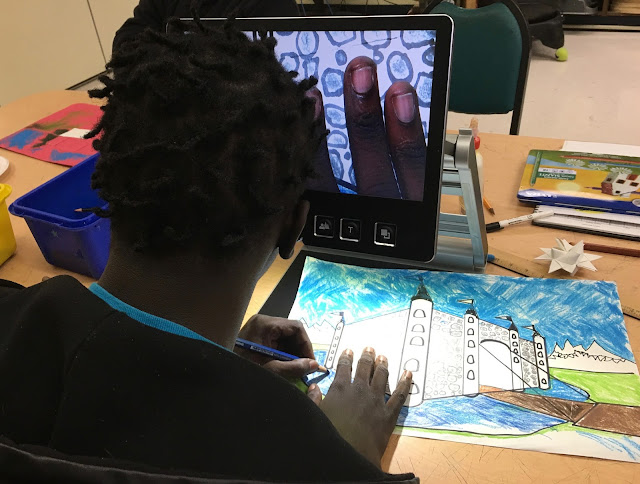 Posted by Kristen Applebee at 9:01 AM No comments: