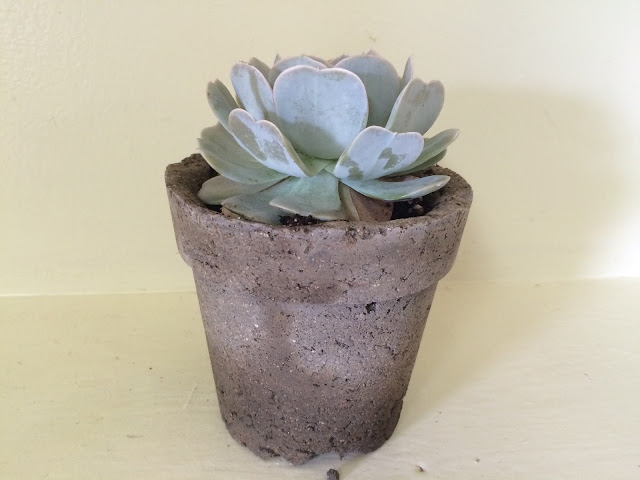 When my horticulture teacher coworker, Keith Blackwell, suggested I teach how to make hypertufa for summer camp, I asked, "hyper what?" Turns out this is the stuff that those stone looking bird baths and Japanese lanterns are made from. I've seen some really beautiful gardens of hypertufa pots and planters and since our camp theme this year was "Down on the Farm" I thought planting and harvesting appropriate craft projects were perfect for art class.

There are many recipes online and all of them give ratios. I used:
one part Portland Cement
one part Peate Moss
one part sand
one part Vermiculite (not really, it was more like 1/4 or 1/2 of the other stuff) 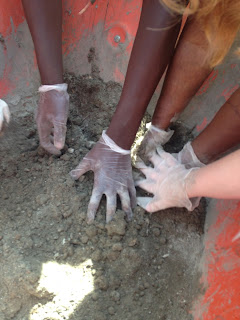 So when I ordered the ingredients I got the same number of pounds, which was a huge mistake because 100 pounds of the cement was not nearly as many cups or (bowls or whatever you are using to scoop to be considered one part) of Peate Moss, so I ended up with tons and tons of that left over. In fact, for 30 campers, I used about 97 pounds of cement and about the same of sand, but only maybe 1/3 of a 50 pound bag of Peate Moss. Students scooped and counted while wearing their latex gloves and dust masks. You don't want to get the powdered cement in your lungs because the moister is what turns it to mortar and that's not good to have in your body. We used a wheel barrow and worked in groups of 9 students at a time, pouring water and mixing with their hands. You want it to be able to hold together, but not be runny. 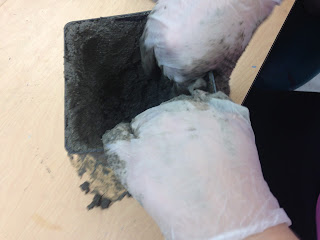 Then we pressed the mixture into the insides of old plastic planters, 6in round or square ones worked well. You can use old yogurt container,s milk cartons, or whatever inspires you to form a mold. I tried using mosaic tiles in the tops of one pot, but need some more practice, as some fell out when it dried.

Two days later we popped the hardened containers out of the plastic containers and let them finish drying for another day. I think ideally, a week or two would be needed so that it can cure, but a day or two is perfect if you want to carve a design or sand the outside to smooth it out. 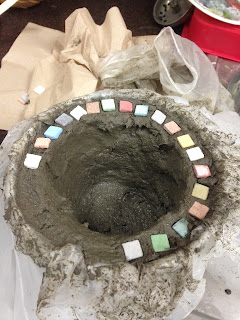 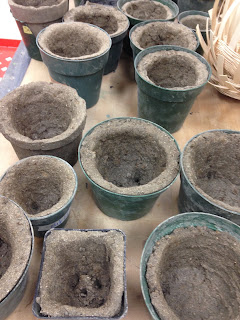 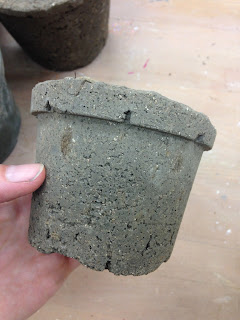 Be sure to find a plant that works with your new pot. We poked a small hole in ours, but I'm not sure that's necessary since the Peate Moss should help absorb some extra moisture if the container is large enough. It's a learning process, but so far, so fun! 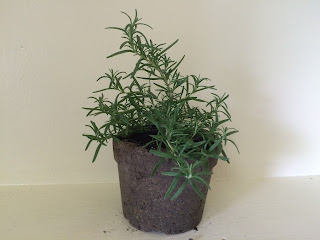 photo credit for plant pics to Keith Blackwell
Posted by Kristen Applebee at 9:59 AM 1 comment:

Basket Weaving at Camp for the Blind 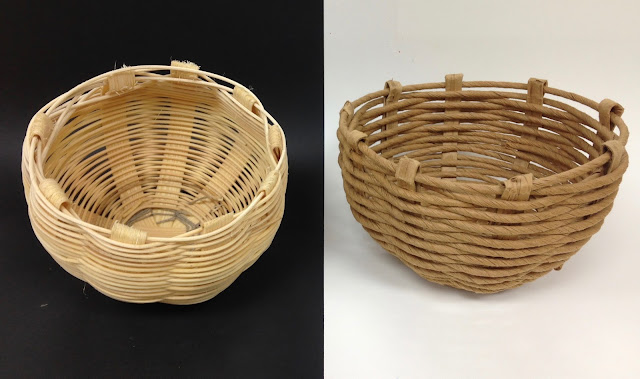 The week after post-planning for teachers, I taught Art, including basketry, at a special camp for middle and high school students who are blind or visually impaired. Basket kits for weaving baskets are expensive, and frankly, end up looking like kits, so I decided we'd just buy the reed and start from scratch.

Weaving works because the under, over, pattern alternates based on an odd number of reeds from which to weave. I started by cutting 4 flat reeds of the same length and one half the length. I used twine to start the weaving pattern with the half length joining in as the 9th spoke. 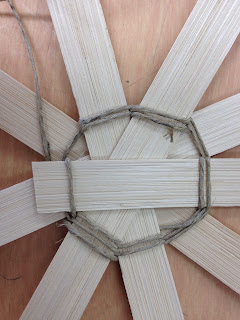 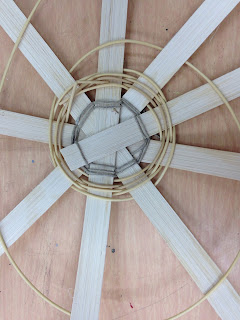 After enough twine is used to fill in the tiny gaps, and add some stability to the frame, round reed can be used to weave. The smaller the size of the reed, the smaller the number. So if you buy round reed 1 or 2 or 3, it will be very easy to soak in water and bend around corners. I think we used size 2. Pull it tight each round and push it against the previous circle for a stronger basket. After finishing one reed, simply add another, and tuck the ends in as you go.

Because the reeds come rolled up, there will be some curve, which helps with the shape of the basket. Students pulled tighter for a taller, thinner, shape, or flatten it for a wider shape. Once the body is the right size, students soaked their baskets, bent the flat reads inward, and tucked them into the round, woven reeds. We held them in place with clothes pins until drying. 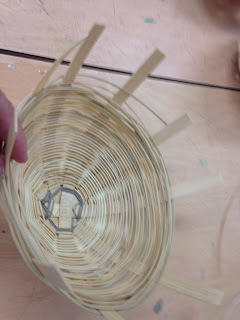 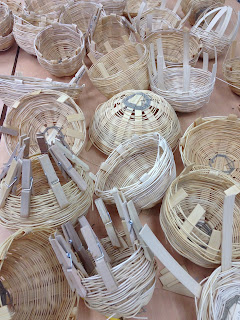 I was so surprised at which students were able to pick up the weaving process quickly. With enough practice, this could be a viable career path (craft shows or online store) for students with no vision. There was a lot of enthusiasm among kids as they went from telling me, "The struggle is real," to "I got this!" On the end of camp survey, basket weaving was listed more than any other activity as something new that was learned at camp. It was well worth the $3 of materials for students to have the experience and take home something to be proud of. 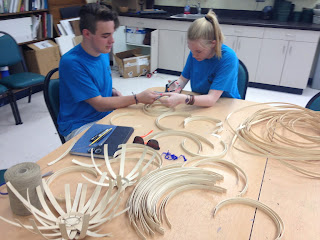 I had a couple good volunteers, doing the prep work of cutting the flat reeds. My son, Jonah is on the left.

Posted by Kristen Applebee at 10:09 AM No comments:

I wanted something special for each of my students who was graduating, so I made several memory pots. First I went through digital pictures of field trips, projects, and happy classroom moments. 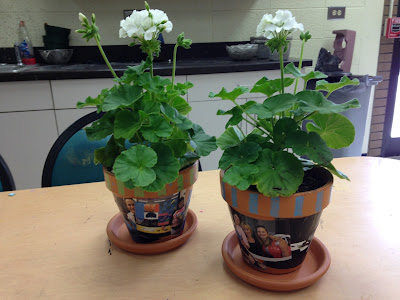 I printed them from the computer, cut each one out, and decoupaged it to a terra-cotta pot. This is a very simple process of painting the pot quickly with Mod Podge, sticking the pictures in place and then painting Mod Podge on top. It will look white at first, but dries clear. It seemed to work better if the pictures were small and positioned at an angle, although, I'm sure larger images would be fine as long as they were tapered at the bottom to avoid wrinkling. I used 6" pots and it took 5 or 6 pictures that were about 3-4" wide.

I used paint pens to decorating the rim, and then the horticulture teacher planted a flower in each pot so the gifts could be from both of us. I ended up spending about $3.00 per student. I hope it will bring back memories of things learned and shared during our last several years together. Next time you can't think of what to give for Mother's Day, Father's Day, Secretary Appreciation Day, or birthdays etc, give this a try and wait for the smiles.

Posted by Kristen Applebee at 9:39 AM No comments: