While most Pop artists from the 1960's were making two dimensional work, Claus Oldenburg was making the most of the 3D world, creating every day objects in their every day glory. He made plaster cheeseburgers and dessert displays the same year that Andy Warhol introduced us to Campbell's soup as art form, and he called his gallery, a store. Oldenburg made a giant fabric floor cake that makes you want flop on, for your sugar-induced nap. He made huge French fries that hung form the ceiling, spilling out of it's container, and a droopy vinyl toilet (which was the first Oldenburg I'd encountered as a teenager on a trip to the MOMA). His 45 foot clothes pin outside Philly's city hall, and his cherry on a spoon, in Minneapolis, speak to time, place, and the monumental importance of every day objects. 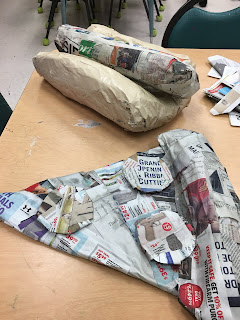 Because my students were already familiar with Warhol, Lichtenstein, and Segal, we could jump right in to figure out how Oldenburg fit into Pop culture.

Then students picked an everyday item that had enough meaning to want to "blow up" into a large paper mache sculpture.  And by meaning, keep in mind, that much of Pop art was superficial, and was just about things that we like. That's enough some times. We started with a cardboard shape, and then wadded paper, bubble wrap and paint before wrapping in strips of newspaper dampened by fabric starch.

Students mostly made food: pizza, pretzel, hotdog, pancake, etc. But a couple made objects like an Orbit brailler, or a pair of giant sunglasses. 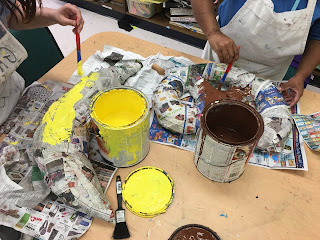 I was surprised at how often someone would walk into my room, see my students working on their projects and ask, "What are these for?" This seriously happened, like 4 or 5 times in one week. At first, I was a little confused and said, "This is an Art class. We make art." But after the 2nd time, I started saying, "For prom." And then people would be like, "Oh. Cool."  So now I think I will incorporate the big hot dog and pizza into our New York themed prom as photo props, just to keep myself honest. 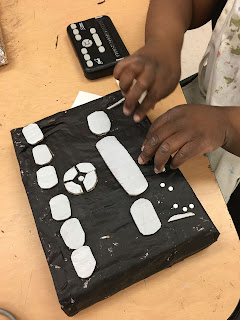 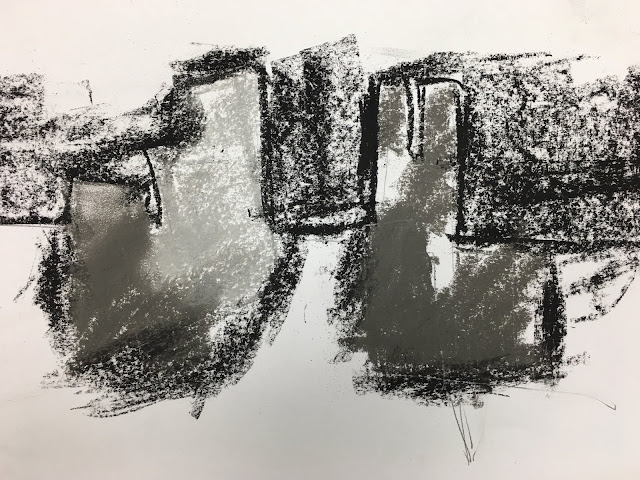 It's been "all prom all the time," in my classroom recently.  My students and I have been trying to finish making big backdrops and table decorations for awhile. Of course, I have still also taught the curriculum with the standards I calendared at the beginning of the year, but rather than using a draped piece of fabric, or paper bags for a still life, I had my students do value drawings from the cardboard objects about to be sky scrapers for our New York themed dance. 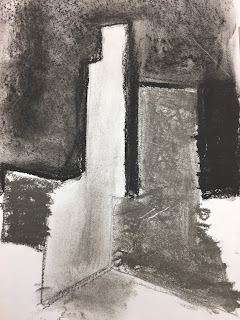 They had to try to remember how two point linear perspective worked, but then the lines of their drawing disappeared as the planes were filled in with value. We stuck to three shades of gray, and in fact, I gave them gray pastel for the lighter areas rather than having them figure out how to lighten it.

Because this project was simplified, it only took an hour to complete.  The following class period, I gave students the freedom to make anything they wanted with charcoal on paper, which, for the most part ended up being a big mushy blob of gray.  This gave me a chance to teach the technique of using an eraser as a drawing tool to lighten.  Below is a result of a cowboy done using that process. 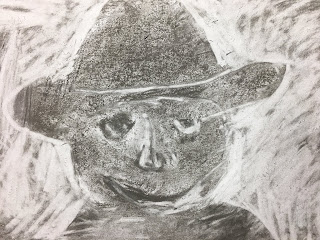 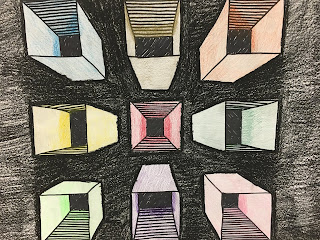 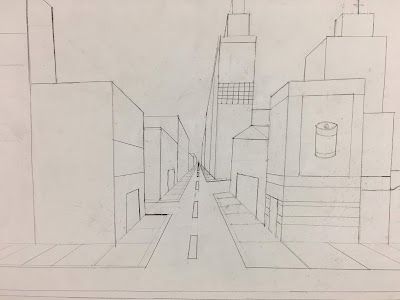 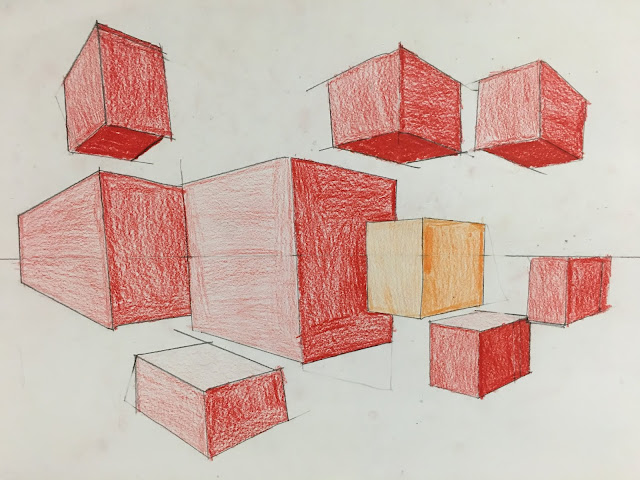 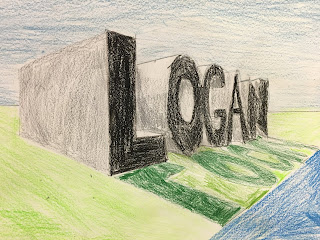 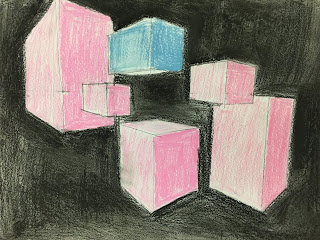 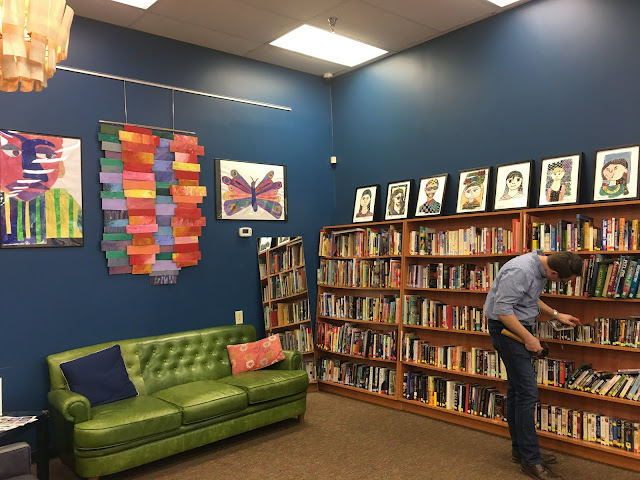 My students are currently showing their work at Goodwill on Forsyth Road in Macon, GA. The opening reception was last night (Feb 28th), and the exhibit will be up until the 4th Wednesday in March. It is a busy store, and four pieces sold within an hour of the show's opening. The students were excited to see their work out in the community. 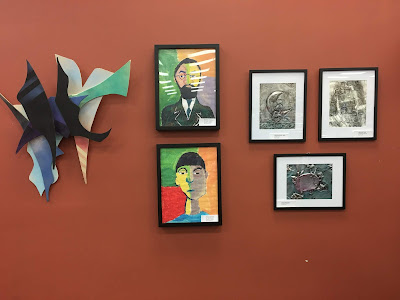 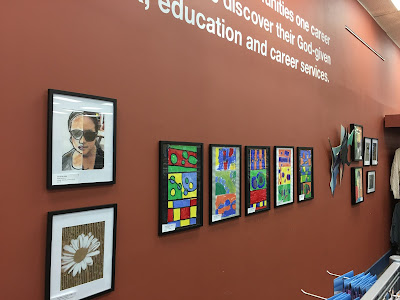 My husband, Dennis helped me hang this show, within a week of taking down his own solo exhibition across the street at Wesleyan College. It feels less sad seeing one show go down, knowing that another one is about to open. And what is even more wonderful is that multiple pieces sold at the openings of both shows. Below are some images from Permutations: Recent Work by Dennis Applebee.

Posted by Kristen Applebee at 4:59 AM No comments: 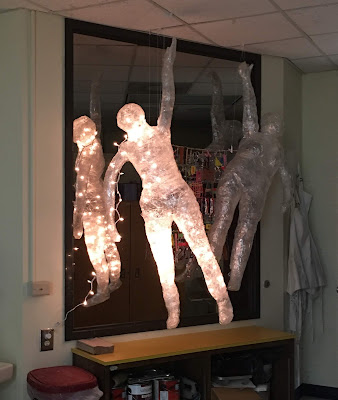 I've been thinking about doing a packaging-tape-figurative-sculpture project for a couple years, but something was stopping me. Was it the fear of failure?  The fear of cutting a student, while trying to get the tape off of them?  Was it the pain of filling out a purchase request for a bunch of packing tape?  Yes, yes, and especially yes.

In the end, I caved, and the students really enjoyed working on it.  We did each figure part by part. First we had a volunteer to be the legs. We wrapped her in packing tape, as though we were bandaging her. A couple layers sticky side out, and then a couple layers sticky side in meant there was no sticky anywhere. I slid my finger around the ankle to make room for scissors and the cut up the side of each leg, releasing the student. 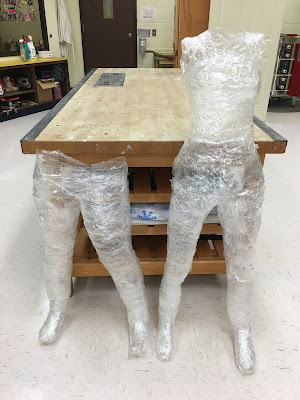 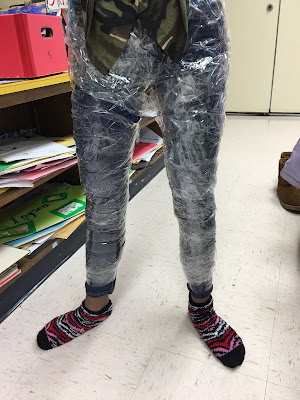 Then we taped the cut seams back up. We had someone else be the torso, and got volunteers for hands and feet.  The only problem  was the head. No one wanted their head taped up even with the nose left open, and I was afraid of cutting someone's hair by accident. So we used a clay head that a student had made a couple years ago. It seemed to be the right size.

I used about 4 rolls of tape for each figure. The first brand I used was Scotch. Next, I used Duck brand which tore too easily. And when I ran out of that I got a couple rolls of Staples brand, which was by far the strongest. I wish I had started with that for stiffer forms. 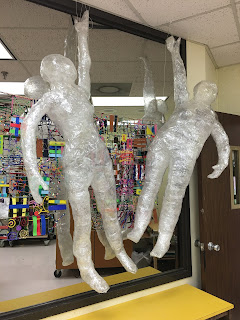 If we were in a normal school, I would stand our sculptures in a lobby or hallway, but with blind students running into them, knocking them down, or stepping on them, I knew they wouldn't last a week. So I kept them in my classroom, over a counter, and hanging from the ceiling by one hand.

Some students dubbed the figures "creepy" while others playfully fantasized with me about the kinds of things  we could use tho fill them and how that would change the interpretation: lights, gum balls, cotton candy. In fact, we did end up cutting an incision or two into one of the sculptures to insert Christmas lights, and it created a completely different mood. There are so many possibilities. 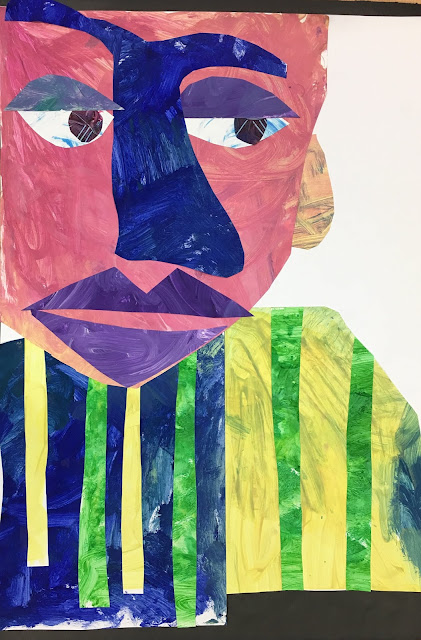 We're not Eric Carle, but we wish we were.  With an upcoming student show, and the need for a few large collaborative pieces, I thought it might be time to resurrect last year's lesson about illustrator, Eric Carle, and his technique of painting paper and then using that to later collage. Only this time the instead of small individual pieces, we would make much larger, group projects. So I discussed color mixing, and students covered large pieces of paper with tempera. Then they painted glue on the back of the shapes I had cut out of the paper, and attached  them onto 2'X3' pieces of paper.

Here are a couple of our finished products. They make me feel happy. 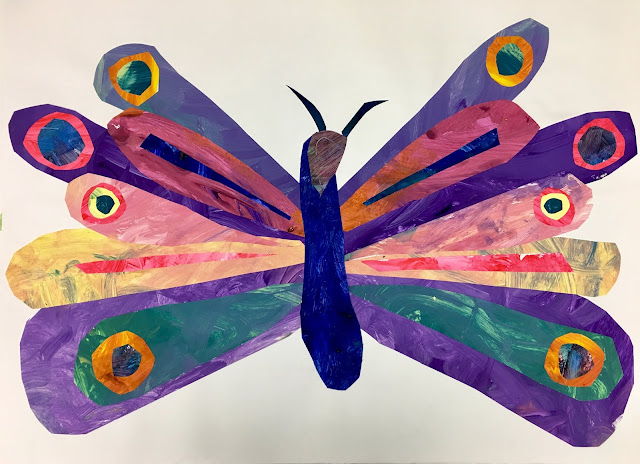 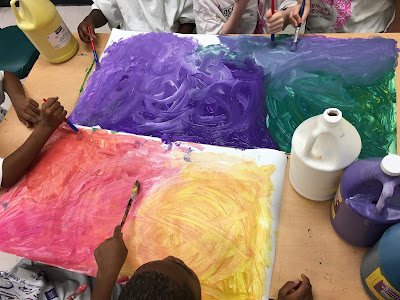