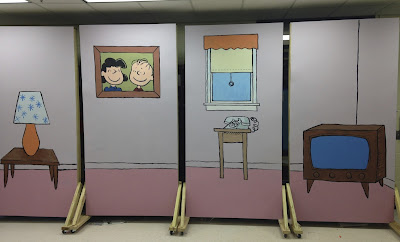 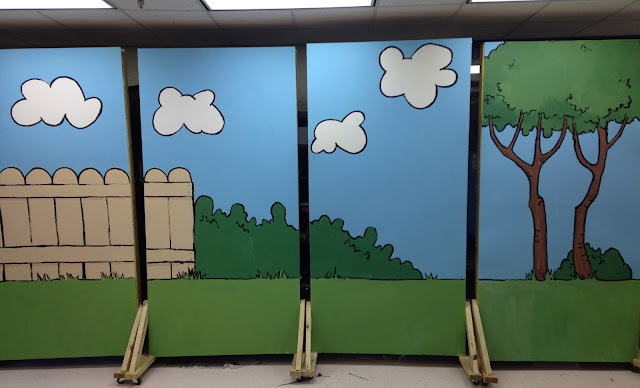 Our school is putting on a production of "You're a Good Man Charlie Brown!" We are excited and it was very important to me to make the sets as true to the style of Charles Schultz, as I could.

Here's what I did. Because we have four 8' X 4' panels, I cut out a piece of paper that was twice as long at it was tall, which in this case was 9" X 18". I folded it in half to make 2 squares and in half again, so that each section was half a square. this kept things proportional for our panels. 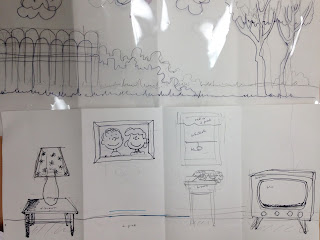 Then I looked up a lot of Peanuts images to get ideas before making a sketch on the paper. I traced the sketch onto plastic, and projected that onto the panels with an old overhead projector. It only takes a few minutes to trace the image (in chalk) before tracing again with black paint. I used this so that my visually impaired students could better see where to paint. My young helpers are legally blind. 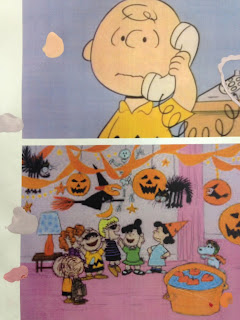 I had a can for each primary color, which I used to mix to get as close as I could to the Charles Schutlz color pallet. And then a couple students and I painted like crazy. It was strange to to see one scene covered up little by little by a new one. 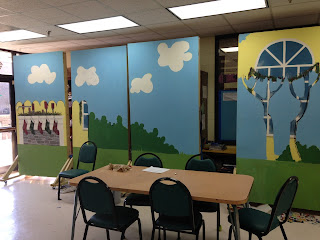 We also painted six 2' cubes with coasters, one for each of the main characters to sit upon, 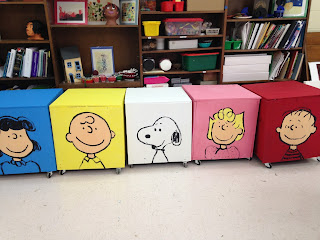 ...as well as Snoopy's doghouse, Lucy's Psych office, a big mailbox, and Schroeder's piano. As a huge Peanuts fan myself, I had a lot of fun working on this show and can't wait to see it performed. 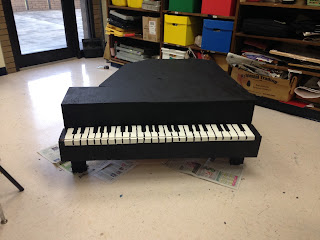 Typography is important. Seems too obvious to state, but I think most of us go through our days reading thousands of words without realizing the influence that the shape of words and the style of letters themselves have. When I have teach the elements of design to college students I have often begun by asking my students if they would send out a wedding invitation using colorful bubble letters? Would they make a birthday party invitation for a five year old using an elegant calligraphy? The fonts, the style, the colors…these all communicate meaning just as the written word. 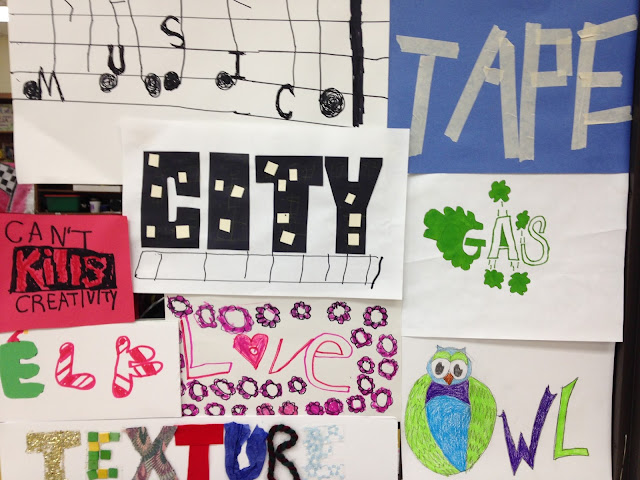 My visually impaired students were asked to  pick a word and create it using illustrative type. I had a list from which they could choose, but I was open to any of their ideas.  The word "texture" was made using a variety of textures, the letters of "music" were written on a staff as though they were actually making music. "Tape" was written using nothing but masking tape. These were fun to critique and talk about the student's thought process and ask questions like, "Could the word "owl" be made entirely within the face of the owl, or is there another kind of elf than a Christmas "elf" and what would something like a woodland elf look like in illustrative type? 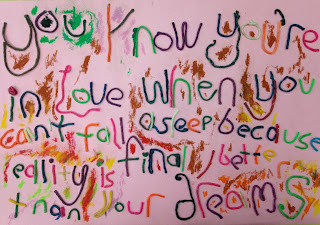 Then each student was to find a quote writing it in a way that reiterated the message. Having students find a message that resonates with them is a really great way to understand a student better. This Dr. Suess quote, "You know you're in love when you can't fall asleep because reality is better than your dreams." was done by a blind student with the help of a paraprofessional. I love how he picked colors and marks that are playful and dreamlike. Falling in love actually has the same exciting and happy feel as this representation of it.

I hope my students are more aware of the decisions made by typographers when they look at movie posters, credits, billboards, webpages, or even just hear descriptions of those things. Visual communication doesn't have to be void of words, it can be a marriage between fine art and great writing.

Posted by Kristen Applebee at 12:44 PM No comments:

Beads! I have found that even my students who are totally blind and have severe cognitive impairments, can string beads. It's one of the few assignments that almost everyone can do independently. I have a giant bin full of tiny plastic beads waiting to be strung on thin wire or pipe cleaners. 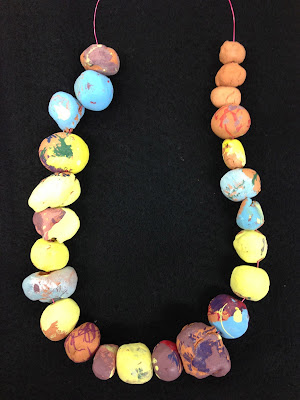 But I asked the students, who are ready for more aesthetic ownership, to make their own beads. This also worked for the students who completed their clay assignment early and had a couple days to do a project on their own.

The processes was very simple. They rolled little balls of clay and poked a thick gaged wire through each one. The clay (and the holes in the clay) shrink with drying, so some of the beads had closed up and were useless. If there is just a tiny piece of clay blocking the hole, a heavy wire and a little work can open the hole again, but it's best to just be sure they are big and straight enough when they are first made.

After firing, the beads were colored with Sharpies or painted before being strung on thin. Many of the beads were fairly large so the results were heavy, Wilma Flintstone style necklaces, but my students didn't mind. They were so pleased with the results, I may need to come up with a paper bead lesson for them.
Posted by Kristen Applebee at 7:10 AM No comments: