Hats Off to my Art Students! 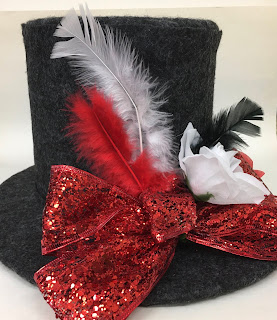 We all became mad hatters in my classroom this week in conjunction with a unit on how visual arts applies to performing arts, and in preparation for our Alice in Wonderland themed prom. It was easier and more fun than I had thought it would be, and I'm tickled with the results.  I'll share the steps to make your own below.
Students had the choice between doing a regular sized top hat or a mini top hat that can be attached to a headband and worn off to the side. Most students were able to do both by the time the week was over.

The mini top hats used card stock (half a piece cut lengthwise would be the sides, and then the brim and top were made by tracing circles on another piece of card stock. Tracing the inside and outside of a roll of new duct tape seemed to work pretty well for the top and brim.  Two 8.5"X 11" pieces of heavy paper make 2 little hats! Upholstery fabric swatches were used to cover the little hats. Because it took two or three swatches for a little hat, some times these were mismatched, adding to the charm and whimsy. 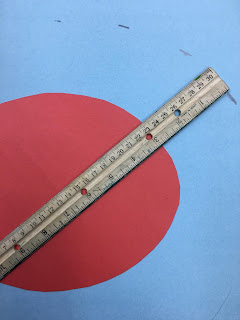 To make a large top hat , I cut a rectangle the length piece (24"-30") of poster board, eight or nine inches wide.  I wrapped it around my head to get the circumference, then traced the oval at the end of the tube onto the remaining poster board. This is definitely not perfect and needs a little tweaking to make it an clean oval.

Then I add 2.5"-3" around the oval to make the rim.  This can be done with cardboard and an X-acto knife, but posterboard is much easier to cut with scissors.  I like to keep the brim as a solid letter "O" shape, but if you need to cut a slit to get to the inner circle (for the brim of the hat) then just tape it back together. 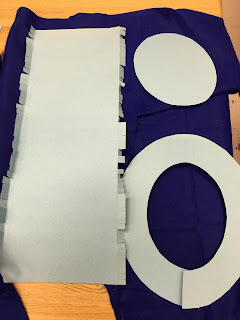 I scored the two long sides of the rectangle so that they would fold about 3/4"-1" and then cut slits perpendicular to the fold to create little tabs.

Now if you use black poster board, you can get away with a paper hat, but most of the hats were covered with fabric, and it makes sense to use your flat hat pieces as patterns for the felt before gluing the paper together. So go ahead and do that. You'll need 2 brims, one top, and one rectangle for the side. We used felt so we didn't need to worry about the edges fraying. 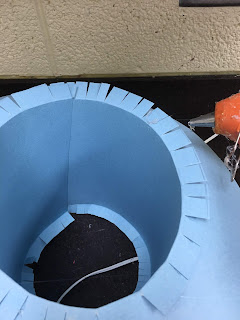 To make the fit accurate, I rolled the rectangle into a tube and let it expand into the brim.  I used hot glue around the inside of the brim and pushed the tabs down on top. Once that was finished, I flipped it right side up and pushed the other tabs in, to attach the top of the hat. 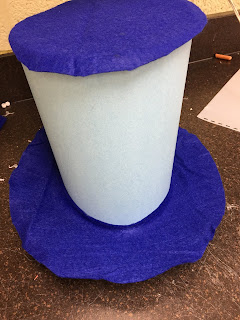 When cutting the felt, some students made the top of the hat a little bigger so the edges could be pushed down to overlap with the sides.  Others made the side (rectangle) a little taller so it could fold over the top and have a perfectly fitted oval be glued to the top of that.  Both ways worked just fine. It's probably a good idea to cut little slits or triangles out of the extra felt to have it fold down more neatly, if you are doing the top part first, however. 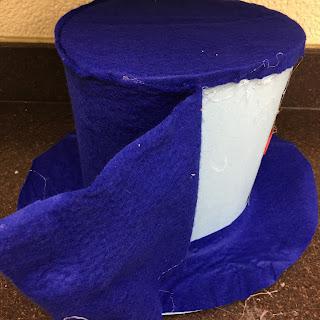 The brim of the hat just slides down and is hot glued to the top before flipping it over and doing the same for the bottom of the brim.  Again, if the fabric on the top of the brim is a little wider, it can have little triangles cut around the extra 3/4" or so and tucked under. Then the bottom of the brim can be slightly more narrow than the brim, just to cover the overlap and leave no poster board showing. Some students made the top and bottom fabrics a little larger than the poster board or card stock, glued the edges of the fabric together, and then trimmed the edges. 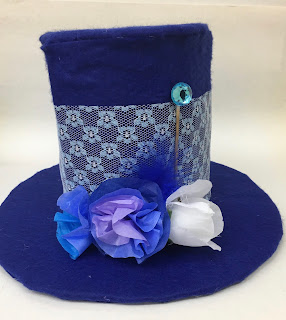 The genius is in the details.  Most of the hats looked pretty shabby until they were dressed up with ribbon, buttons, feathers, flowers, and hat pins made from painted Q-tips and fake jewels. This is when the student got a chance to show off their creativity and ability to create visual unity. 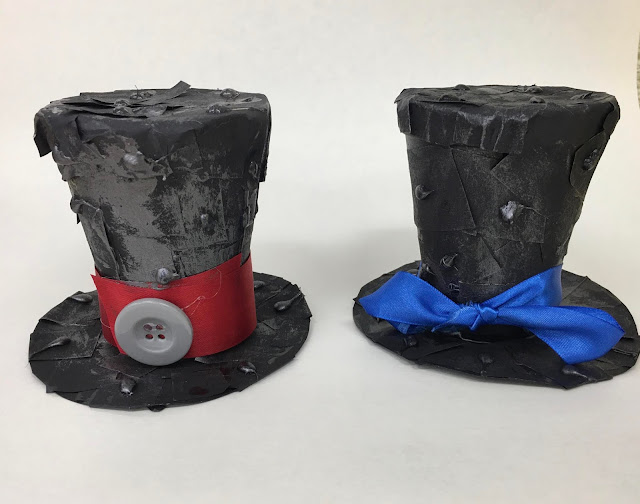 A couple of students made steam-punk hats based on a video they saw. For this kind of leathery or metallic looking hat, a foam cup, painted black. was used as the base. A black piece of card stock was cut into two circles, one for the top of the cup (hat) and one for the brim. Students used Elmer's glue to attach small overlapping squares of black construction paper and then placed dots of hot glue in the center of some of the squares like the nails or rivets seeming to hold it all together. 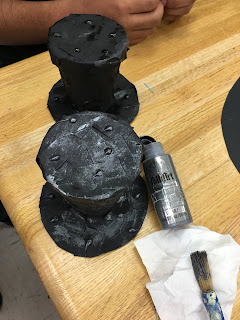 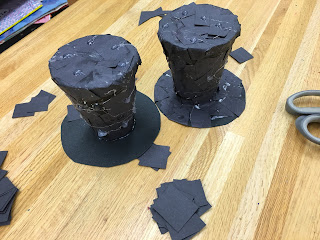 Metallic colored paint was dry brushed onto the surface to finish off the steam punk feel. 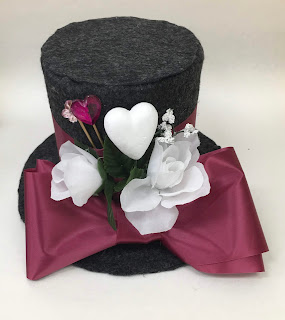 So for a a couple of hours and a few dollars, students not only learned to make a hat, but were able to explore the career of costume design, gain a new appreciation for what goes on behind the scenes for movies and plays, and help decorate for prom. 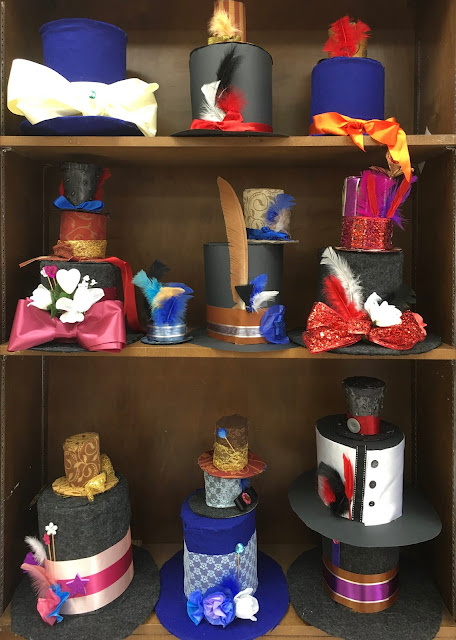 Posted by Kristen Applebee at 7:30 AM No comments: 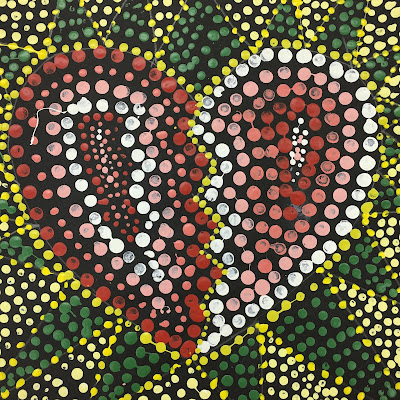 I had no idea in August, when I planned my class curriculum for the year, that the week I would be teaching about Australia, the country would be on fire. It has been heart breaking to see the damage from the forrest fires there, but the current events have made my students curious about who lives there and what life is like for them. Curiosity is fertile ground for learning. 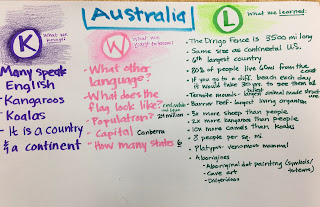 We began with a K-W-L chart, to help me pre-assess what my students already knew and what they wanted to learn about Australia and it's culture. Then we watched videos and I taught students about dot painting done by the Aborigines, who have totems and symbols to convey meaning in their artwork. Dipping the "wrong end" of a paint brush or pencil into paint and dotting dark paper to make images ended up being easier for some of my visually impaired students than I thought it would be. Wiki Stix could be used to create initial boundaries, and lines of contrasting colors seemed to pop from the black background. 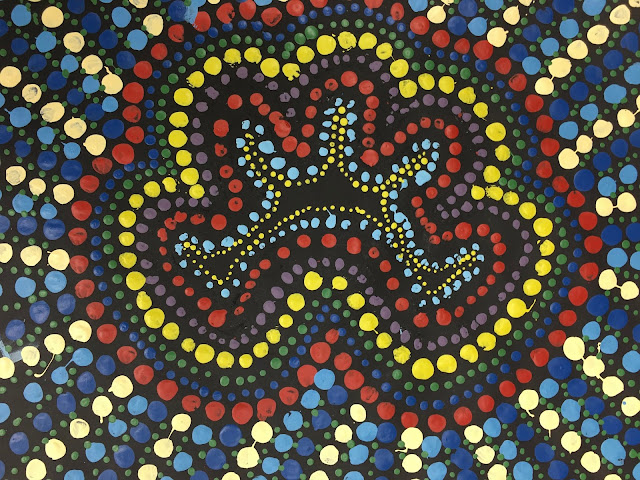 A Kangaroo paw print can be all it takes to get an image going.
I had a piece started as a demonstration but as I stood to help a student get some paint out of a jacket (this is why I encourage apron wearing) a student who is blind swept her hands across the table and smeared the paint. It's an occupational hazard and almost every student experiences their work being ruined by a peer at some point so we get pretty good at shrugging it off. I just didn't have time to do another example to show how cultures can mix by using the dot painting method from one culture to create a mandala from another. We used latex because the colors pop like Lite Brite pegs and the image becomes tactile when it dries. This is an extremely therapeutic type of painting that doesn't take nearly as long as one would think. So grab a piece of paper, some paint, and a stick and enjoy the quiet time. 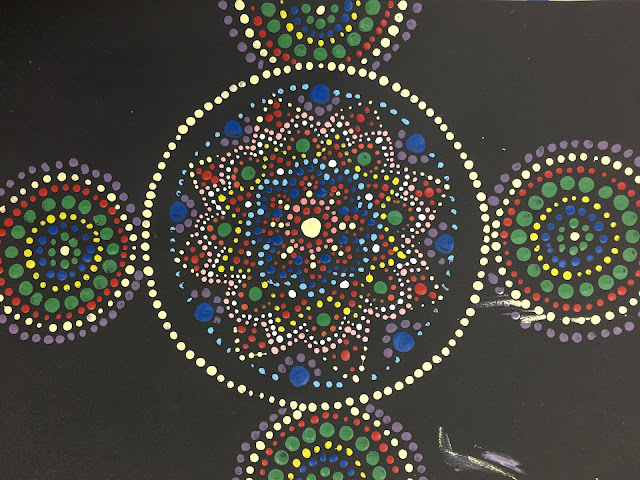 Posted by Kristen Applebee at 11:48 AM No comments: 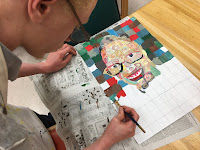 Last summer I enjoyed seeing Chuck Close's paintings in the National Portrait Gallery, which is when I decided that this would be the year to have my students learn to paint in his style. I love introducing my students to artists, who have been successful despite having disabilities, to show them that they can overcome their own challenges.  For most of my adult life, Chuck Close has been an example of someone who has made millions of dollars doing his larger-than-life portraits, while confined to a wheel chair. It wasn't until the last several years, however, that I realized that he has has also had to deal face blindness and learning disabilities.  All of my students have a visual impairment and most of them are also learning disabled, so it is no surprise that they had fun learning about Close and his work. 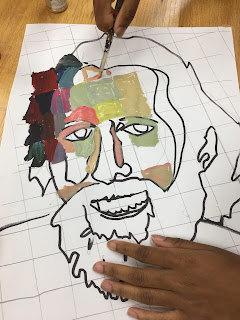 For this project, students chose someone they wanted to paint: a football player, singer, mother, nephew, girlfriend, and friend were all in the mix. Some students choose to do a self portrait.  We "cheated" by projecting images of each chosen person and tracing them onto a piece of paper.  This isn't too far to the way of Chuck Close, who has been accused of cheating by working from gridded photographs.  Who cares?  There's evidence that even Vermeer used a camera obscura, and Leonardo would have been all over using smart phones if he had been given access to them. Tools are meant to be used.
A grid was placed on top of the drawing and I hot glued all the lines for my students who were totally blind. I also helped mix paint for those students. 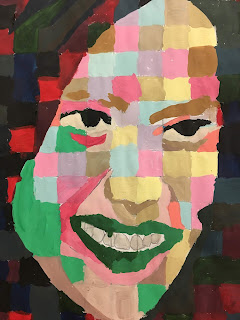 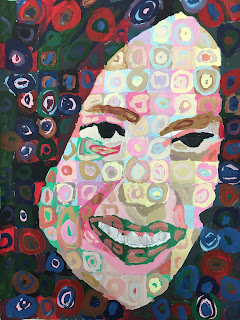 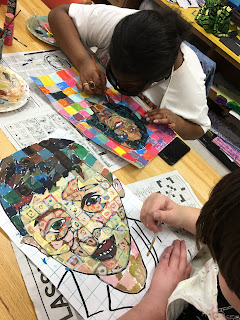 Most students laid in all the squares of color first, paying attention to the value shifts, so that shapes/ facial features could be differentiated.  Then circles of contrasting colors were placed in each square, like targets of skin and hair tones. There is usually a moment in which students say they hate their painting before working through it and coming to love it.  You'd think they'd learn to trust me by now when I tell them that it gets darkest before the dawn in art making. During our end-of-semester portfolio critique, many students choose this as their favorite project. So there were many lessons that came out of this lesson plan:  value and color, repetition and unity, patience and grit, and that your disabilities aren't necessarily liabilities. 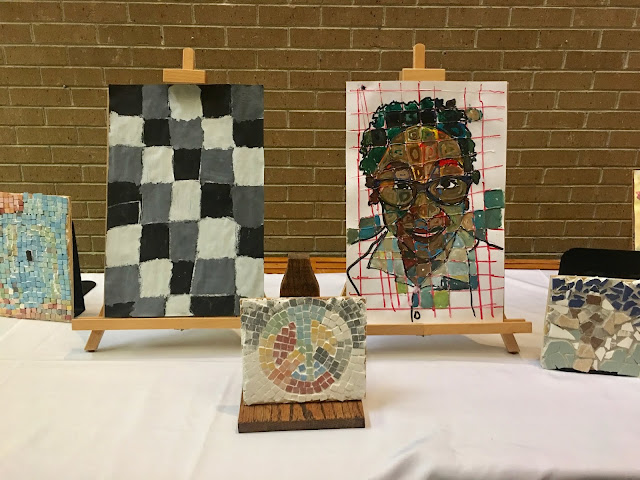 Posted by Kristen Applebee at 8:52 AM No comments:

One for All: Body Mural 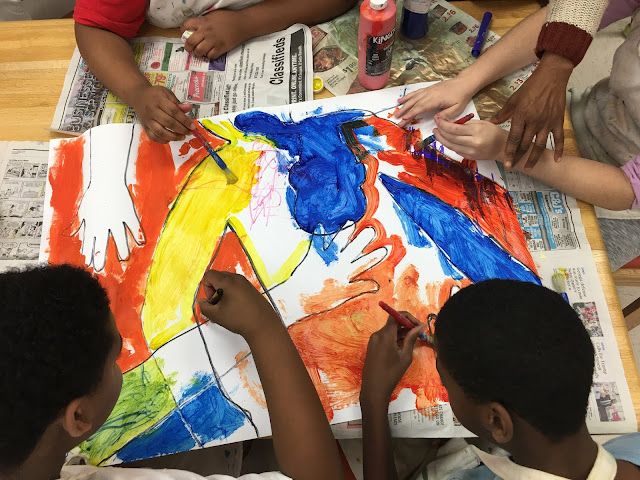 As sweet as my "special needs" students are, it can be a challenge for many of them to find their place in a group. I wanted to help my kids learn that they each play an important part of of their class and help them appreciate the roles their peers play. After inviting students to share ways that they contribute to their community of learners, I had them each choose part of their body and lay down on a large sheet of paper to be traced: usually a torso, arm, foot, or head. 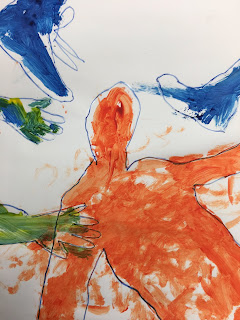 Their bodies overlapped, dividing the space into large, medium, and small shapes. I hot glued the marker lines to make it tactile for my students with no vision, and outlined them in a student-chosen color, for my low vision students. Then I let them fill in the spaces with tempera.

Just as every part of a body serves a purpose, and shape and color in the composition matters, everyone in the class contributed to the final piece. It wouldn't be the same if someone had chosen not to participate. I wish I could teach in an hour or two that every life has its place, but it will take time for them to grasp this concept. All I can do is reinforce it until they figure it out. 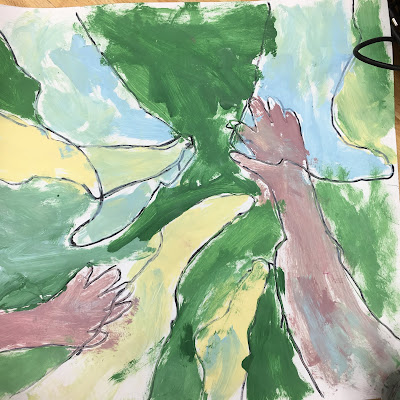 Posted by Kristen Applebee at 1:51 PM No comments: