Sports Themed Camp for the Blind 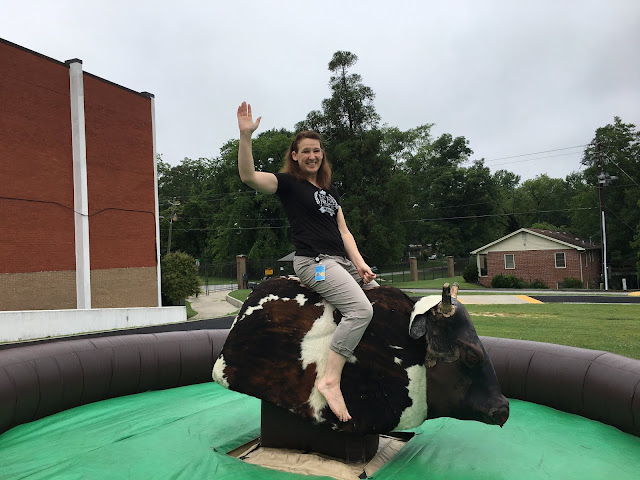 I had such a blast at last week's summer course!  Blind and low vision teenagers from around state of Georgia came together to play beep kick ball on a wheel chair accessible ball field, go bowling and  attend a baseball game! They spent a morning to do virtual fishing and hunting. Students took a tour of the Sports Hall of Fame, went swimming, and learned yoga. They rode a mechanical bull, played goal ball (similar to indoor soccer but with three blindfolded teammates on a gym court) and attended a tennis clinic with soft, bouncy, jingly tennis balls. 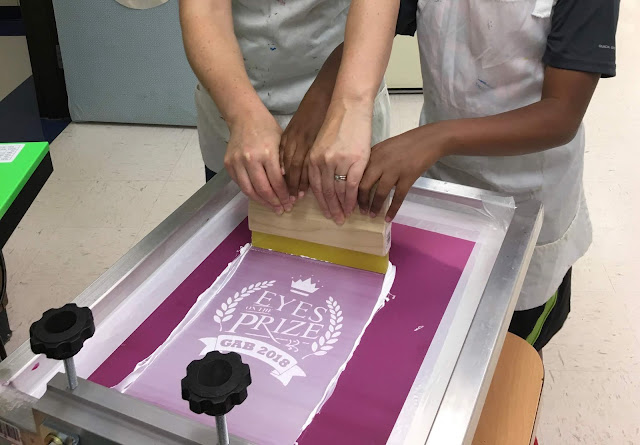 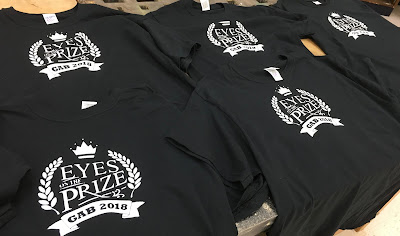 Part of my responsibilities for this program included doing art projects.  One day they screen printed their own camp t-shirt, using a silk screen I had photo-mechanically processed with a design my husband did in Adobe Illustrator based on my drawing. 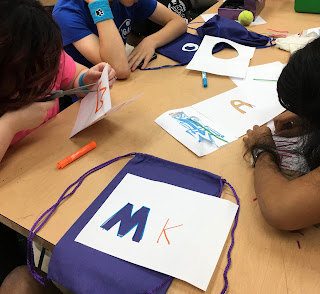 The next day, students created their original designs, which were cut out of paper for stencils to screen print on their tote bags. 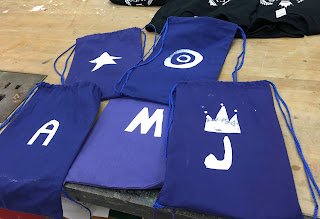 And finally they chose colors and designs to represent their own team before making into felt penants (not pictured).

I also made a sports themed photo booth to help capture the moment and save happy memories.
By the end of the week they were all worn out but hopefully feeling more fit, more confident, and more independent than they were a week  earlier. Yay for camp! 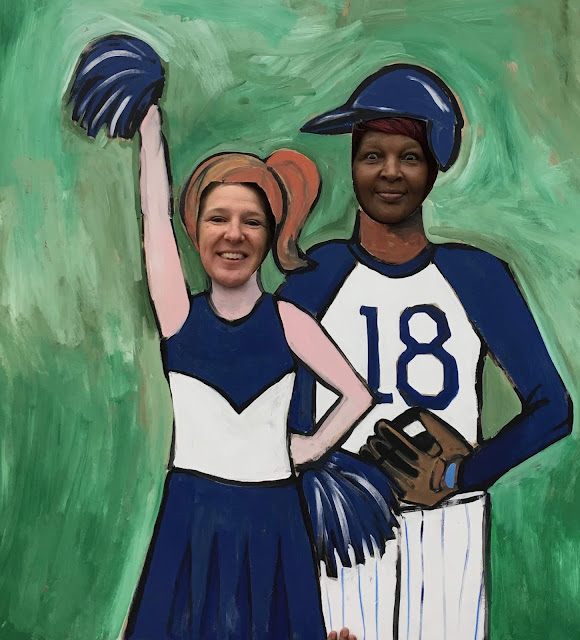 Posted by Kristen Applebee at 11:00 AM No comments: 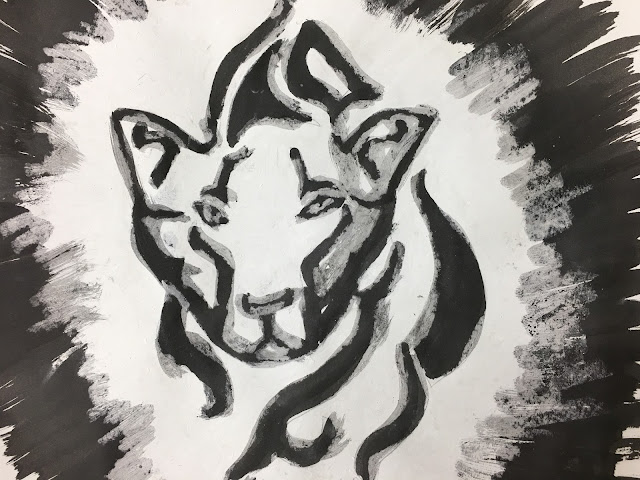 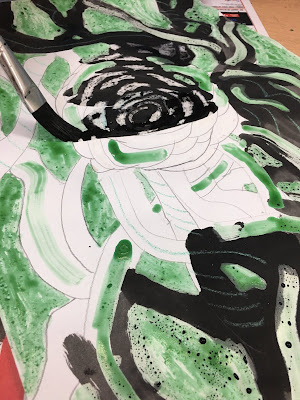 People with low vision need high contrast images more than those of us who can see subtle value shifts.  Ideally, this "wax resist" assignment would be done starting with only white crayon, or white oil pastel, but we also have liquid wax that is used for ceramics to block glaze from the bottoms of cups and bowls. There is dye in this wax to make it easier to see for those who need the some contrast to start with. So my students drew and painted with waxy or oily medium, and then brushed ink on top. The ink only stuck to the paper (although we did have to dab the tops of the oil pastel with a paper towel, to be able to see it better), to create a black and white (or black and green) image, with enough value contrast for my low vision students.

Posted by Kristen Applebee at 4:56 AM No comments:

Beach Party and Decorations to Die For 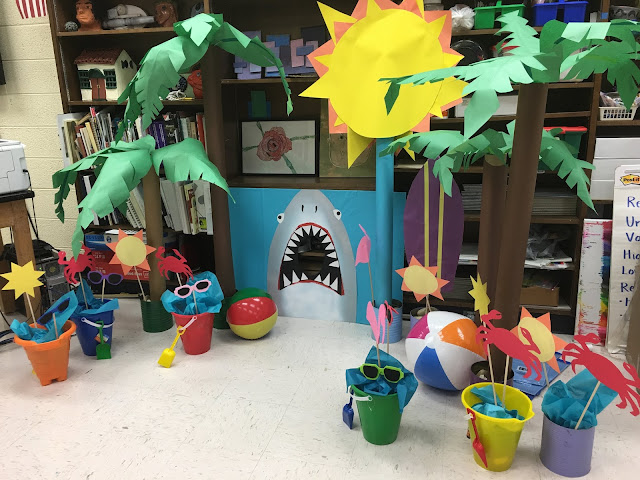 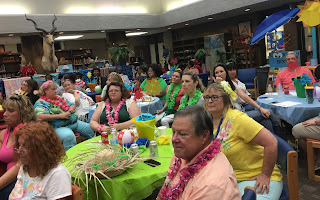 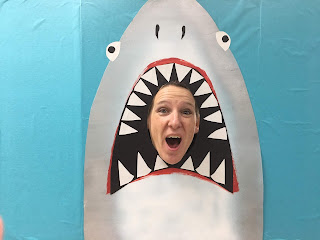 Every time Kim, our school media center specialist, asks me, "Do you want this empty laminator tube?" I hear the words, "Do you want a palm tree trunk?"  I was glad that I had accepted and saved those large tubes when I got the call to decorate a faculty party at the last minute. "Something summery" was the suggestion, so I went with beach theme on a shoe string budget. It is easy to borrow beach towels to cover all the book shelves, bring in a beach umbrella, and buy some sand buckets from the dollar store to and place foam sunglasses, crabs, flamingos, suns and surfboard, made from construction paper or craft foam and glued to dowels. A shark's mouth photo op was made from a discarded trip-fold board, and beach balls were placed around the room. Bulletin board paper cut into palm leaves were given structure by attaching aluminum wire to the bottom with green masking tape. Then the palm trees were placed into buckets or cans with sand or rocks around to hold it up. 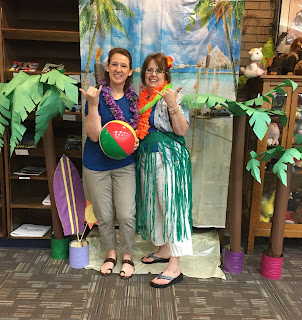 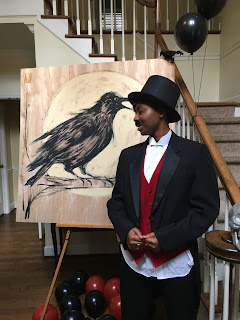 Two days later, I was invited to an Edgar Allen Poe themed murder mystery. I painted a raven for the occasion and each guest posed with it was they entered the dinner party.  The hosts had ravens and sculls in each room, black table cloths. With everyone's costume and a menu that included "crow pie" and "funeral potatoes" it was easy to stay in character and the evening was a lot of fun! Whether the party theme is a luau or murder, there are colors, costumes and little touches that can make the mood complete. 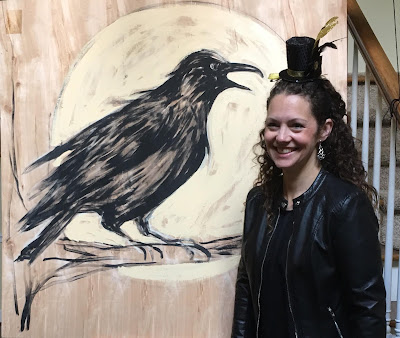 Posted by Kristen Applebee at 9:51 AM No comments: