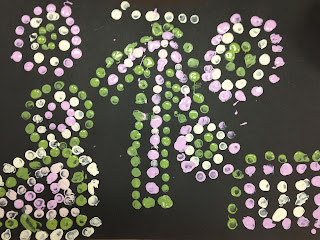 The Aborigines of Australia are such an amazing people, and most of my students had never heard of them before this week. We started Monday with a documentary to help them understand the significance behind some Aboriginal customs and ancient art. Accordingly, we began our own dot paintings.

The Aborigines have symbols that communicate meaning in their art. A single arch symbolizes a person, concentric circles are a symbol for water hole, diagonal lines represent rain, and arrows can be spears or emus. Acrylic dot paintings became popular in 1960's, but dots are used to create ancient rock art as well.

A lot of students chose to use black or another dark color as a background to provide contrast for the lighter colors. We dipped unused pencil erasers into house paint to make the dots. 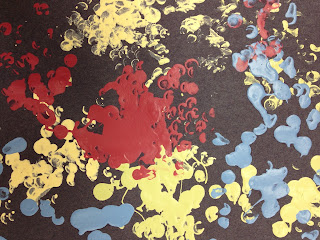 The student who made this painting has prosthetic eyes. The latex paint dots and puddles were somewhat tactile. When she felt her painting the next day she said, "Oooooo. This is really nice!" 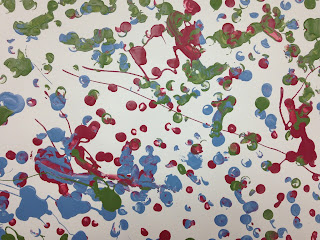 Because these paintings didn't take very long, we continued making dot paintings with dot makers and puff paint. This project was a really fun way to bridge ancient and contemporary non-objective art.
Posted by Kristen Applebee at 12:51 PM No comments: 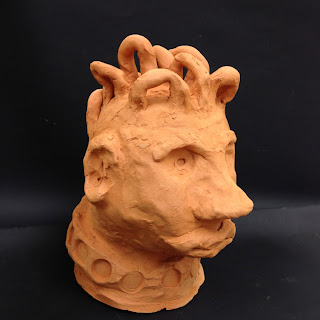 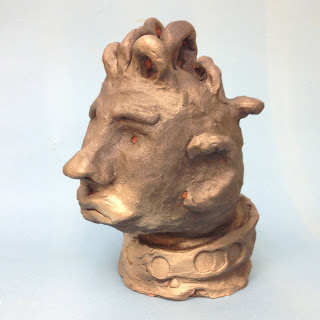 Having never made a life sized clay head myself, I was a little apprehensive about assigning it to my students. But with the thanks of YouTube and a little playing around, I managed to get the courage. I had students start with with a ball of newspaper, with a little newspaper roll or empty paper towel roll attached to the bottom. Then we made slabs of clay to wrap around the bottom for a solid neck and then  more for the head.

A line of symmetry helps provide guides for where the eyes, nose, and mouth should go. 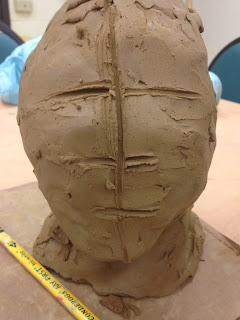 Then, clay is added and shaped in those areas. The hair is the crowning touch. Even students with cognitive impairments can pinch and place little pieces of clay, or roll coils for braids and dread locks. 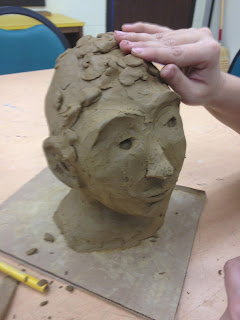 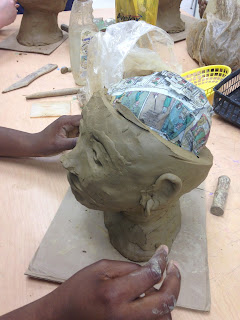 Once it looks finished, we slice the top of the head off with a wire cutter, to remove the newspaper. One problem we found was that the clay was still too soft. I was taking some of the students on a multiple-day field trip, so I was trying to fit a week-long assignment into 3 days. A few of the heads started to collapse. It's better for the clay to be almost leather hard before taking this step.


We smoothed out the inside and then slipped and scored to rejoin the top of the noggin. 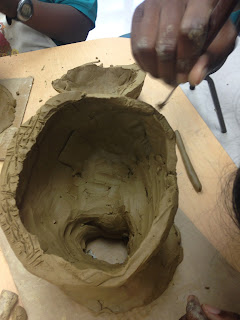 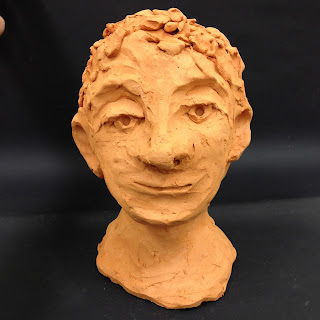 Then we bisque fired the pieces. 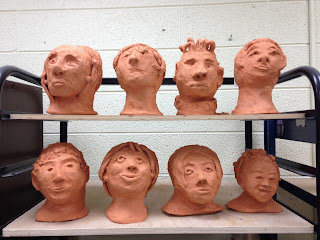 Some of the heads were painted with acrylics and a few of them sold at a silent auction fund raiser. Others were glazed. I think the students really enjoyed this project and I love that little their personality comes through with each face.Students glazed or painted their pieces 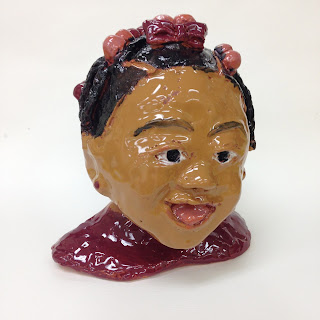 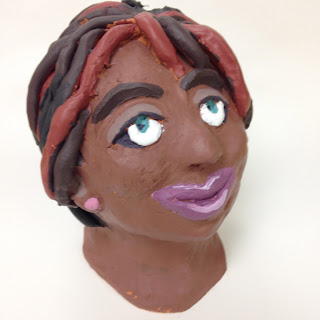 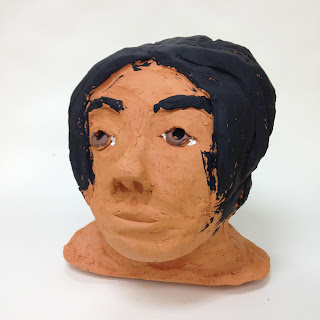 Posted by Kristen Applebee at 12:14 PM No comments: 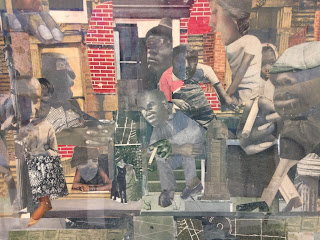 The idea of collage and school assignments has always left a bad taste in my mouth. My experience has been seeing poster boards divided into food groups by elementary school students with poorly cut magazine pictures sloppily glued into poor compositions. 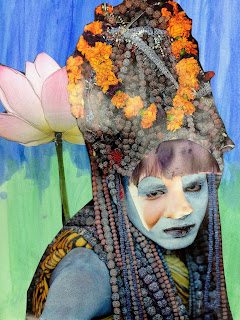 Introducing art students to the Harlem Renaissance master, Romare Bearden, increases the chance that some decent looking images come out of a collage assignment.  I had my students look at many of his works, like the poster above, (The Dove, 1964) and talk about how crowded his urban images were compared to the rural counterparts.

We talk about not just stealing the face of a recognizable celebrity but also creating an original face or figure through morphing several people into one. If they play it too safe, I tell them that it hasn't reached the Bearden level of "wonkiness" yet. It helps to give numbers; for example, each face should be made up of at least three different photographs. The student piece to the right began with water color. Bearden often painted paper to incorporate to his collage pieces. 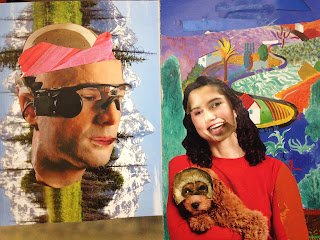 Symbolism is important to communicate meaning in literature, music and art. Bearden often used a train in his artwork. This is a symbol for the Underground Railroad, as well as northern migration of African Americans in general. Trains also provided decent jobs and upward mobility for many African Americans in our country's history. Two of my students chose to use lighthouses (see below) as their symbols of things that enlighten or bring one into life's safe harbors.

Romare Bearden was truly a Renaissance man; he worked in many mediums of art, including literature and music. He spent a lot of time at jazz clubs, and was acquainted with some of the greats, like Duke Ellington. Bearden would sometimes draw the music he loved so much, with lines and marks. I love when music directly ties into art lessons. My students enjoyed listening to some big band jazz while they worked. The music helped them stay engaged in their projects.

Posted by Kristen Applebee at 12:51 PM No comments: