There's something about Earthworks (aka Land Art) that make my heart sing!  After spending so much time teaching Pop Art, which is so much about consumerism and mass production, it was nice to take a week and ask the question: Is it a good idea? Does endless consumption make us happier?  It is not a coincidence that the year Robert Smithson created Spiral Jetty on Salt Lake (1970) is also the first year that Earth Day was celebrated. The Cuyahoga River caught on fire in 1969. No joke! This prompted a lot of activism that led to the Clean Air Act of 1970 and Clean Water Act of 1972. A couple weeks ago marked 40 years of the partial meltdown of Nuclear Plant Three Mile Island, which was close to my childhood home. So there's a lot to be said about people, including artists, being connected to the natural world.

I showed my class the "Rivers and Tides" a documentary on the work of Andy Goldsworthy. It's a beautiful film (that required a lot of audio description on my part for my students who are blind), but it is also packed with life lessons about noticing things, working intuitively, embracing impermanence, and not losing your cool when everything falls apart.  As a class, we strolled the campus looking for dandelions, purple leaves, and subtle rock colors before arranging them in places that might surprise someone passing by.

Posted by Kristen Applebee at 9:44 AM 2 comments: 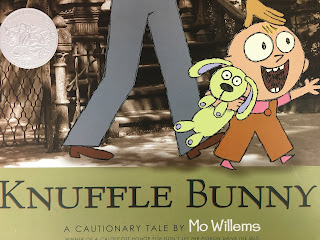 Illustrator Mo Williems has a very simple style of illustration, and flat but expressive. In his Caldecott award winning book Knuffle Bunny, these characters are imposed onto black and white photographs, giving us a detailed feel for the New York setting.

My students loved the book and enjoyed the group exercise of developing characters based on their gender, age, family placement, time, place, what they wanted, and what was keeping them from getting what they wanted.  After a couple of group characters, each student created their own list of characteristics and a drawing of their character. These were then placed onto a background (magazine image) via collage. The students were fascinated by the illustration process and ticked to get to introduce their creation to their classmates. 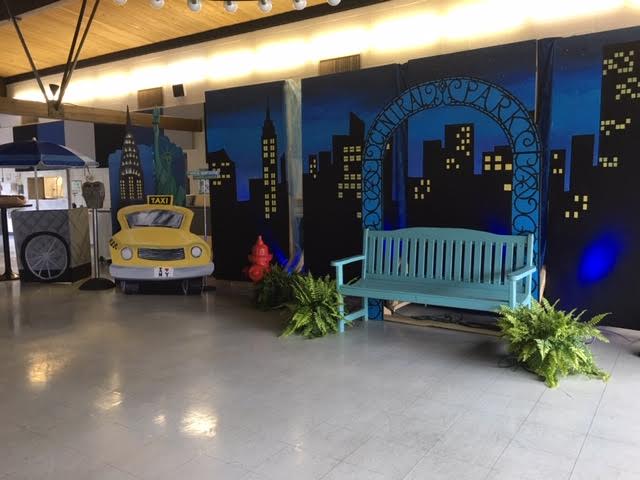 I started thinking about this prom a week after last year's prom, and now that this year's prom is over, I can start thinking about next year's prom. Our high school seniors voted on a New York City Prom and so I tried to make a huge impact with what totaled $120 in new decorations (mostly paint, and one large piece of birch and a couple hinges). I wanted enough skylines to fill the space. 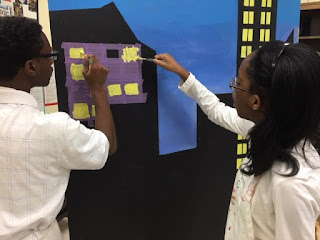 I started by projecting a skyline that included the empire state building onto four 8' panels, and outlined it in black for students to paint the large silhouettes of buildings. And I taped out windows for them to paint yellow. (I had also screen printed some windows, but wanted students to take part. It took a couple layers of yellow to cover the black). An arched gateway for Central Park framed a park bench with ferns for a photo spot. 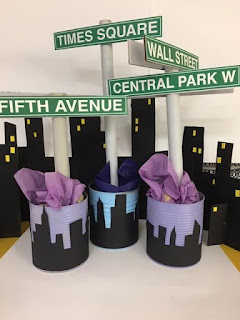 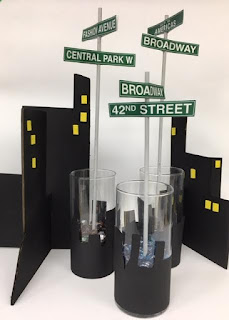 I used black paper to cut skylines and glued them to glass vases and painted no.10 cans. I filled these with glass pebbles to hold mini street signs. The signs were printed and the posts were painted wooden dowel or cardboard tubes.  The day of prom I made corsages and the leftover flowers were placed in the glass vases. Building shaped cardboard was painted black and slits were used so that two shapes could create a 3D set of sky scrapers with yellow foam rectangles for windows. One sheet of sticky craft foam made about 12 table toppers. 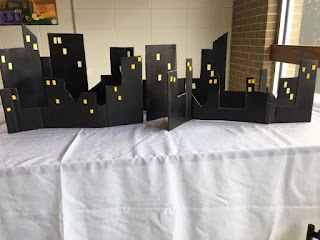 Longer pieces of cardboard (from frame boxes) were used to make skylines that zig zagged along serving tables. 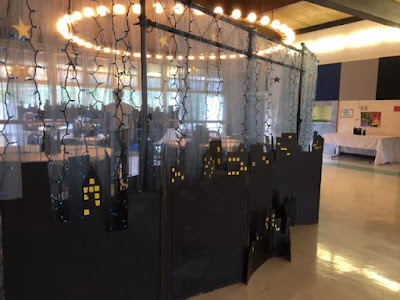 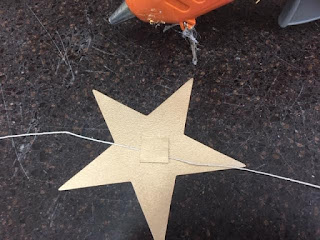 Very large refrigerator boxes were painted black for skylines that sat on the floor for a divider between the dance floor and the refreshment tables. Yellow masking tape was used for the windows.  Blue tulle was hung with a dozen strings of blue lights to create a sky background to the divider. We cut star shoes from paper and spray painted them gold. Small gold squares sandwiched hot glue and string for star garlands. These were hung on the divider (mostly because at this point I was too tired to get a ladder and hang them from the ceiling lights. 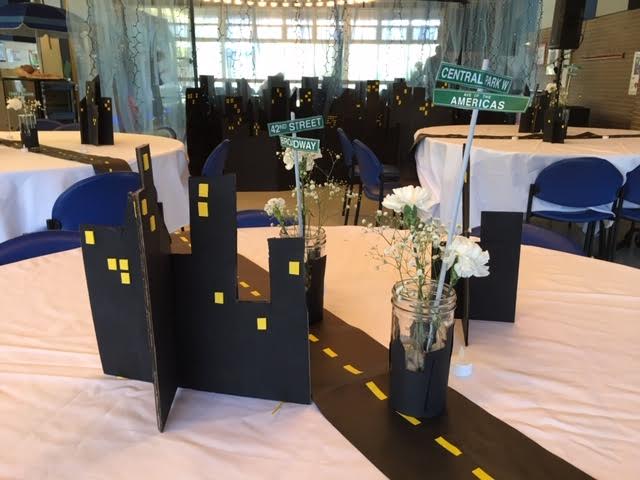 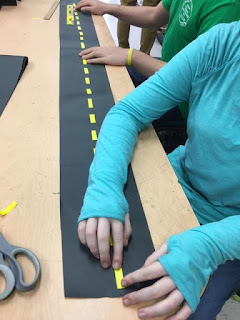 I cut black bulletin board paper into long strip, and halved the width of yellow masking tape to make divided streets as table runners. You can tell which parts are done by my students who are completely blind because they're a little more wobbly, but that adds to the charm.

I also cut large skylines from black bulletin paper to run the length of the windows on either side of the room.  Yellow chalk windows were drawn on those skylines and ice-cycle lights hung above.


A large piece of plywood (leftover from a play), was used to make a taxi cab. An 8'X4' piece of birch was cut in half and hinged to make a statue of liberty and Chrysler building back drop. 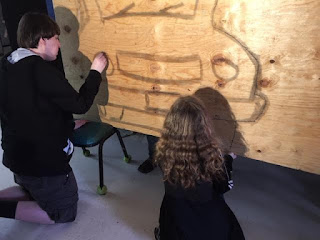 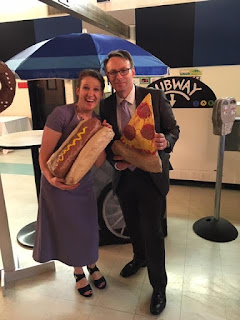 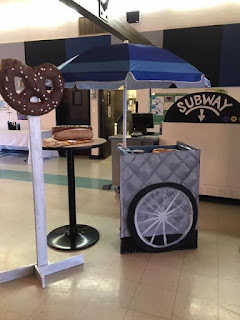 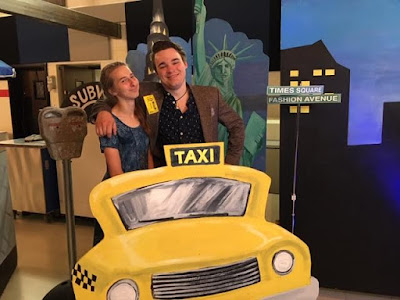 I painted a large piece of cardboard to make two sides and a wheel for a hotdog cart. Then I attached the cardboard and my beach umbrella to a library cart using Duck tape. Our paper mâché art projects of New York foods (hot dog, soft pretzel, pizza) became photo props. 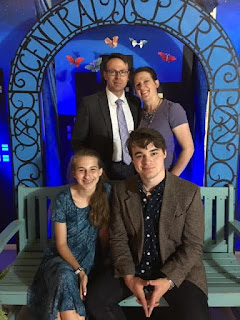 A colleague donated her parking meter and fire hydrant to the city scape. (She just had them lying around!) We used microphone stands as sign posts for larger street signs than the table toppers.

My husband and two of my kids came to enjoy prom last night, and had a great time watching my students enjoy the magic of youth!

Now that all of the decorations are out of my classroom it feels a little empty, much the way the house feels bigger, cleaner, and less festive after all the Christmas decorations are put away for the year. Speaking of next year....I can hardly wait for the class of 2020 to pick their prom theme so I can get busy! 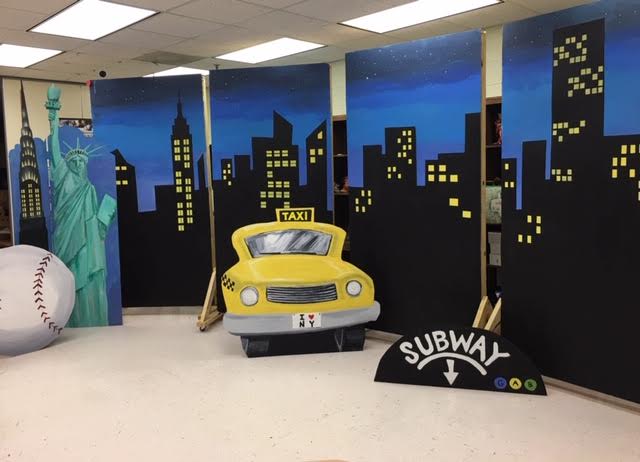 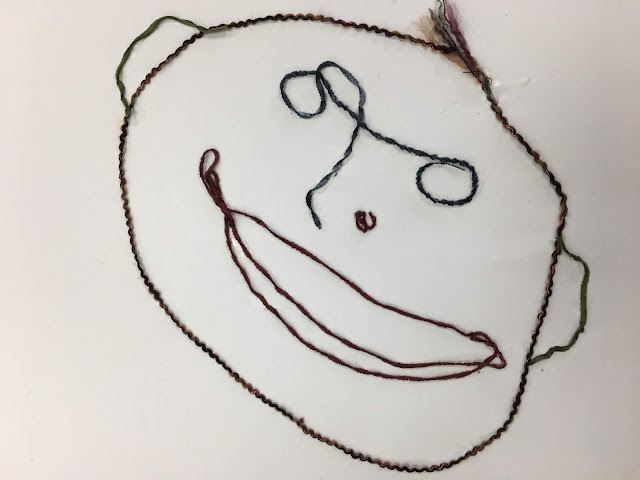 After giving a slide lecture on the element of design:  LINE, I had my elementary students create contour drawings from yarn.  Some students just did clumps or strands of yarn, while others attempted to represent horses or figures with long  hair.  The piece above started out as a still life of fruit, but once this 4th grader stepped back and looked at the banana, he decided to make it into a smile, making a banana mouthed man with yarn frayed hair.  I told him I loved it so much that I would share it with all of you!