It has been a month since the WIK 13 (Writing and Illustrating for Kids) conference in Birmingham at which keynote speaker, Matt de la Pena, made his call to “Plagiarize life!” For me, the idea that plagiarism can be a good thing echoes Picasso’s claim that “Good artists borrow. Great artists steal.”

No one is suggesting that we break any copyright laws.  Lazily slapping your name on someone else’s work does not make it yours. I believe that the spirit of these two mandates to “plagiarize” and “steal” is more about internalizing ideas and making them your own. It is about noticing, applying, and transforming. There’s nothing lazy about it.

When non-writers briefly meet a girl at a party named Charlie, they think “cool name” before walking away and never giving it another thought. When writers meet Charlie, they think “cool name for a meat-and-potatoes girl with a gift for sarcasm. This will be the friend of my protagonist in my next young adult novel.” Never mind that “Miss Marple” and “Eleanor Rigby” are the names of real people. Agatha Christie and Paul McCartney own those names now.

Of course writers take more than names; they borrow, steal, and plagiarize personality traits, feelings, and experiences. They steal from their own life!

Having a place (be it a poem, journal entry, stand up comedy routine, or screen play) to channel your experiences is a gift. A writing-mindset can turn unpleasant and uncomfortable experiences into stories. It can turn a painfully inefficient carpool lane into productive work time. It can turn drama queens and energy leaches into interesting characters.

Say your boss chews you out you in front of your co-workers. You could be filled with humiliation and hate. You could climb under a rock. You could plan your vengeance. OR you can step outside yourself and notice his popping eyes, the harshness of each word’s consonant sounds, and the stabbing, accusing finger. You can empathize with people who deal with rage-filled control freaks. Now you are qualified to write a believable scene about a child being bullied by his teacher!  You can exercise poetic justice on the pages because writers get the last word.

Embarrassing situations are easier to laugh at when you get into research mode. When you are focused on documenting an experience, you aren’t focused on yourself; when you are experience-conscious, you are less self-conscious.

Tonight as I pulled a cookie sheet of taco shells out of the oven, the kitchen filled with smoke and a burned chemical smell. One bite was one bite too many. When I checked the date on the box I realized that they had expired two years ago. (Obviously we Applebees don’t eat hard-shelled tacos very often).

“Good news!” I said, “These aren’t poisoned, they are just really old. We can still trust the company.”

“We can trust the company but we can’t trust you,” one of my sons chided.

I immediately remembered the dinner scene where Ramona and Beezus Quimby realized that they were eating tongue and that they could no longer trust their parents. I had to wonder if Beverly Clearly had ever unknowingly been fed or if she had ever fed some unknowing child something suspicious like cow tongue or rancid tacos. Her Ramona stories always ring true to me.

It is good advice to write what you know. The bonus is that through writing, that you can know more, just as an artist learns about an object from drawing it. Ideas are infinite as long as we continue to observe, notice, transform, and learn from our lives. 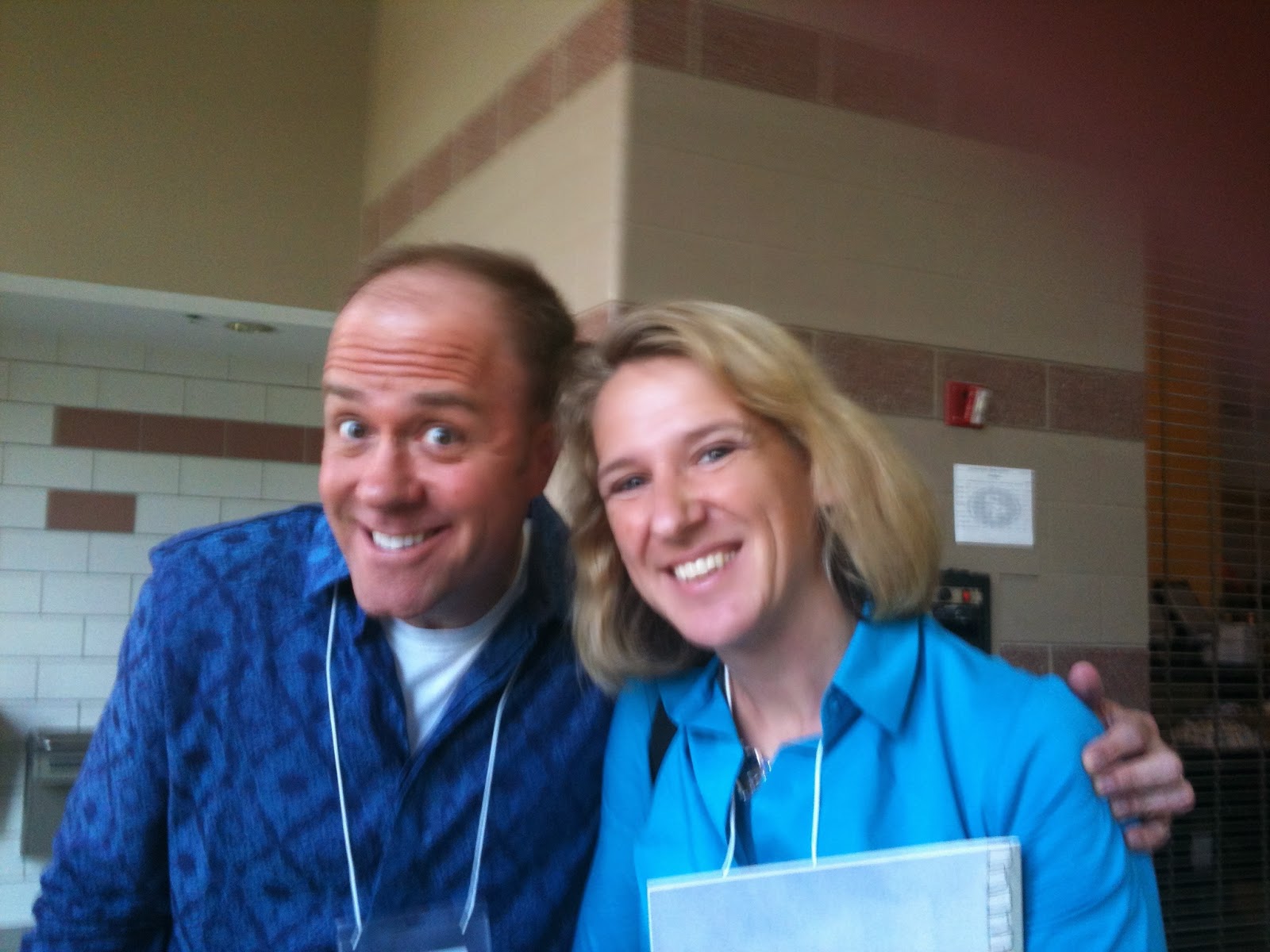 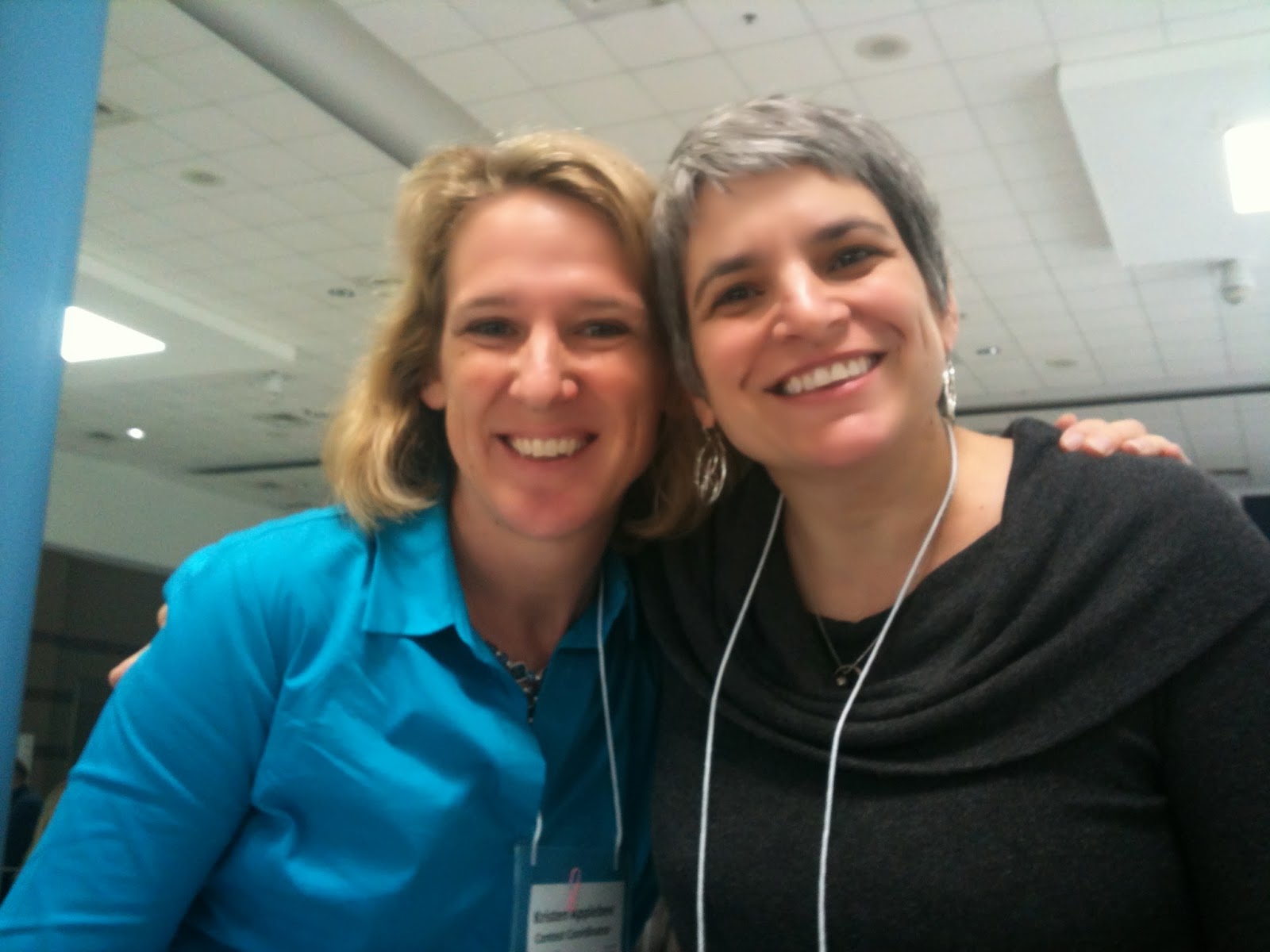 If You Can't Be an Artist, Befriend One

I was reminded of this a couple weeks ago by an NPR story about an old art friend of mine, David Babcock, who had just broken the world record for knitting the longest scarf while running a marathon. The scarf was 12 feet long, doubling the previous record for marathon knit scarves.  While some may be confused by this story, it makes complete sense to people who know David.
Which prompts the question, “What is the deal with artists?” (Other than the obvious and BY FAR the most important thing, which is of course that they make art.) Forgive my nostalgia as I reflect on my college art friends, and some common threads between them. Here’s the deal: 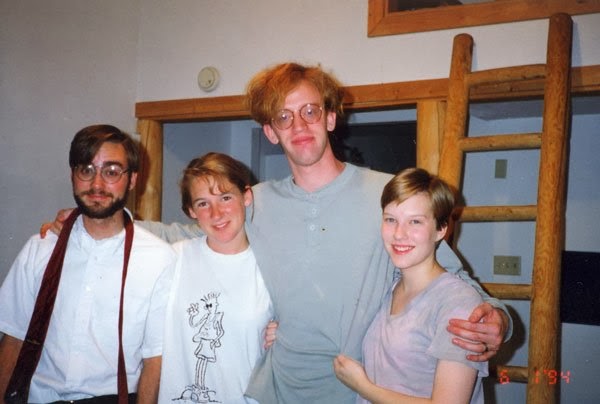 All of my college art friends have experimented with new media because being an artist is bigger than being a glass blower or painter. My friend, Chris Lynn studied painting and ran galleries, yet he and his wife, Maria Samuelson, created Blobby Farm, a place where his doodles become chic, plush…uh…blobbies. As executive director of Cleveland's, SPACES, he invited people to bash TVs while singing karaoke. Spectators sat on a set of “bleachers” made from used sofas. He's not afraid to try something new. 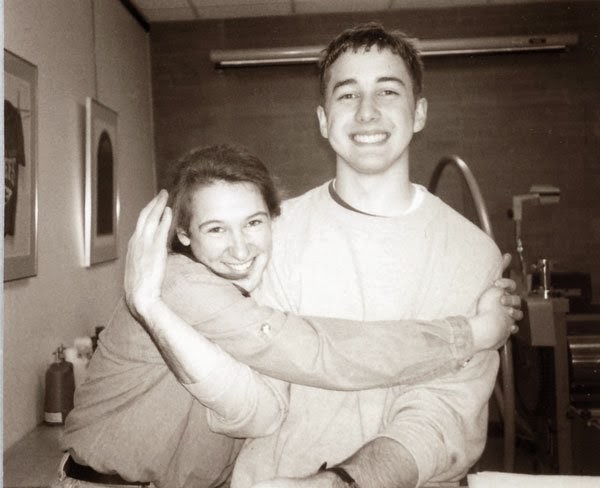 When asked why he knit that crazy long scarf while running a marathon, David said, “The short answer is because I can.”

That CAN-DO/WHY-NOT? attitude is a must to anyone who wants to live an artist’s life. The world discourages aspiring artists with threats of failure and destitution, but real artists find a way. One year, as newly weds, my husband Dennis and I had eleven sources of incomes listed on our tax forms. We were both active at exhibiting and selling art, we worked as studio assistants and adjunct faculty at Ohio State. Dennis freelanced for a design studio; I tutored Japanese families for Honda. We, along with some friends also started a web development company just a few months after buying our first computer. Why not? Other people could do it. We could too.

This attitude has allowed Mandi Felici to use her degrees in sculpture and textiles to pursue interior design, start a catering business, create flower arrangements, design Ikea store displays, build giant stork nests, and make a shelf piece full of little jars of dirt she’s collected from around the world.
She sees something she wants to do and then she does it. It is that simple.  Scuba diving? Learned. Master gardening? Certified. Meditation retreat for women? Hosted.

Can you see why having an artist in your life would be a good thing? Here I am with best friend Mandi in her installation, Current.

I spent my Sunday dinners in graduate school with a small group of printmakers plus one ceramicist. Somewhere between the chicken etouffee and an episode of the Simpsons, Rob (Boy Genius) Stephens would entertain us with, say, an impromptu discourse on Chinese foot binding, inspired by a woman he’d seen using her knuckles to work the cash register because her extra long nails rendered her fingertips useless.

Once, he hand printed lithographs of kittens onto sticker paper with a seal that designated the stickered sites as “officially cute.” Then he hung them in dangerous neighborhoods to help people feel at ease. The world makes more sense when you can see a connection between tiny feet and long fingernails, between cuteness and safety. A sense of humor doesn’t hurt when navigating through life either.

4. Artists can look at one thing and see another.

In learning to draw portraits, beginners say to themselves, “Now I’m going to draw an eye.” Then they proceed to draw a football shape with a circle in the middle—a symbol of an eye—not something that actually looks like an eye. The trick to observational drawing is looking beyond the eye to the shapes and value contrasts that will ultimately make a believable rendition of an eye.

This skill of envisioning allowed David to look at a giant stop sign and see the top of a kitchen table that could seat eight. It allowed our former professor, Joe Ostraff, to look at a sandwich vending machine and see a way for us to sell small works of art. It allowed my friend Valerie Atkisson to see beyond her homemade paper Christmas card to a business selling nativities made of precious metals. 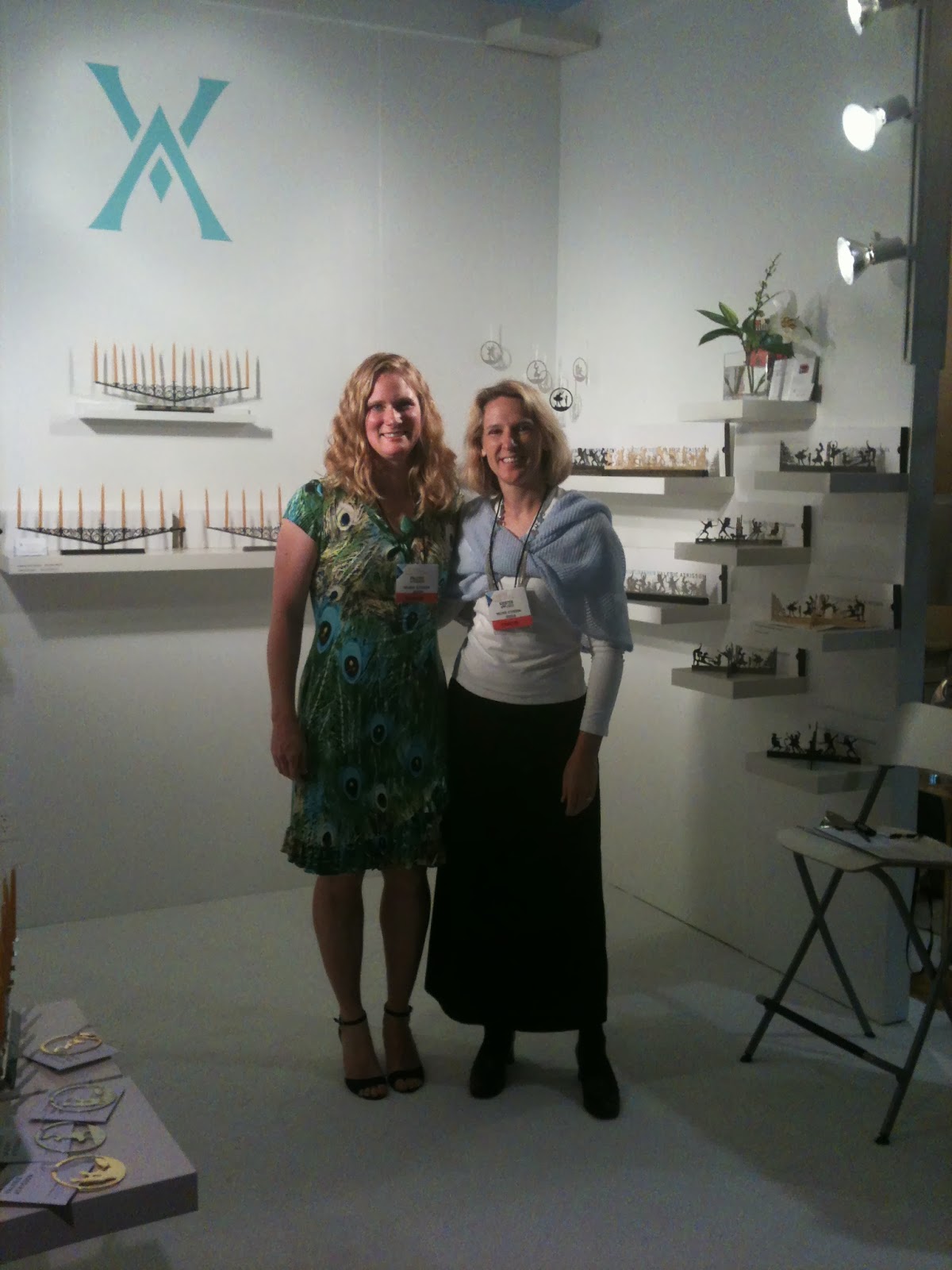 Valerie and I at her design show booth this year.

They are generally willing to take the emotional risks that make real friendships possible.

The few things I listed are not true for every artist. But they are true for the artists in my life; and my favorite thing about being an artist, is getting to have fascinating people in my life. 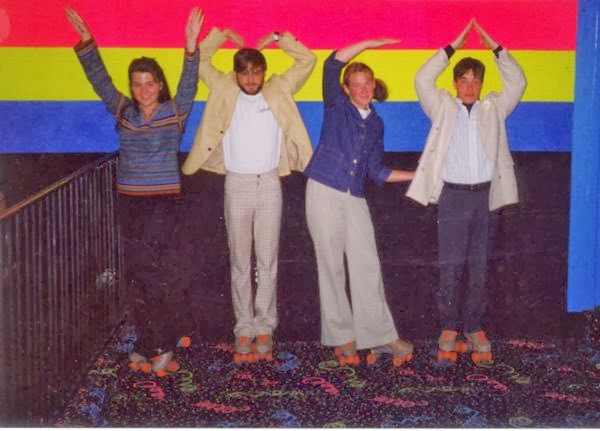 Above: Disco skating. Mandi, David, me and Doug Flandro