Our Art class unit on visual balance has included projects for symmetry, asymmetry, and radial balance. During week four we learned about crystallographic balance by studying the works of Andy Warhol. Andy was a boy from Pittsburg who ate a lot of Campbell's Soup. He believed that art could be produced for the masses without compromising quality. He took Pop Art up a notch or two when he started wearing a gray wig (in his 20's), called his his studio a factory, and made a movie of himself eating a hamburger. His iconic Campbell's Soup can paintings in 1962 were hung on a grid. His screen prints of popular icons such as Marylin Monroe or Liz Taylor, were often printed on a grid. This grid type composition is how crystallographic balance is created. It is like a tessellation or wall paper and can go on and on, the same way crystals grow. 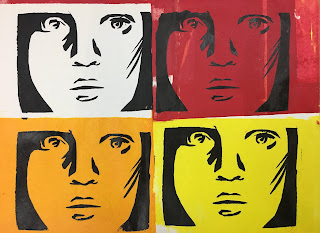 I had my students use the iconic pop artist's medium of screen printing as well as one of his compositional devices.

Some students chose to print out faces of people found on the internet. These were cut to make paper stencils for the screen.

Others created their own shapes to print a shape several times before making a different shape for the next run of color. 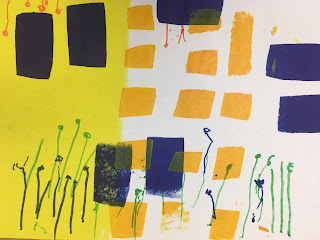 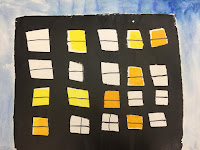 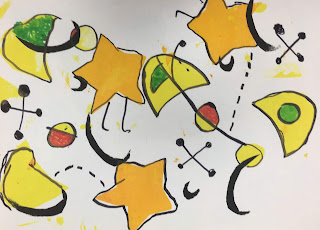 One student, during a slide show, saw a painting by Juan Miro, pointed to the Calder-style mobiles hanging above us, and said, "Hey that looks like those!" That was the first time that I had noticed the relationship between the two artist's styles. Before a couple of weeks ago, I didn't even know the two of them were friends. Some of my students chose to borrow Miro's whimsical and organic style of crystallographic balance, and use lines and symbols to tie the shapes together. 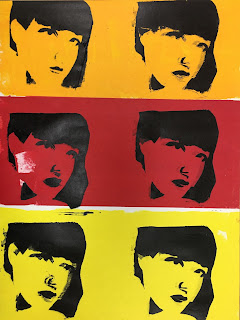 This type of project is easiest when done in small groups of people who share the same ink color for each run. But even with my small classes, it was driven home that there are many ways to find balance in a work of art.
Posted by Kristen Applebee at 11:38 AM No comments: 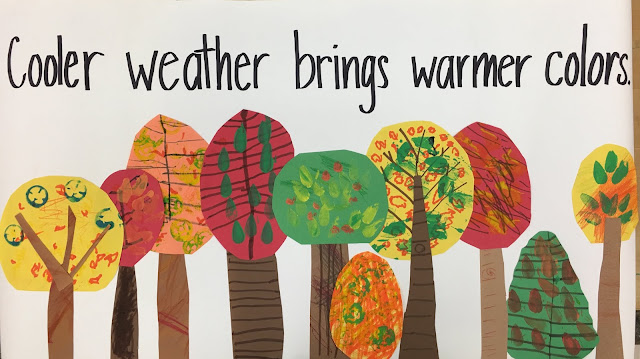 Fall doesn't feel like fall with out golds and rusts to help us enjoy the transition. To introduce my lower functioning students to the concept of warm and cool colors I tied it into seasonal changes. Ginko trees turn yellow, maples turn red, and magnolia trees stay green. Students each made a couple of trees by coloring and stamping warm colored  paper, which was cut into simplified tree shapes.  Glue sticks turned paper into collages. Each student made one tree to take home and another to contribute to the giant banners that were laminated just in time to welcome the first day of Autumn. 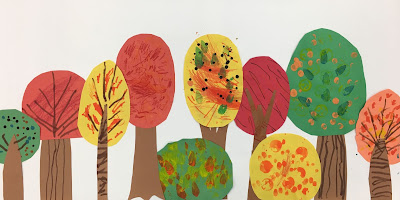 Posted by Kristen Applebee at 3:23 PM No comments:

Our unit on Visual Balance in Art has continued as my students learned about radial balance by creating mandalas. 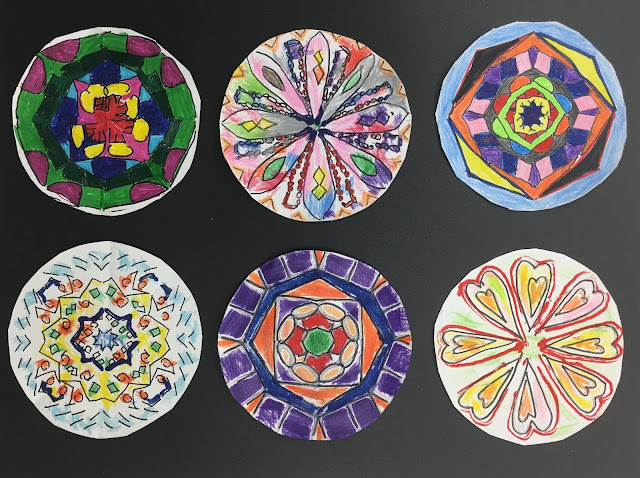 Radial balance is similar to symmetrical balance in that if you fold the composition in half, it will be the same on both sides. The difference is that you could fold it vertically, horizontally, or diagonally, and it will always be about the same. A daisy or a bicycle wheel are great examples of radial balance. So are mandalas (Sandskrit for circles), which represent a wholeness such as the universe. 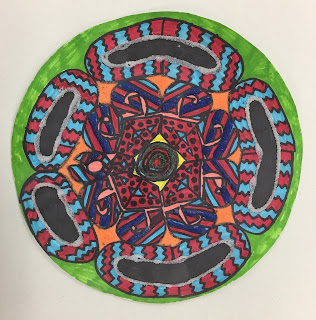 I shared a video of Buddhist monks creating mandalas to my students. It is a tedious, time and labor intensive task to create a beautiful mandala from colored sand, only to have it brushed away.  Why did they make it?  Before even watching a video, I ask my students why anyone makes art. Student answers included that it is fun, or because artists want to make money or become famous. Some talked about self expression or leaving something behind for posterity. But none of these answers apply when it comes to Buddhist monks making sand mandalas. These monks believe that the act of making the mandala actually changes them. They are inviting various Buddhas to come and exist within the mandala during the days of its creation, and that by the meditative process of creating that those involved will gain greater compassion for example. They are learning precision and gaining stamina. After it is completed, the sand is brushed away, teaching the impermanence of things and the importance of appreciating life in the moment.

Certainly, art has changed me. Art requires patience and the courage to take risks. The qualities acquired through art making can spill into other areas of life. 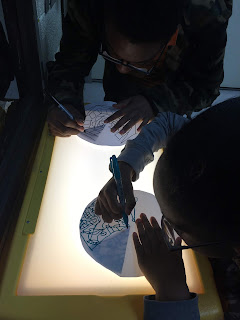 To make their mandalas, my students took pieces of card stock, made a square, and folded it diagonally, in both directions to make an X, and then folded it horizontally and vertically, so that there were four folds intersecting at the center to make 8 divisions. They used a compass and scissors to make a circle, and then a piece of pie shaped paper to fit into an 8th of their circle. They drew a pattern which was then traced on a light table on window, flipping the image each time. In other words, every other pie shape had the image facing right, and the remaining spaces had the image facing left. For those who were blind, I traced the template they drew, for them, first in Sharpie and then in hot glue. They were responsible for coloring the tactile shapes with colored pencil or marker. 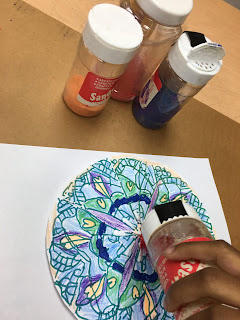 Finally, some of the shapes were filled in with glue and sprinkled with color sand, not only to reference the Buddhist sand mandalas, but to create a more interesting tactile effect. When I heard complaints about the physical discomfort from leaning over a light table, or the frustration of having to start over when huge mistakes were made, I would remind them of the days or weeks of back breaking work for the monks to make theirs. Everything worthwhile requires sacrifice of one sort or another. And once the projects were completed, all of the reasons for complaining had been forgotten, for the joy of having made something come into existence that wasn't there before. 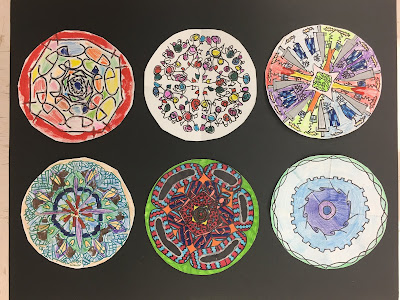 Posted by Kristen Applebee at 10:14 AM No comments: 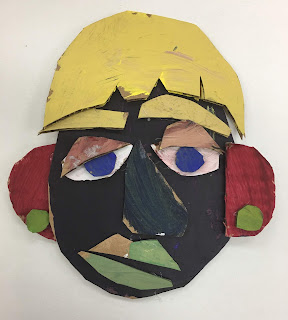 When you have students with multiple complex needs, sometimes, the learning target is as simple as helping a child realize that faces are symmetrical. I try to spice lessons up with stories from art history, such as relating last week's wire faces to Calder's wire portraits. This week's review of the lesson's learning target "understanding that faces are symmetrical" included background in Picasso's dis-proportioned faces inspired by African masks. I had a little "shop" where students could pick out pre-cut cardboard head shapes and face parts, but my higher functioning students were able to create their own shapes from cardboard.  Students chose colors and painted each shape before arranging them to glue together. 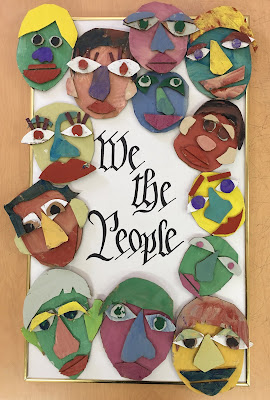 I found out at the last minute that the state education offices at the capitol were looking for student artwork, about the constitution, to display.  Of course we'd talked about the importance of the balance of government in our first lesson on balance, but there was no time to have students make artwork specifically about the constitution, so I took all of these cardboard faces, with their Picasso eyes and Muppet toned skins and made a collaborate piece entitled WE THE PEOPLE.  Any quirkiness, impairments and disabilities my students have certainly does not prevent them from being one of the people, for whom the constitution was written.

Posted by Kristen Applebee at 11:02 AM No comments: