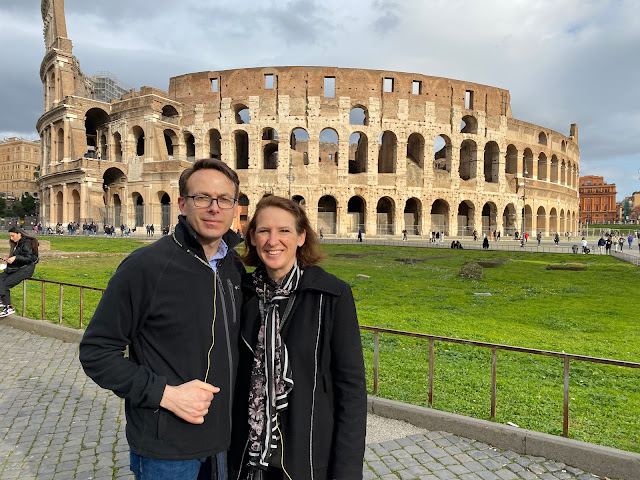 I took my first art history class as a high school senior, and that's when I first realized that I had to go to Italy. My college Italian Renaissance class only deepened my desire. I don't know why it took me three decades to actually get myself there, other than: kids, work, the price tag, other travel opportunities jumping in line. But if COVID taught me anything it's that you shouldn't wait to live the life you want to live. Tomorrow is not guaranteed. 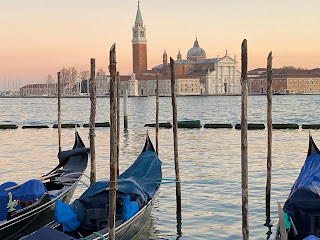 So I found a deal, took the plunge and took the trip to explore Rome, Florence, and Venice, where I felt like I was finally meeting the beloved works of art I'd longed to see! 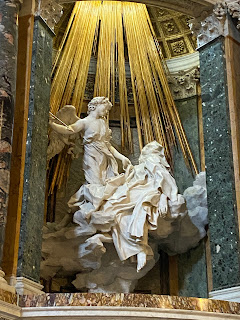 I was surprised to "stumble upon" so many priceless works of art tucked away in churches. In truth, I actively sought out many of them through research, such as Bernini's Ecstacy of St. Teresa. There weren't tour groups of people or fees to pay, just a couple worshippers who didn't seem to mind us standing in front of the alter. Large Titian and Caravaggio oil paintings, as well as famous frescos were scattered throughout the many, many churches we explored. 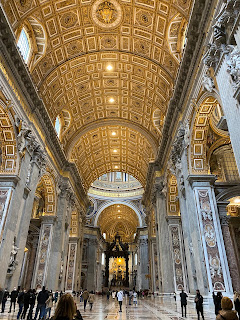 And then there's the buildings themselves. St. Peter's Basicillica has the famous dome by Michelangelo as well as his Pieta. The moving sculpture of Mary holding the dead Christ was behind glass, since someone took a hammer to it years ago, but I was still able to feel close as not many people were there. St. Peter's is the largest church in the world and the dome was built after Brunelleschi's Florence cathedral dome, which was built after the Pantheon dome. Florence as the biggest dome in the world at it's time of construction. Michelangelo was as arrogant as artists come, but even he had the humility to admit that although St. Peter's dome would be bigger, it wouldn't be any nicer than that of Florence. Speaking of Michelangelo, it was such a thrill to see the Sistine Chapel paintings. Here was an example of someone who was clearly "in over his head" as Michelangelo didn't know how to do frescos when he started, and didn't want to do the paintings at all. He had said that painting was for women and Germans, and signed one letter to the pope "Michelangelo, the sculptor, not the painter."  But sometimes life requires us to do the jobs that are less pleasant for the greater good, and I'm grateful for that masterpiece. 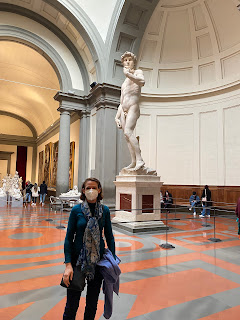 Did you realize that he sculpted David on a piece of marble that had been rejected by all the other artists because it was too tall and too flat? The oversized head looks in-proportion when gazing from below. The oversized hand, holding the stones, represents the powerful hand of God needed to slay a giant. Florence has a reproduction of David in the Piazza della Signoria, where the original once was before being moved to the Academia Gallery. Strangely enough, the museum houses a reproduction of Rape of the Sabine Woman, but the original is at the Piazza della Signoria in the Loggia dei Lanzi. 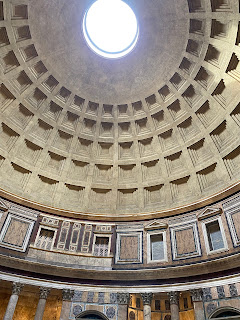 The Pantheon is one place that really exceeded my already high expectations. To see something so ancient brought on so many questions. How did did they make the mold and pour the concrete and get it into place? How did the get the measurements so exact and blend a perfect sphere and cylinder to work with the light of the equinox? The giant, glass-less, sky light has let in the rain as well as sunlight for the past 20 centuries but the marble floor is slightly concave with a built in drainage system. In Rome the Christians were being killed by Pagans one century and killing Pagans the next century. The temple to the gods was repurposed as a Christian church, and that turn over saved the building. Other buildings were being recycled stone by stone. There could very well be stones in St. Peter's that were once part of a much larger Coliseum. 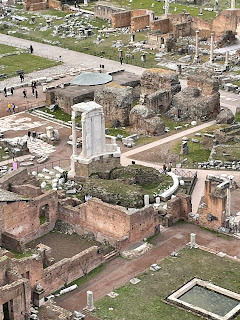 The Roman Forum and Palentine Hill were also really interesting to me. Rome is like a lasagna with layers of city built on on top of one another. The forum contains the  complex of the Vestal Virgins, which was the beautiful home for  six to ten-year-old daughters of senators who were selected to perform rites of the vestal cult. Their job was to keep the eternal Vesta flame burning around the clock until they were released from their duties at the age of 30. There were lots of perks for keeping the goddess Vespa happy and city safe, such as a beautiful home, high social status and special seating at the Coliseum, but there were also draw backs. If you let the sacred Vesta flame go out, you were buried alive. If anyone accused you of no longer being a virgin, you were buried alive. 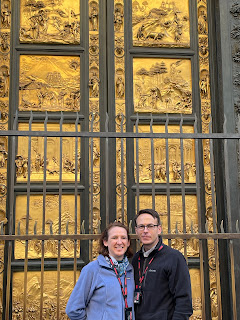 COVID. I naively thought, six months ago, when I booked the trip, that we'd be pretty much back to normal, but thanks to the omicron variant, Italy was a red spot on the map, and you couldn't travel without negative Covid test results immediately before traveling to and from the country. Masks were worn everywhere inside and out (except for the 2 or 3 seconds it took to pose for a picture, or the 10 minutes it takes to eat a gelato). You couldn't go into a restaurant, store or museum without presenting your vaccination card to show that the most recent dose had to be before 4 to 6 months (depending on the person's interpretation.) The plus side is that there were no crowds, so we didn't have to deal with lines and could get up close and personal with gems like Ghiberti's Gates of Paradise. He won the commission to create these doors at age 21, and it took him 21 years to complete them. They are examples of Renaissance innovations to convey space through linear and atmospheric perspective. 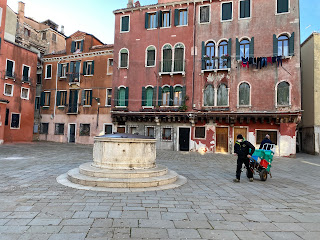 Venice was built by refugees fleeing the Barbarians after the fall of the Roman Empire in 470. The buildings were made of brick on giant pylons of logs toped with lime stone. The wood doesn't rot over time, because the mud keeps out the oxygen and the sea salt crystalizes the logs into petrified wood, essentially. Stone buildings would have been so heavy they would have sunk. The main part of Venice consists of four square miles of little islands in a 200 mile lagoon. There are 140 churches, 326 bridges, and 3,000 streets. Each island has a neighborhood well. Rain water ran through from holes in square, and ran through the sand (a cleansing process) to the lowest point. 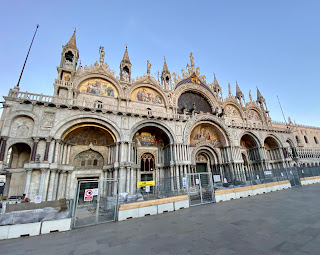 Saint George was the patron saint of Venice until the Venetians decided they wanted to compete with Saint Peter in Rome. They went to Egypt and stole the body of Mark from Alexandra. In order to get passed the Muslim officials working "customs," they covered body with pork. They didn't seem ashamed about breaking the 7th commandment. On the contrary; they were proud enough with their clever theft that they recorded it in gold mosaic on the front of St. Mark's Cathedral that hold's the apostles remains today. 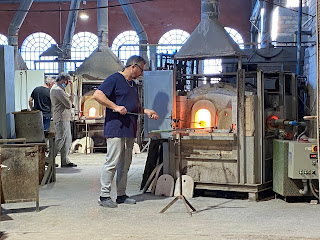 Venice is famous for its glass. It was so fun to take a boat to the island of Morano to see glass blowing demos as well as galleries full of pricey and high quality, hand blown chandeliers and wine glasses.
If I had to do it again, I would have spent more time in the Vatican museum, which is really a series of 12 museums and house more art than the Metropolitan museum of art. In fact, it has more than any art than other collection except for one in China. I went with a tour, which allowed me to learn lots of juicy tidbits like the rumor of there being boxes and boxes of marble penises in Vatican storage as a certain pope got tired of people coming to a holy place and seeing naked pagan sculptures, went on a fig leaf crusade. Most of the fig-leaves are made of plaster and can be removed. I also got to stand on the courtyard cobblestone, knowing that below me was buried a beloved elephant that had once been gifted to the pope. Being on a tour, however meant, that I didn't get to see pieces that were a priority for me, including Raphael's School of Athens and the sculpture Laocoön and His Sons.  Guess I'll have to make another trip. 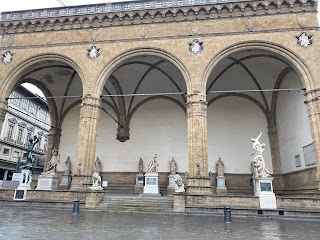 Serious art teachers care about art enough to want to see it in person. I believe that going to museums and galleries is as important as a professional learning experience for an art teacher as sitting in meetings about the new lesson plan template. In my 9 years of teaching at public schools, zero minutes of countless professional learning hours have been dedicated to teaching me how to teach art. This means that it is up to me, as a life long learner, to stay excited about the art of the world, so that one day, one of my students will say they finally made it to Italy to see the masterpieces they first learned about from me.
Posted by Kristen Applebee at 11:52 AM No comments: 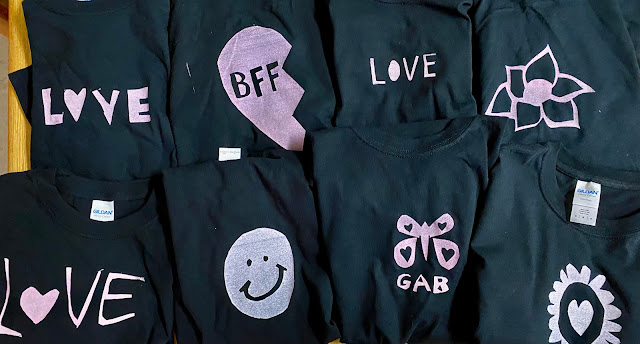 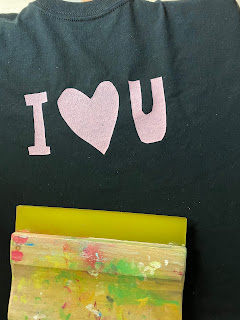 Happy Valentine's week! My art students celebrated the holiday by screen printing one-of-a-kind t-shirts. They each were given the task of drawing a simple design in Wiki Stix or marker, and then cut it out, or I cut it out for them depending on their level of vision. We placed the paper stencil on a back t-shirt and screen printed the design. With all the personal attention and the time required to clean out and swap out between our two screens, we could do up to four students in a period. Thank heavens for small classes! 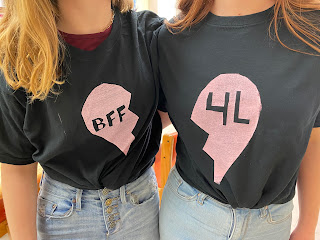 It's fun to give a task and see students generate ideas and bring them to fruition in the matter of an hour. Some students really got into the idea and made gifts for each other or matching friendship shirts. Valentine's Day isn't just for lovers, it's for everyone to get to celebrate love and happy, healthy relationships between students, colleagues, friends, and family.
Posted by Kristen Applebee at 9:13 AM No comments: 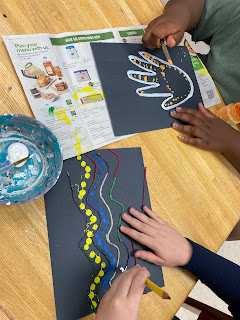 While my older art students were studying Yayoi Kusama, Princess of Polka Dots, younger students were learning how dots and pattern have been used in traditional cultures in Australia. I gave a simple lesson that touches on the wildlife, geography, and art of Australia, then we discussed the symbols used in the art, including arrows, circles, hands, wavy river lines. Animal motifs are also very important. Some students chose to do turtles or snakes, others traced their hands, and others used more abstracted symbols. They dipped the backs of pencils or paint brushes into latex paint, which makes tactile dots when it dries. That, along with high value contrast is the perfect combination for my low vision students.  You can see from the picture, that some students, with no vision used Wiki Stix to use as guides as they painted their pieces.

Posted by Kristen Applebee at 8:59 AM No comments: