How to Make an Etching

Intaglio is a type of printmaking in which the ink goes under the surface of a matrix, such as a piece of copper or zinc. This is unlike a relief print where the ink sits on top of a rubber stamp or wood cut.  I am taking part in an print exchange suite, which means, in January, I created an edition of 30 identical prints. A bunch of other printmakers do the same.
Then we each get one of each other's prints in a lovely suite.

Here is how I made my print.

I took a zinc plate. I beveled the edges (with a file, scraper and burnisher) so that it would be able to run through the press without tearing the felt blankets. Then I covered the plate with a hard ground. This can be painted on or melted on with the use of a hot plate, and then rolled to make the covering even, depending on whether your hard ground came in a liquid or solid. 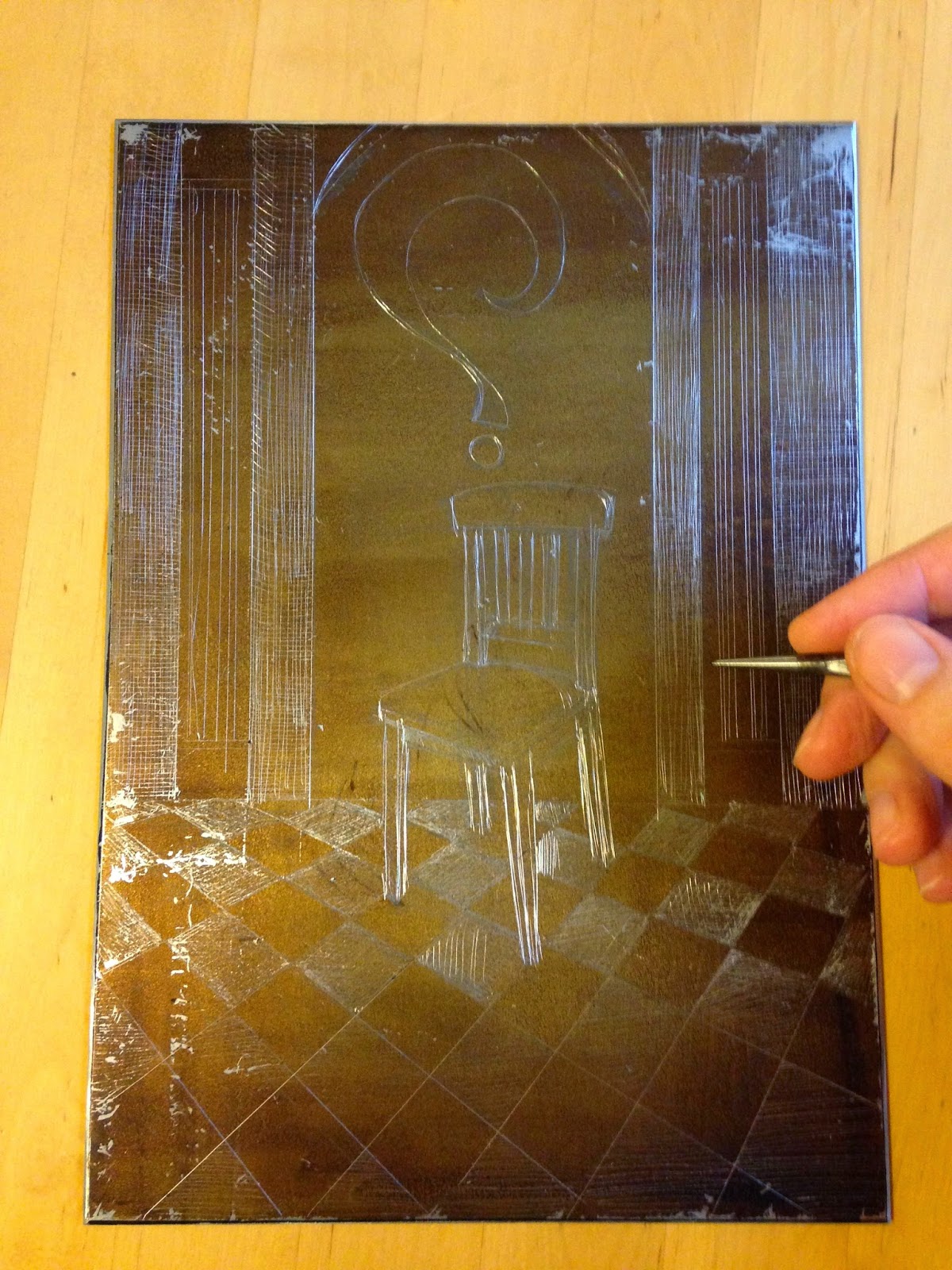 
I drew an image with an etching needle. Each line scratches through the hard ground and exposes the metal plate. The print is always a mirror image of the plate, which means, the question mark had to be drawn backwards on the plate for it look right on the etching. 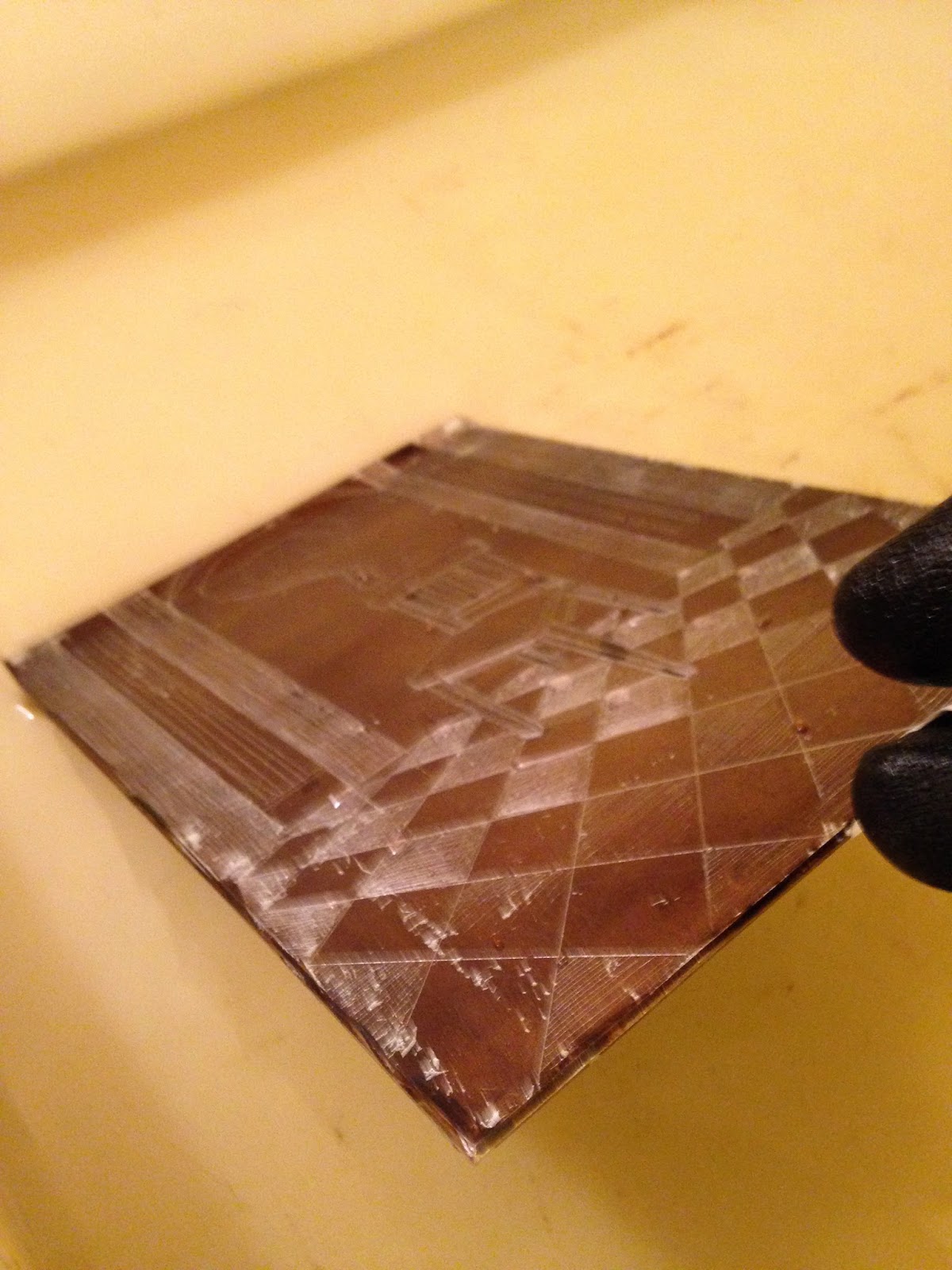 When placed in a bath of nitric acid, the exposed metal will etch. In other words, the lines that were drawn will be eaten away by the acid and create grooves, which will later hold ink. Little bubbles are formed around these lines in the process, which causes uneven etching. You can avoid this by stroking the plate with a feather as it etches, or you can create a little masking tape tail from other the plate, which can be used as a handle to tilt the plate every 15 seconds. Both methods get rid of the bubbles.

Rinsing and drying the plate stops the etching process. 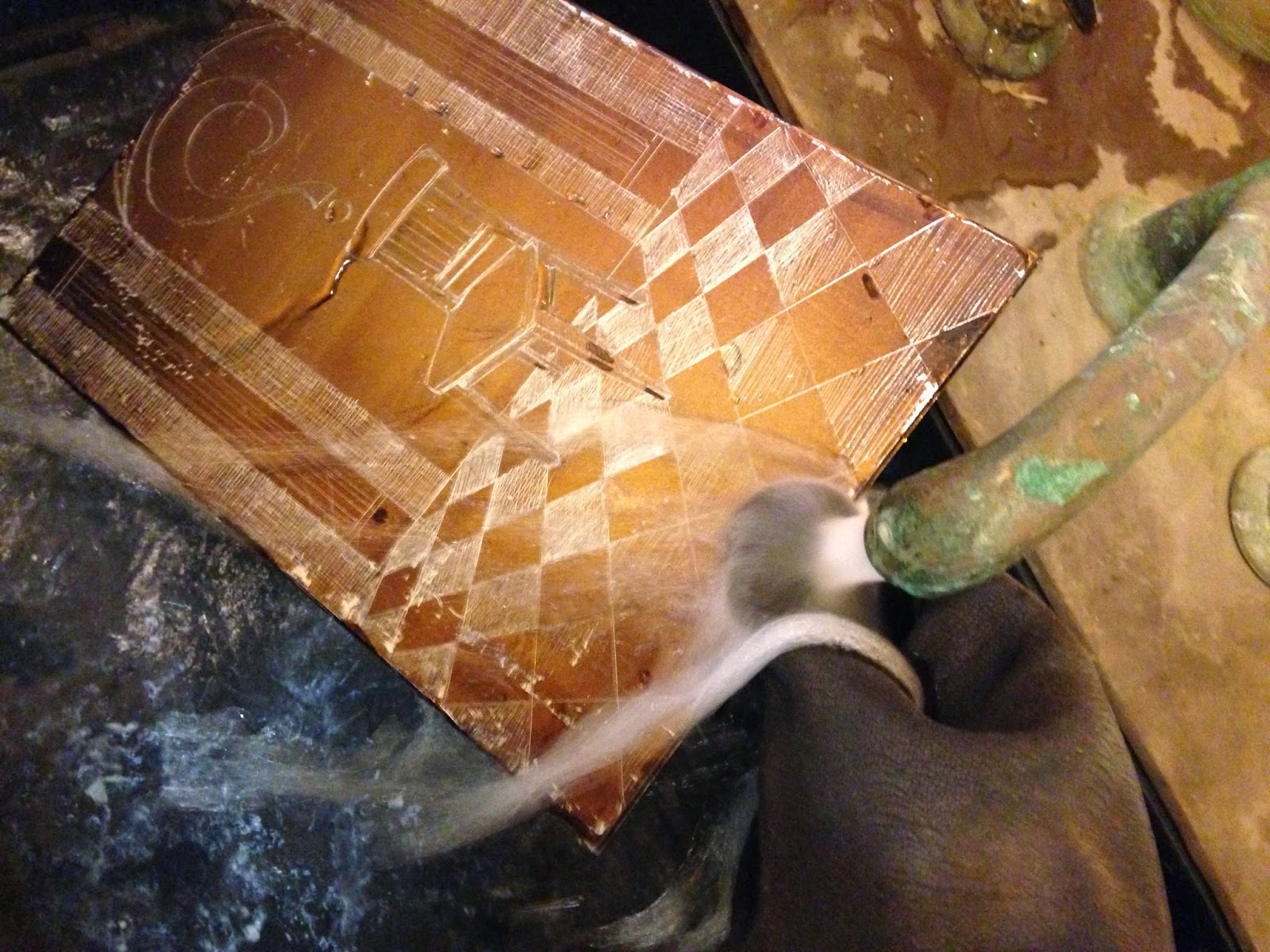 The hard ground can be wiped off using kerosene, and then cleaned with a little dish detergent and water. 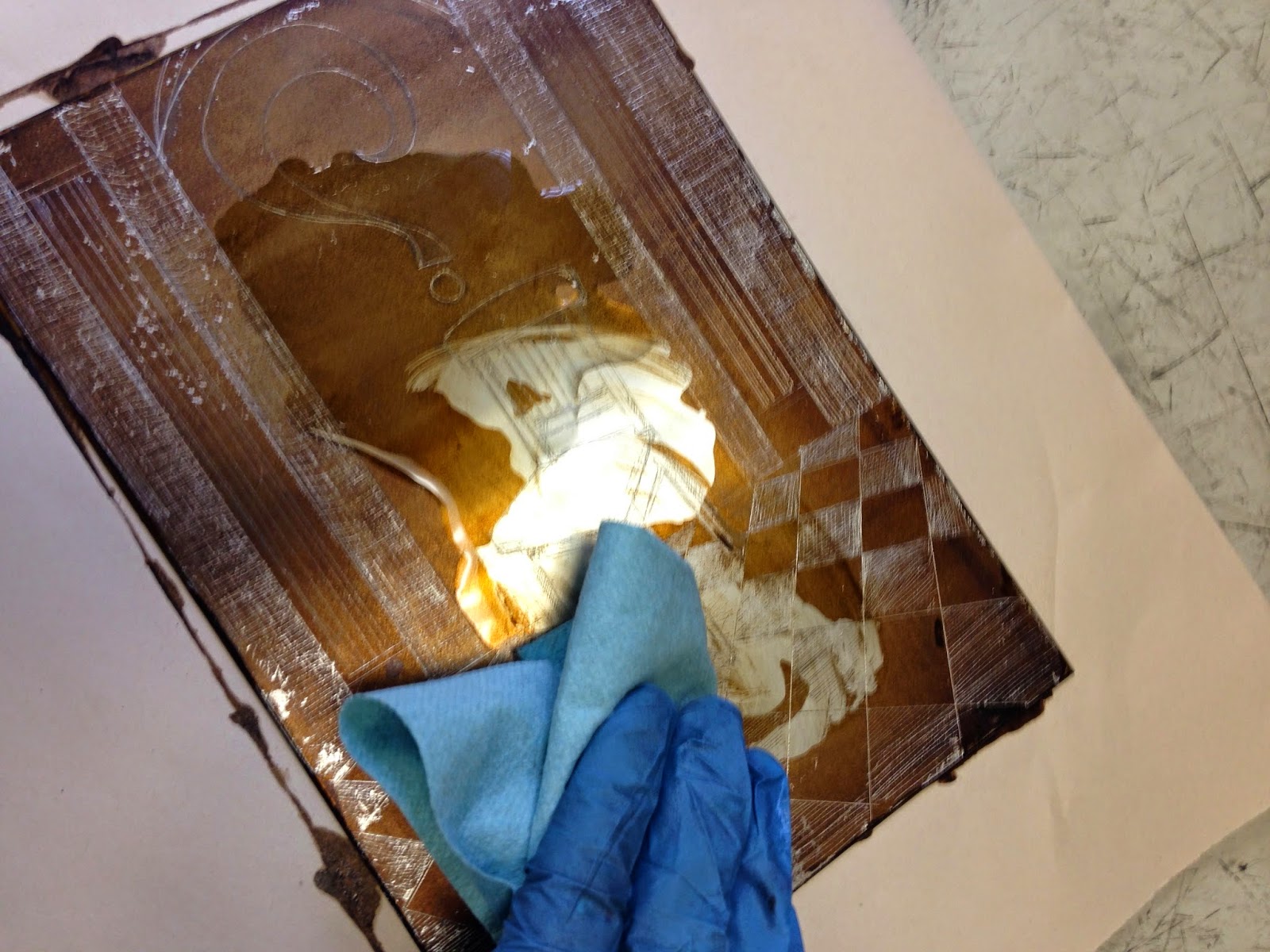 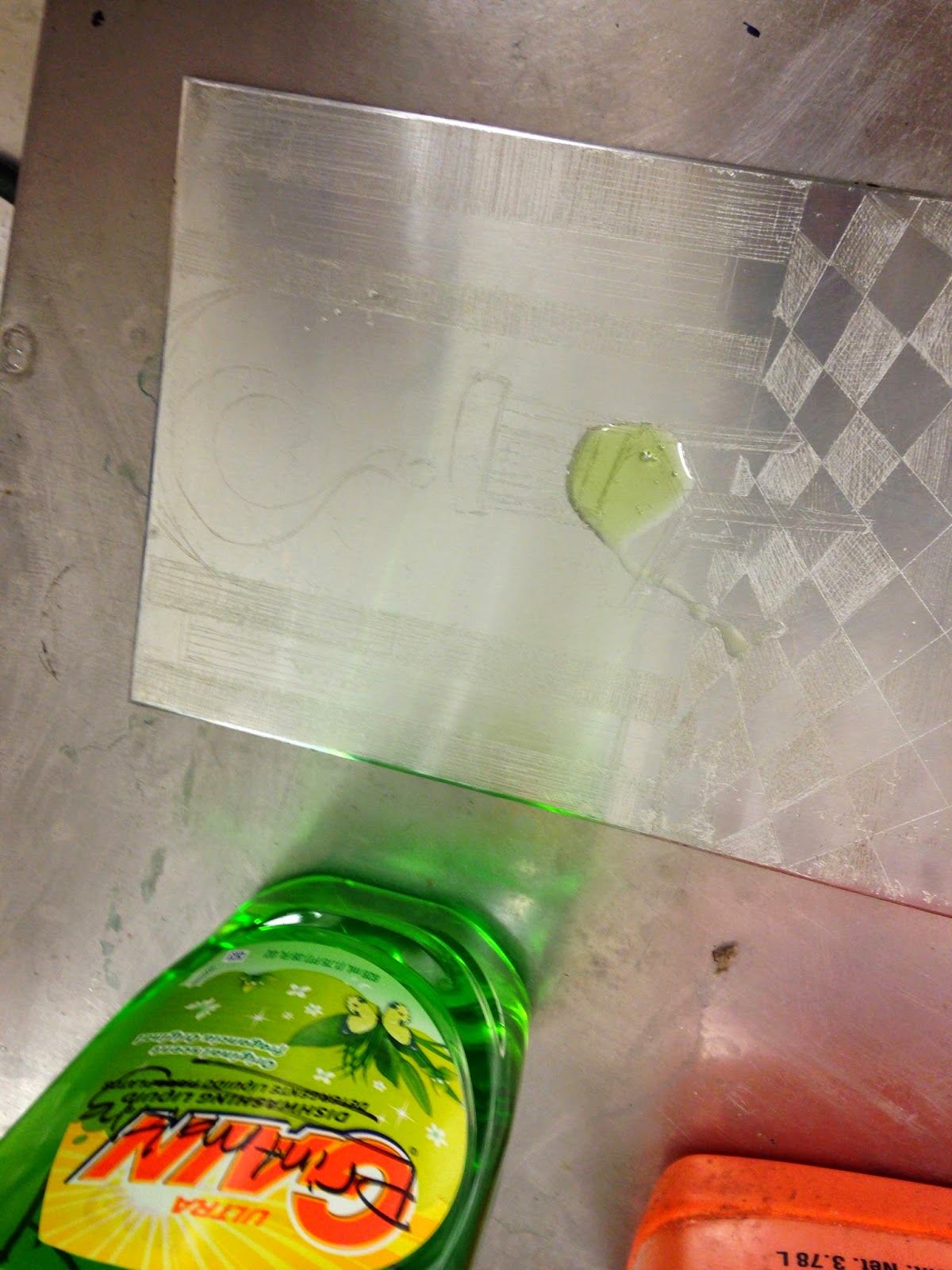 I decided to add a soft ground. This is applied like the hard ground. Rather than draw, I used a feather and pressed it (with the help of the press) into the surface.  All other parts of the plate were blocked out with hard ground, and I etched it again. 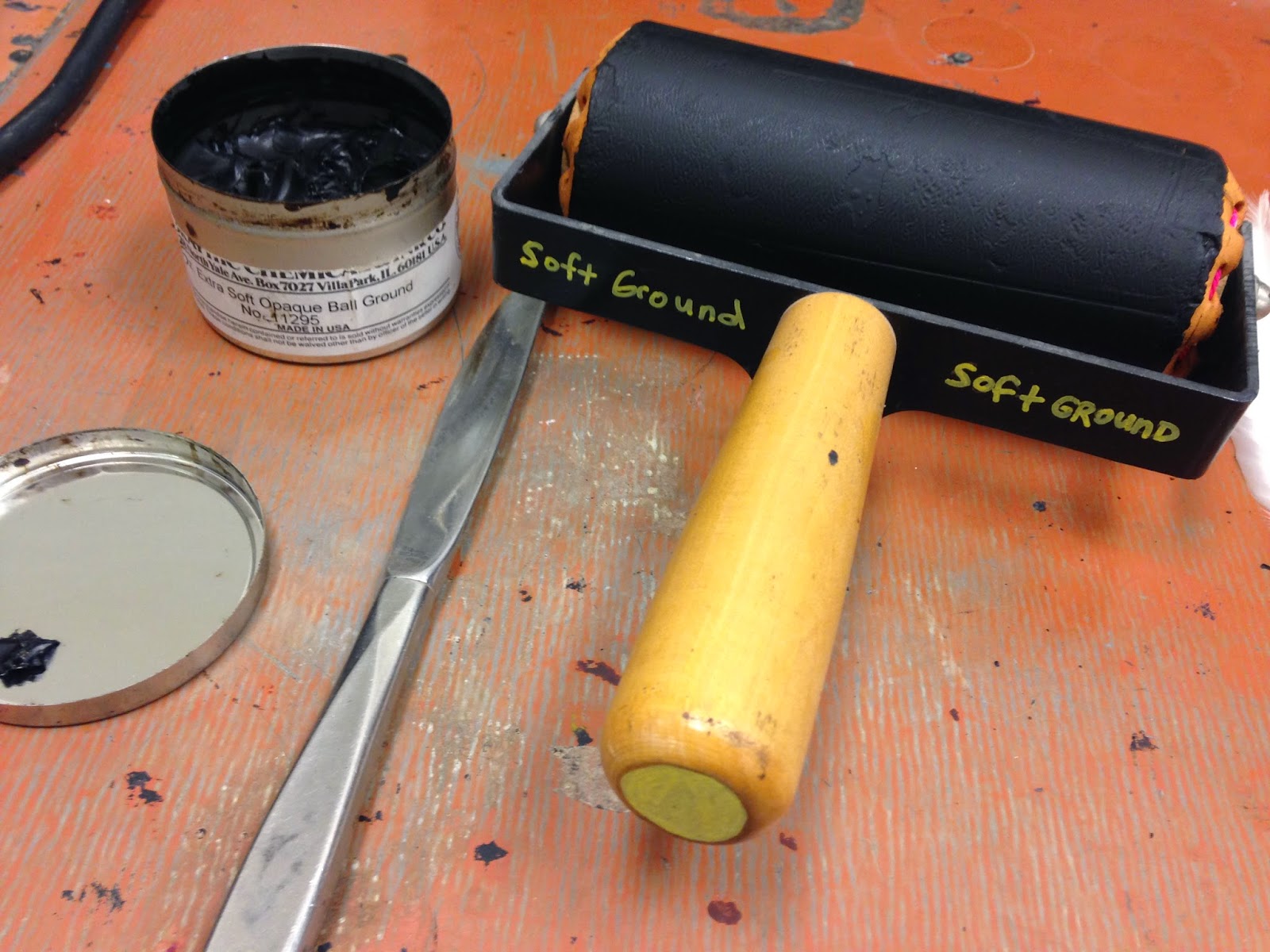 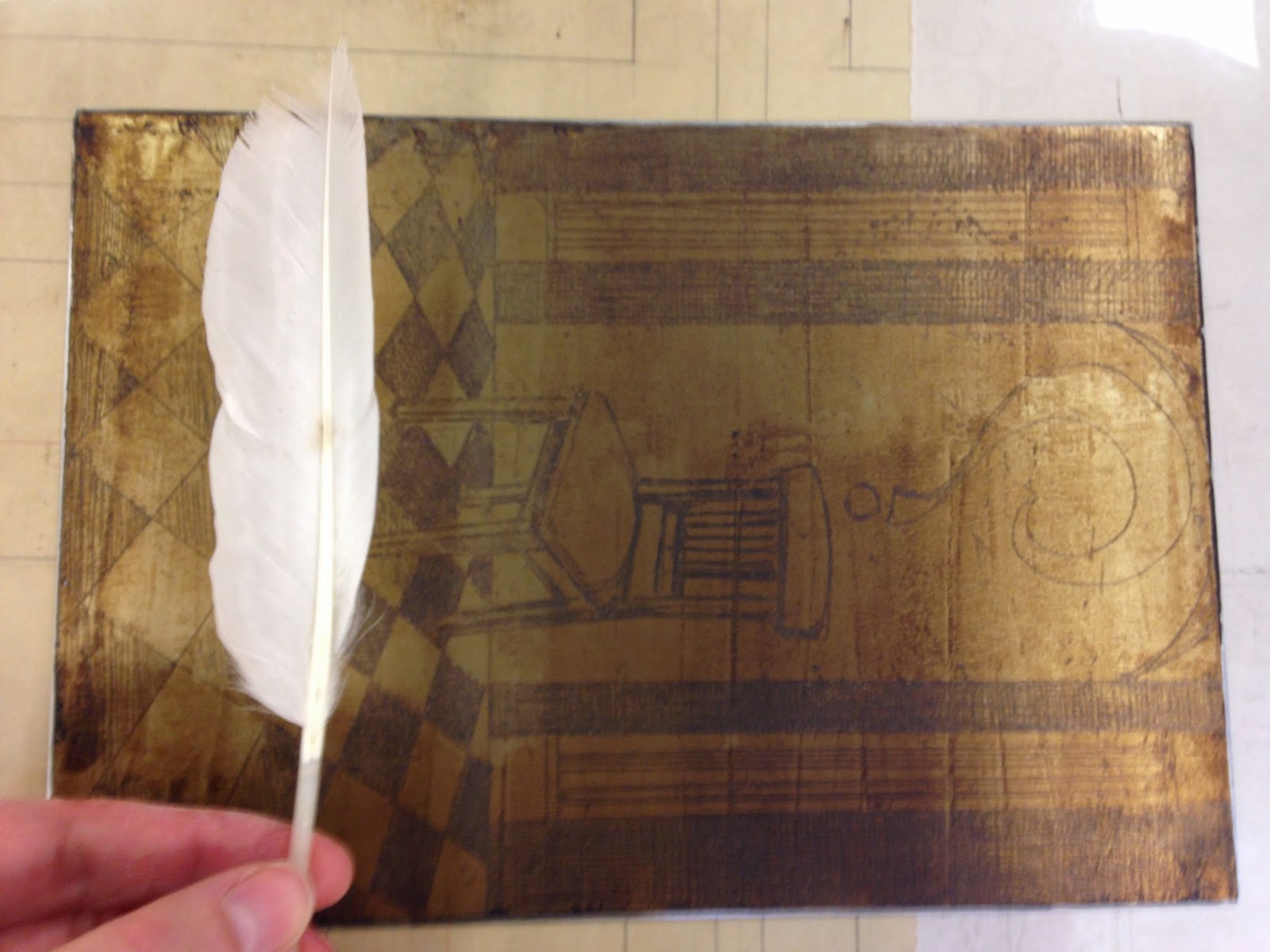 Then I painted with the hard ground all the areas I wanted to be white. I used spray paint to create an even coat of speckles, which is one way to make an aquatint. The acid avoids the paint, but eats in the plate in lots of little tiny areas, which can make value. I pulled the plate from the acid bath every couple minutes and add another layer of hard ground to block out, until only the areas I wanted to be the darkest were exposed. 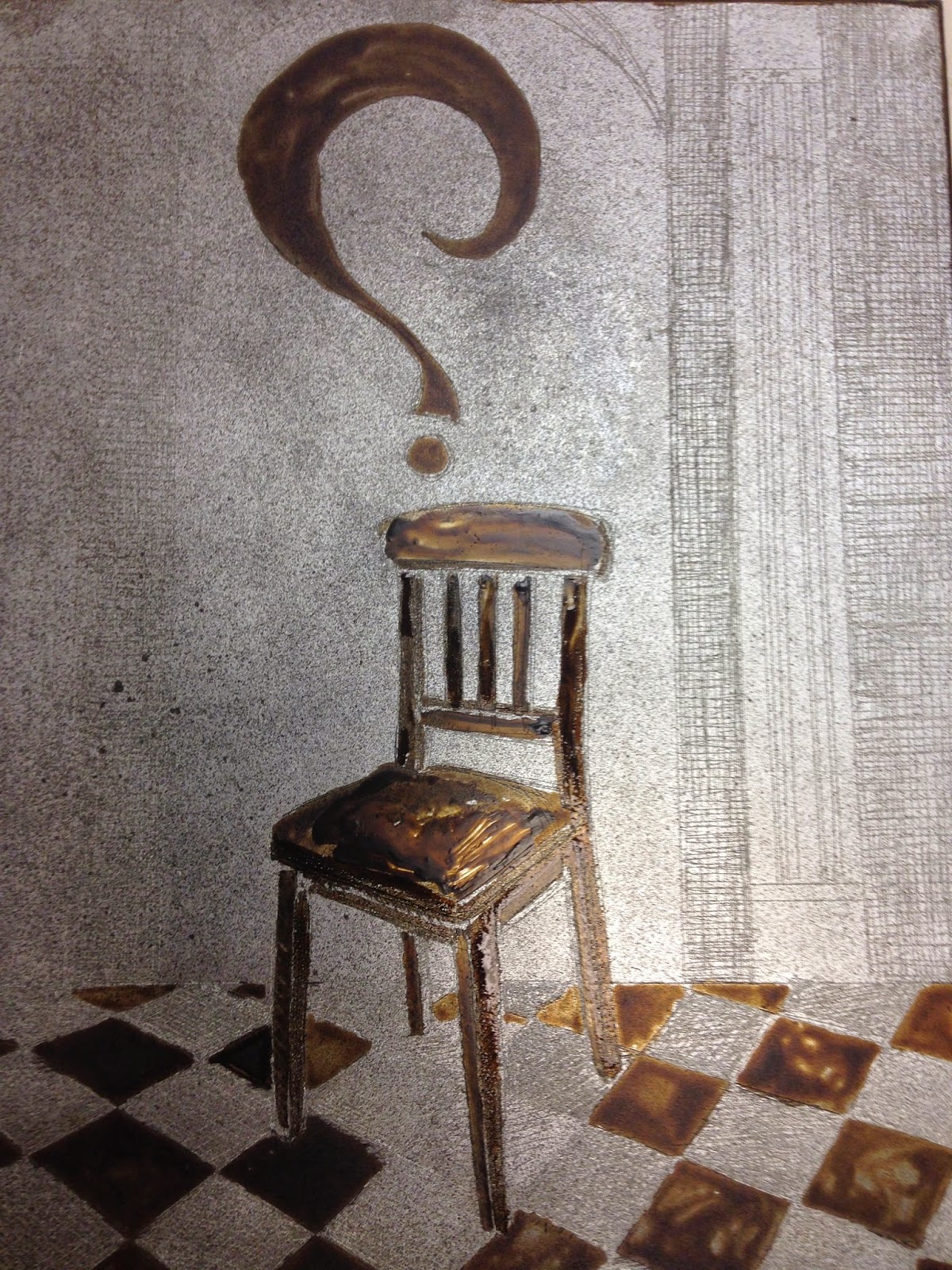 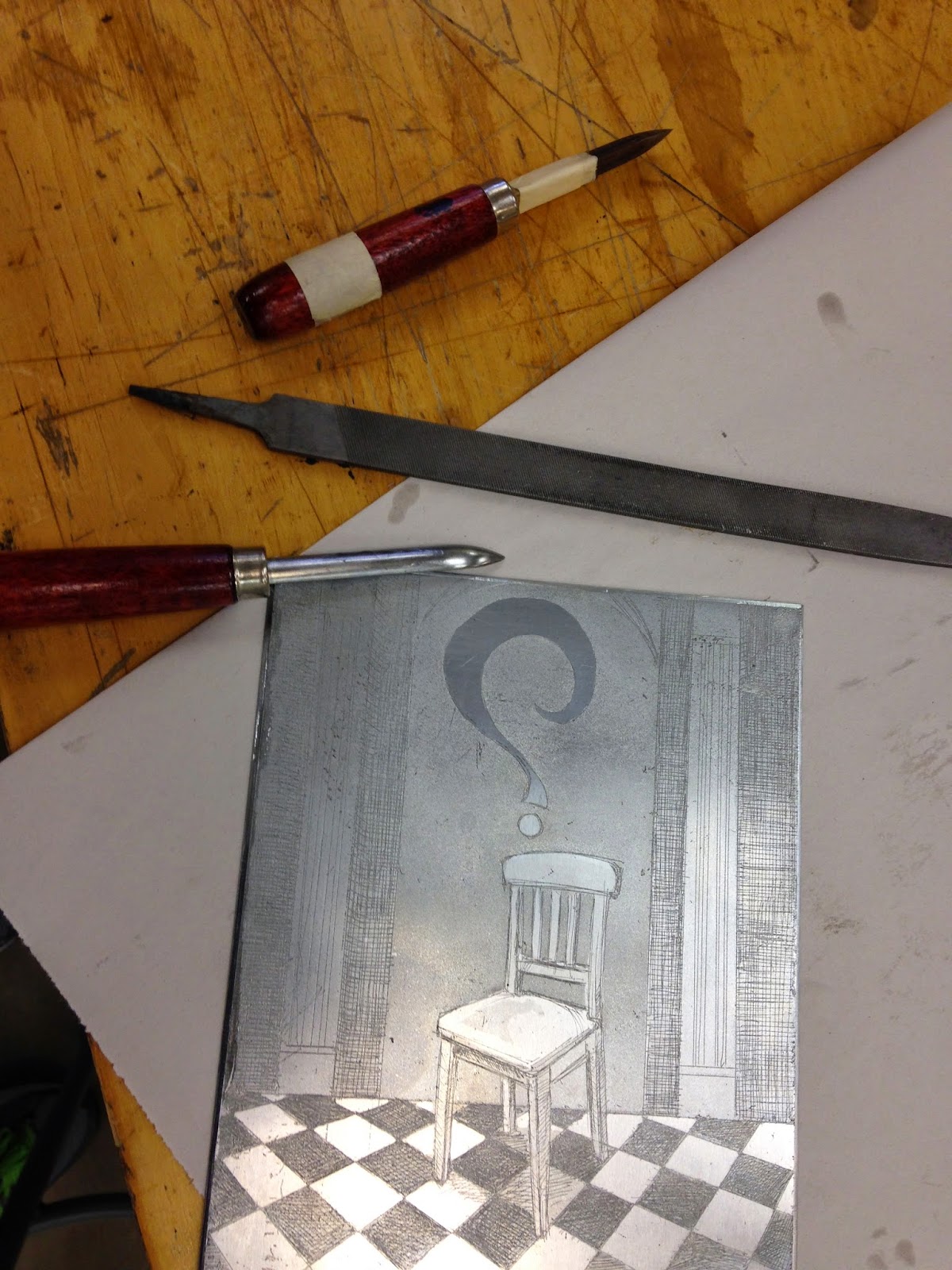 
Once the plate was cleaned, I had to re-bevel the edges with the file, scraper, and burnisher. It's important to get the edges smooth so that they don't hold any ink. 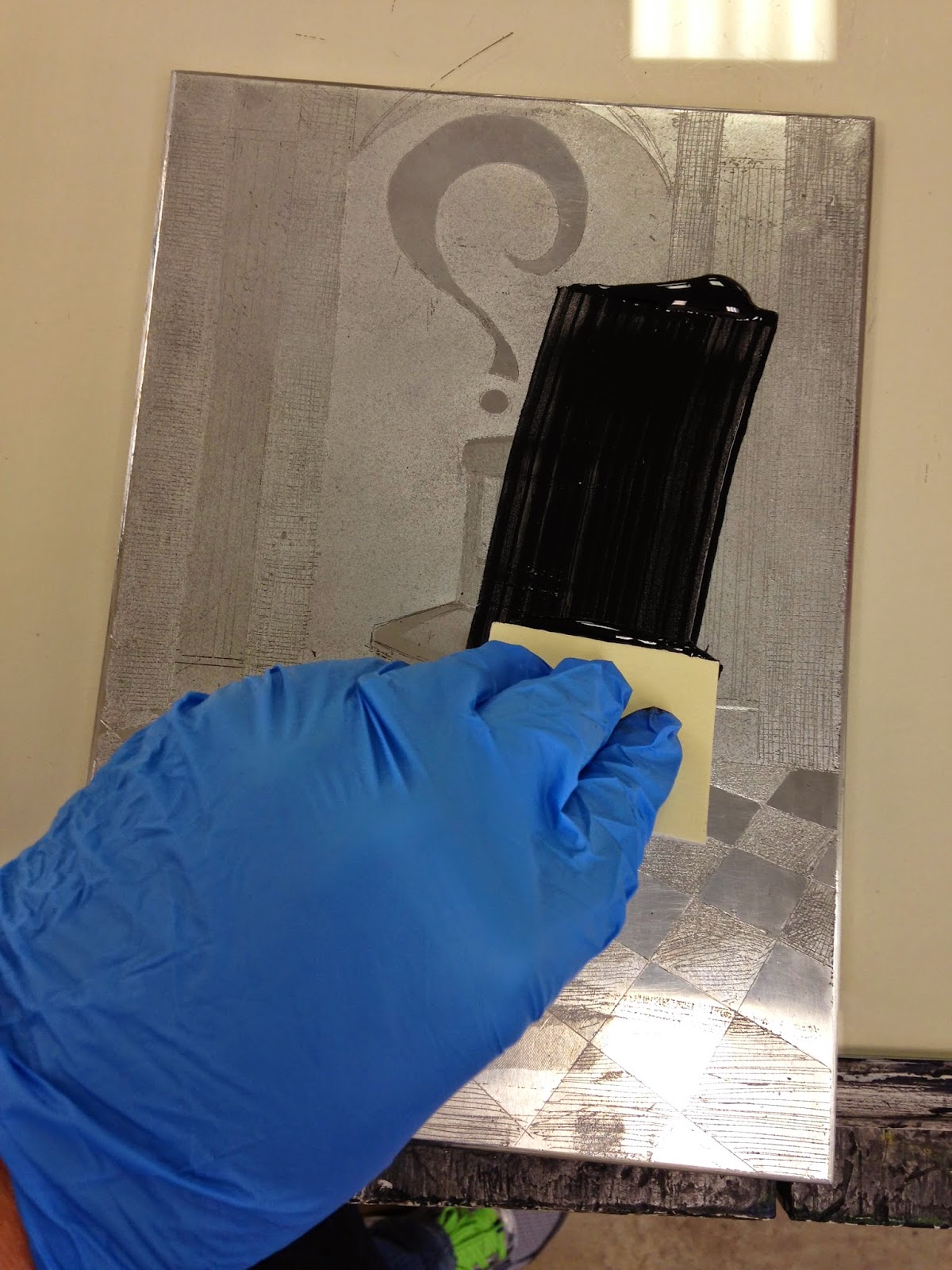 I used small squares of mat board to apply the ink. It is important to coat it thoroughly, by going in lots of directions. Mat is also used to scrape off most of what is on the surface before wiping the plate using tarletan. Some print makers wipe with paper (phone book paper) lightly before hand wiping, gently to help get even surfaces, and light lights. My husband, Dennis inked both his and my plates and I was the "clean hands" person to work with the paper and press. Our courtship began 18 years ago in a print shop, and it has served us well to know how to collaborate and cooperate on projects such as this. 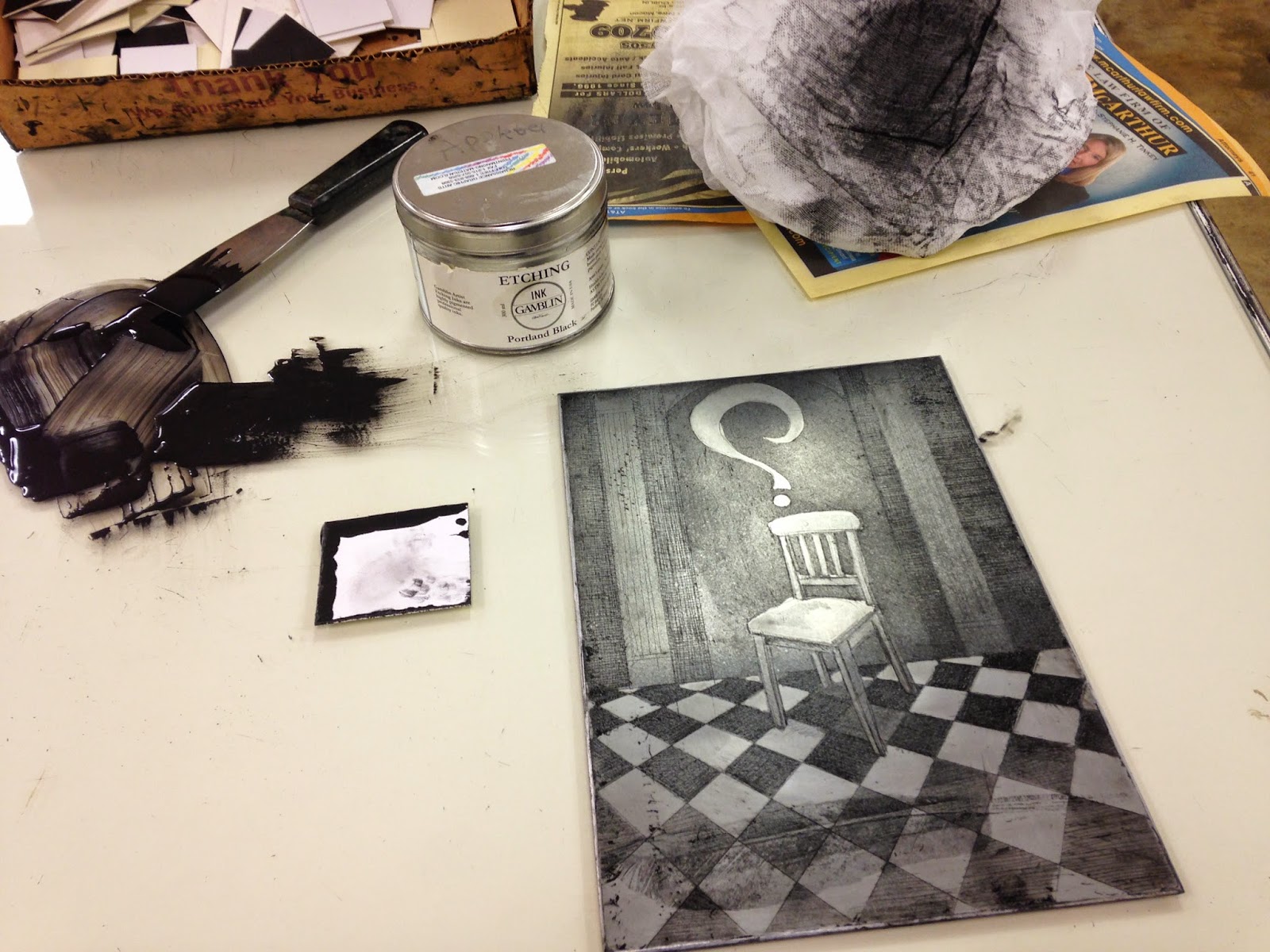 Finally, the inked plate is placed on the printing press.  A damp piece of paper is placed on top of the plate. I soaked and blotted an whole stack of printing paper before placing them in a plastic bag. This is called a damp pack.  I also created a template so I would know where to place my plate and paper in order for it to be centered and squared each time. 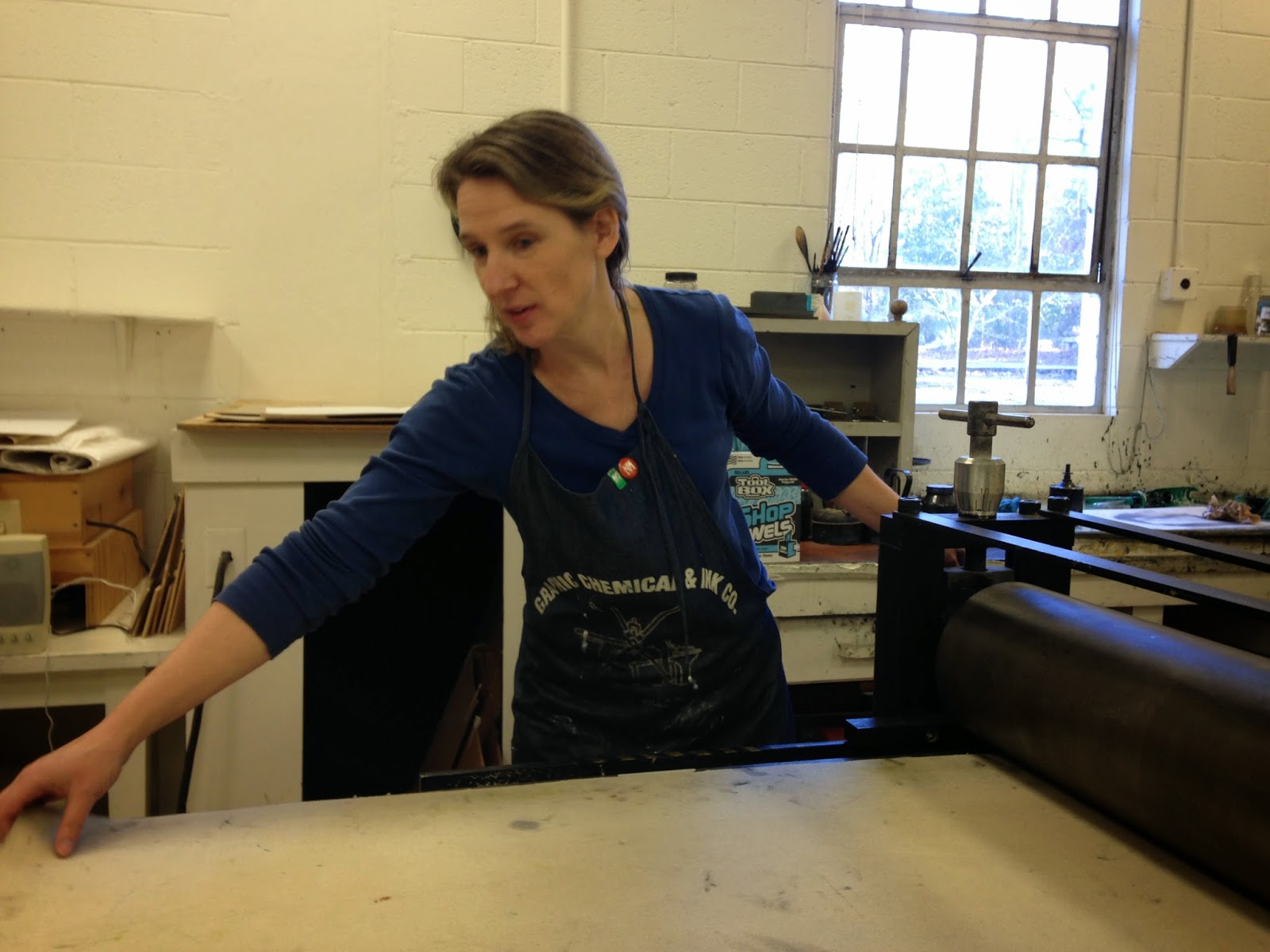 After running it through the press, I "pulled the print."  Really, I had to print a couple throughout the process to know how it looked and where it needed to be etched again. I'm willing to post an incredibly unflattering picture of myself just so you can see the press and the felt blankets that I'm pulling back to get to the print. Hey, I'm not proud.


After an 8 hour day, my poor hubby's back was killing him. 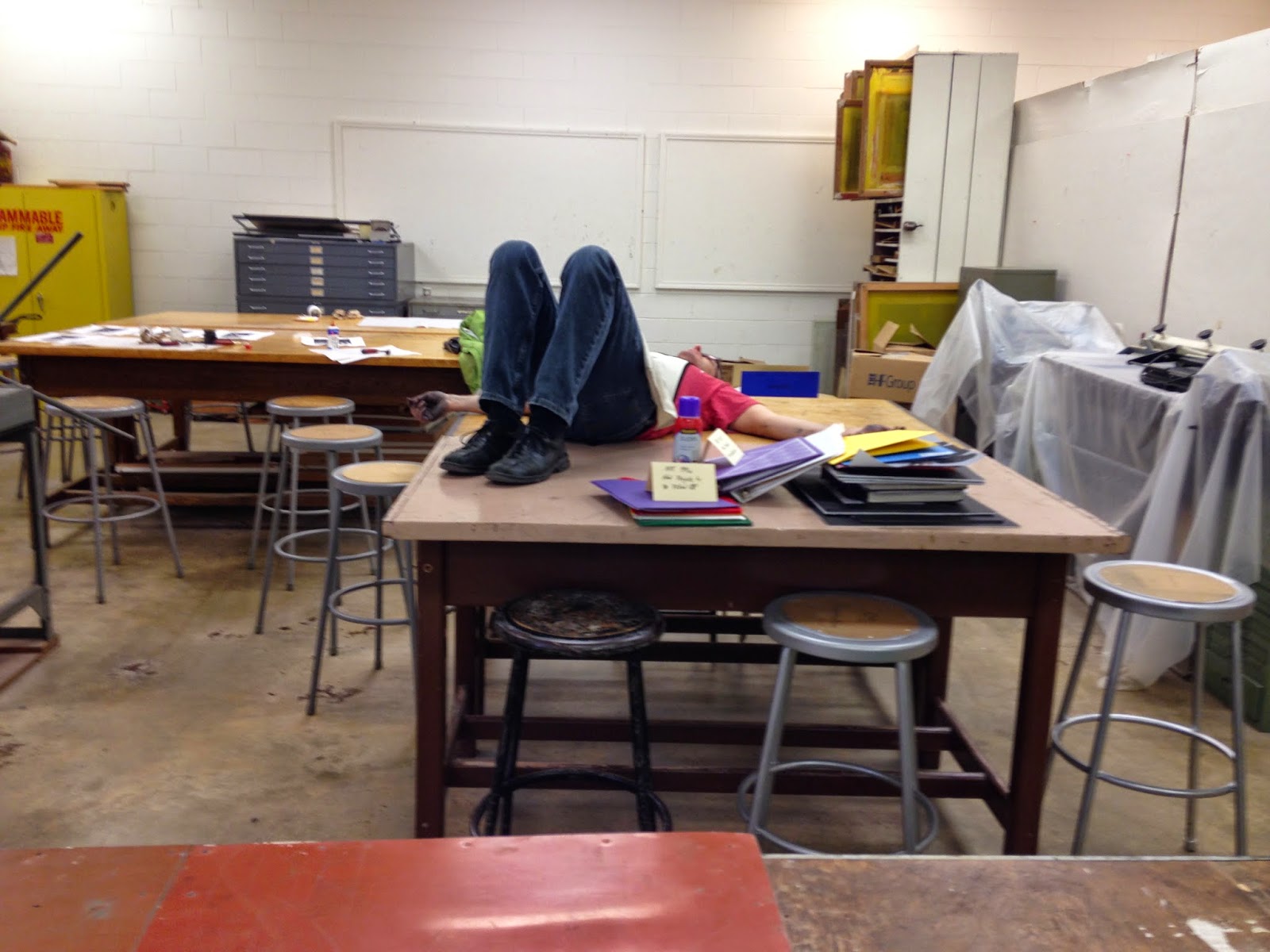 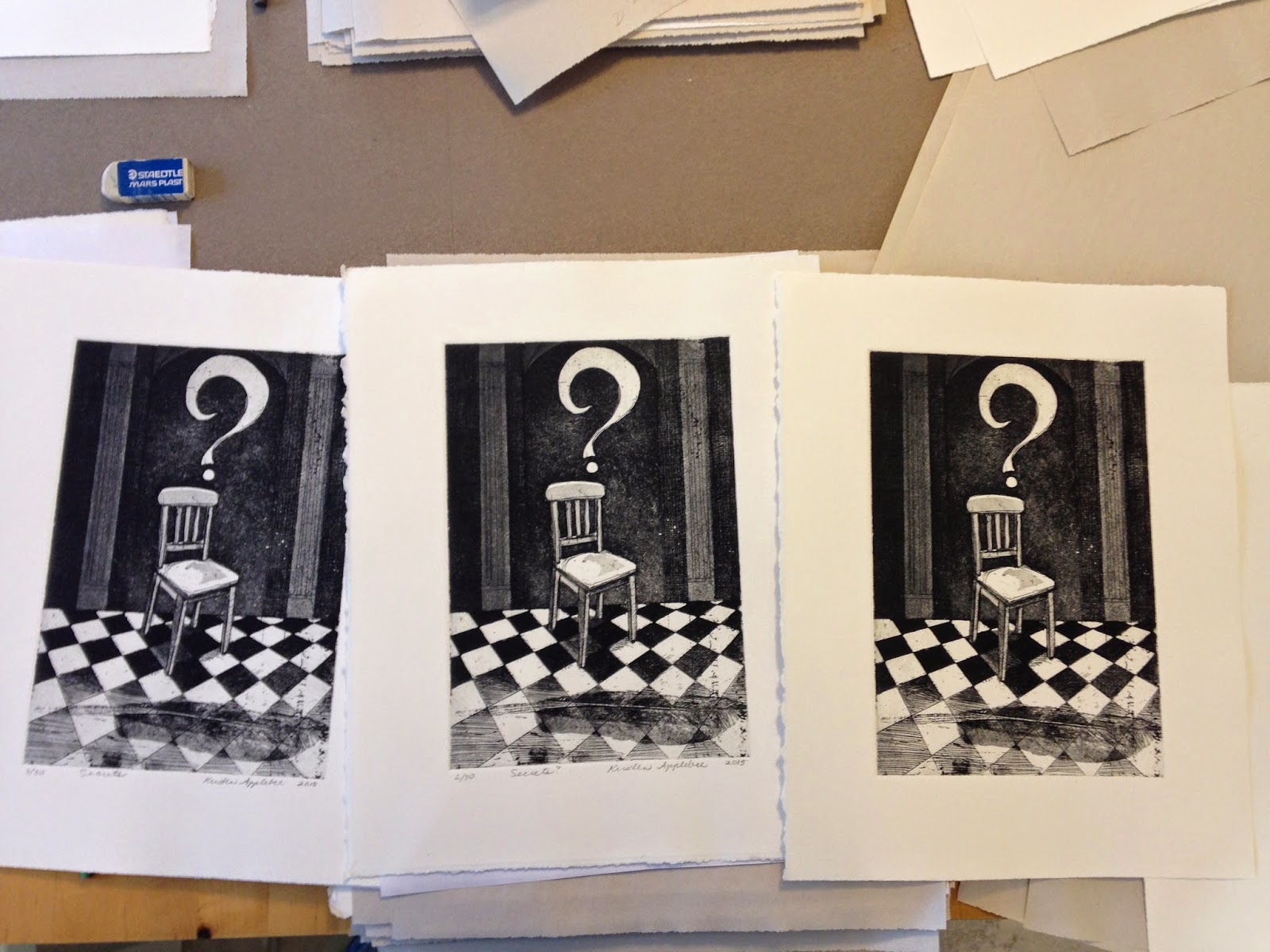 Posted by Kristen Applebee at 6:26 AM No comments:

Last fall when my art lessons all about leaf projects (see the blog with leaf collages, prints, and ornaments), my older students made leaf bowls. They each made a large slab of clay using the slab roller. Then they pressed the vein side of leaves into the clay and cut out around the edges. It was as easy as making sugar cookies. There were a variety of styrofoam, plastic and stainless steel bowls to use as a mold. Students each chose a bowl, turned it upside down pressed their clay leaves together, texture side out around the the bowl. They added either individual feet or a donut shape of clay for one foot. It ended up being a nice way to marry function and aesthetics in project. 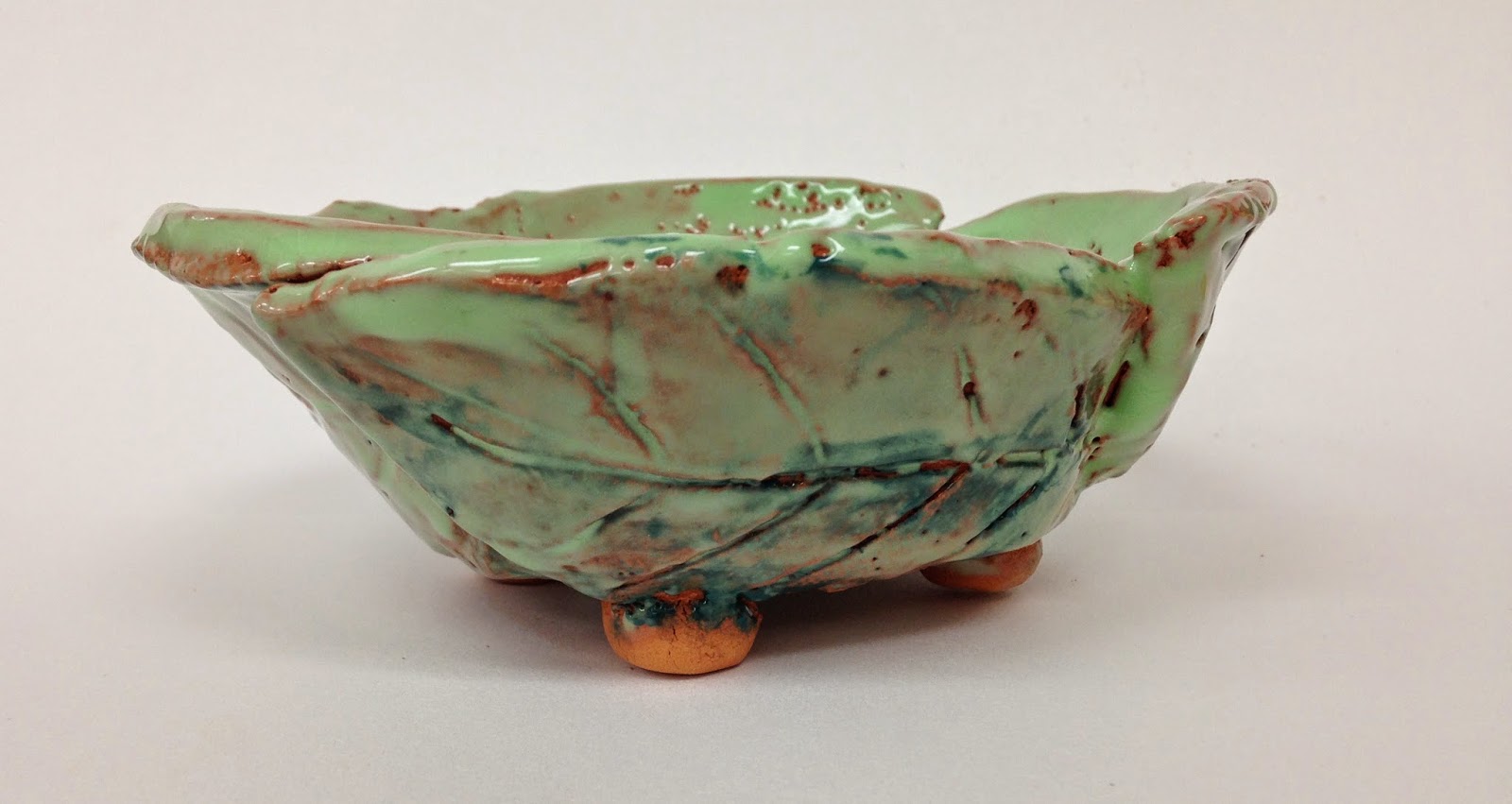 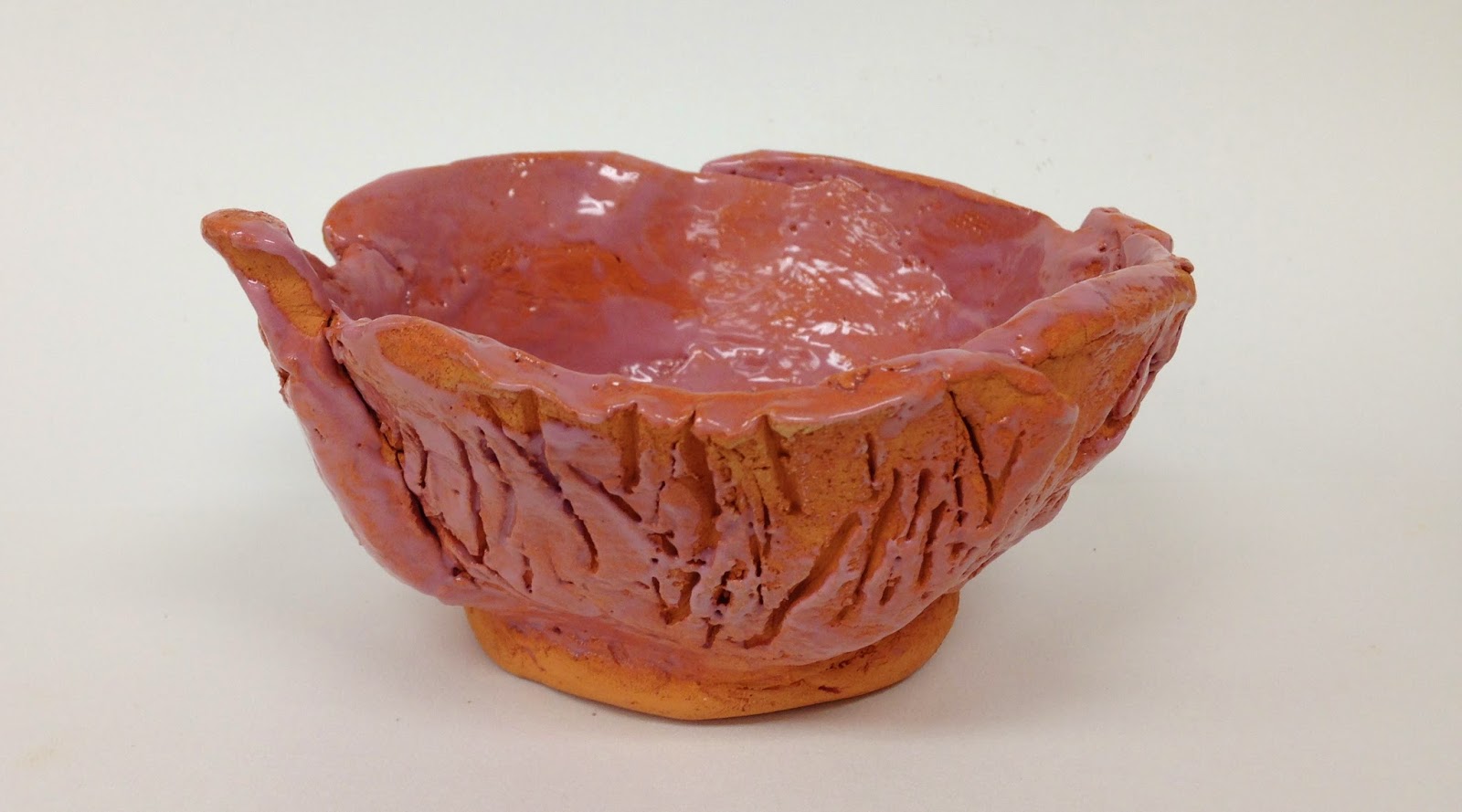 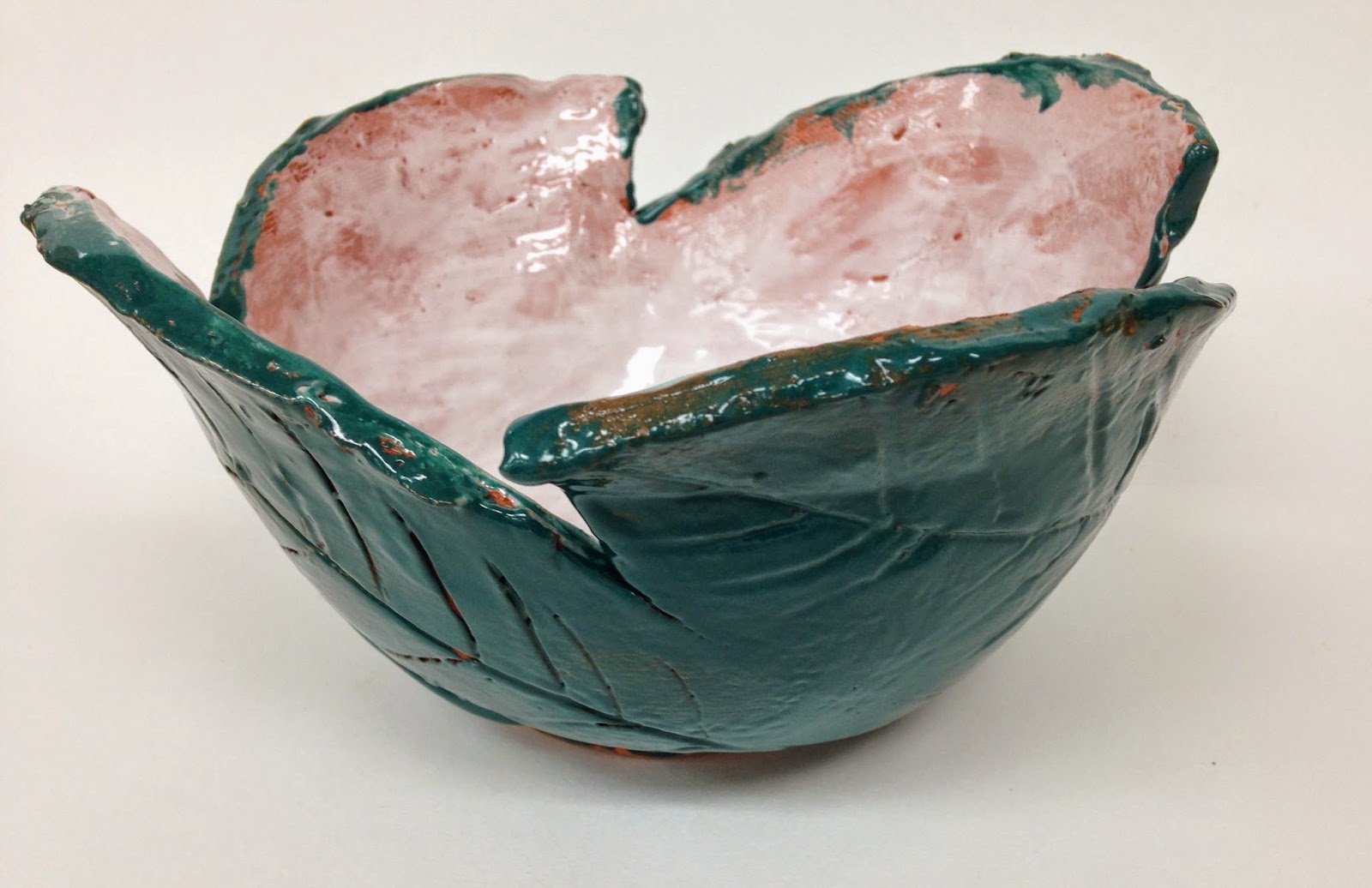 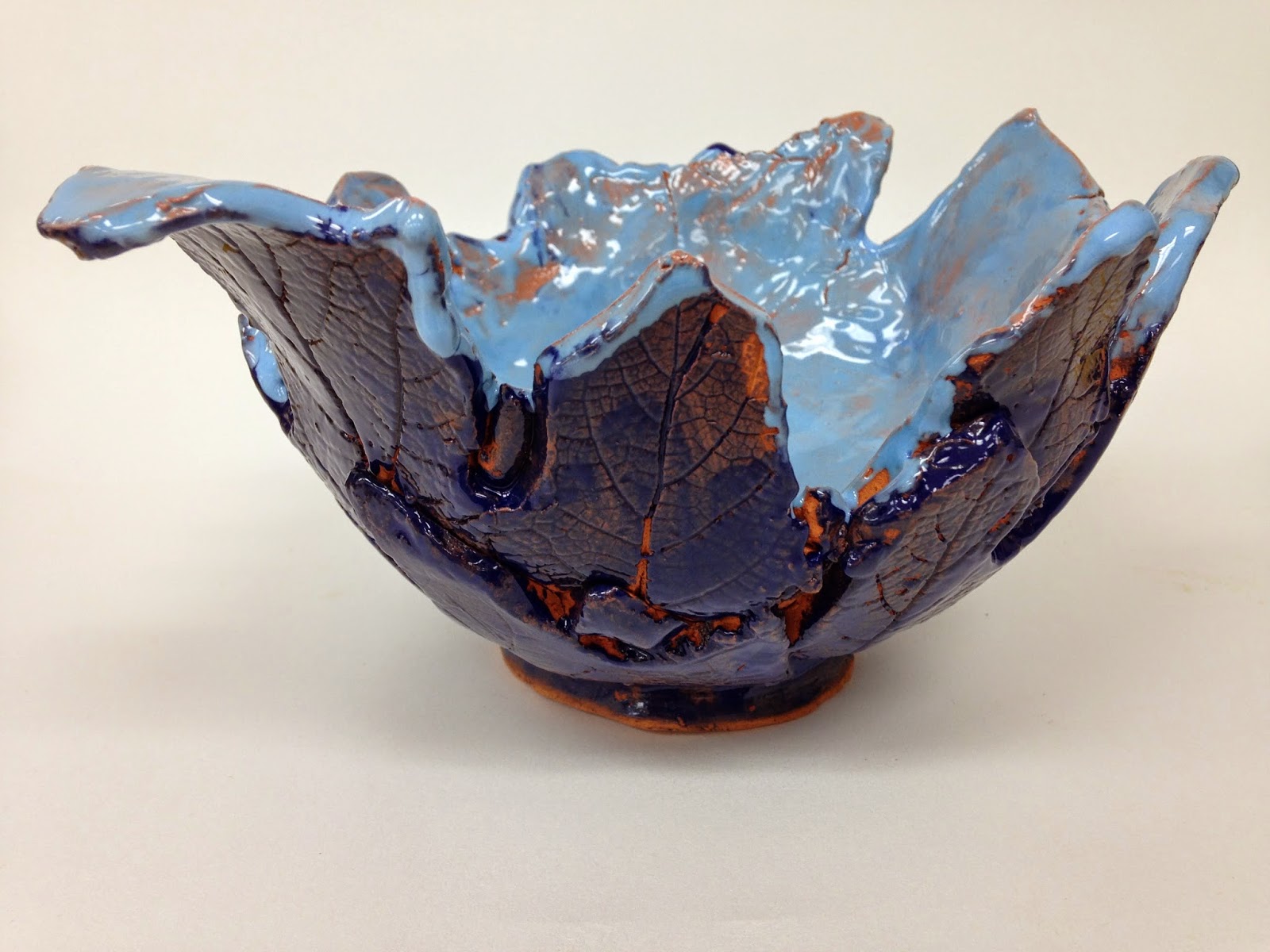 Posted by Kristen Applebee at 10:26 AM No comments: