As an art teacher, it's my job to teach the basic techniques of ceramics, such as making slabs, pinch pots, coil pots, and using the potter's wheel.  But there's so much that can be done to learn each of those techniques. It has been four or five years since we made slab boxes to learn slip and score method of joining two pieces of clay, and about that long since we've made animals from pinch pots. And so this was our year to do those projects, and it was great fun. 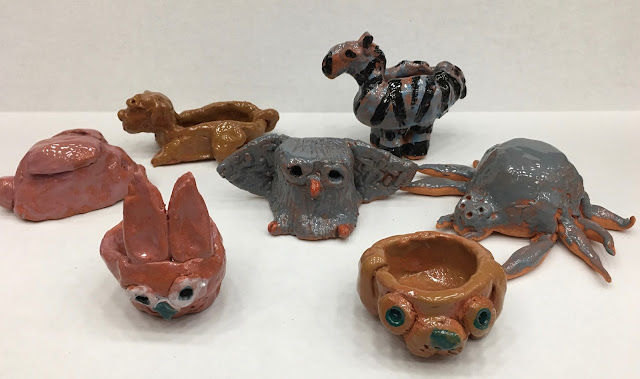 Posted by Kristen Applebee at 7:23 AM No comments:

Discarded Books to Works of Art 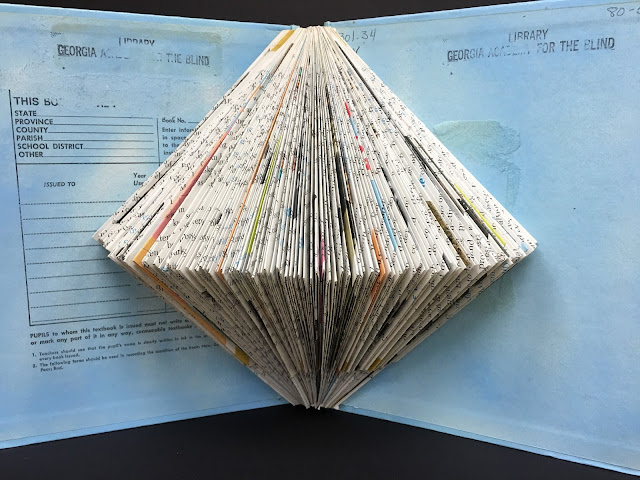 Old books can become new sculptures with a few folds and maybe some glue and paint. The book above just had the top and bottom corners of each page folded in, while the book below had a group of pages with the  bottom corners turned up followed by a section of pages in which the top corners were turned down. 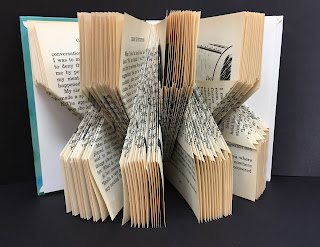 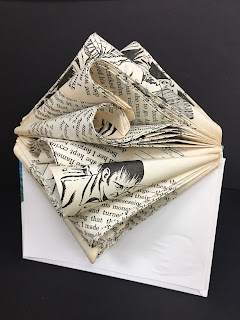 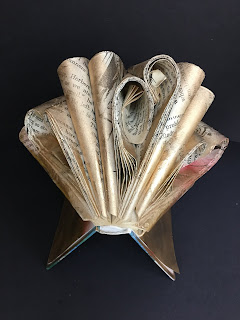 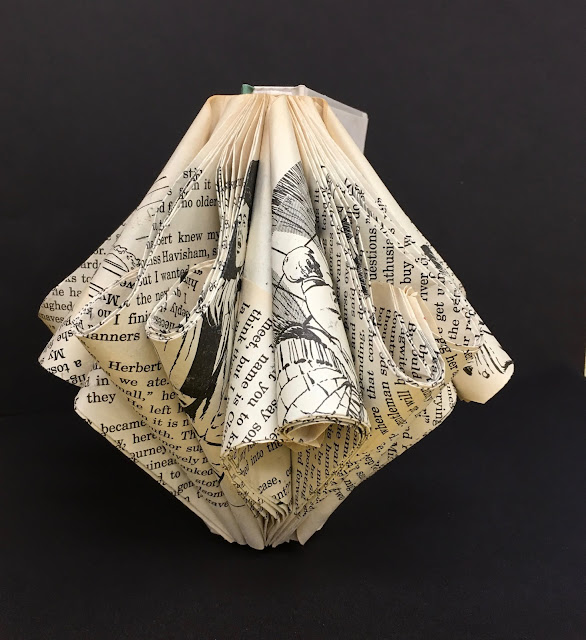 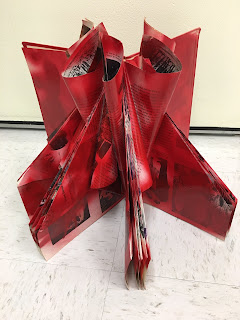 Here is a similar process of folds and rolls, followed by a touch of red spray paint. 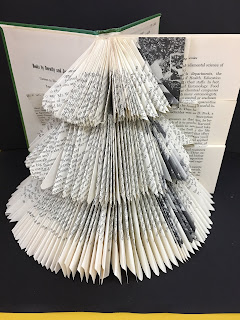 This Christmas tree idea that was found online is the only one in which the pages were cut before they were folded. Although some students cut out pages and painted ink silhouettes with them.

And one student used discarded maps to make paper flowers.

In order to create a vintage feel or a piece of art that communicates layers of meaning, it might be wise to look beyond a plain white sheet of paper into discarded reading materials. 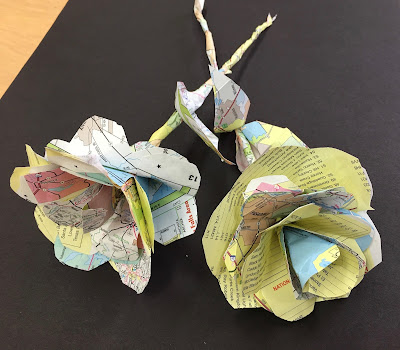 Posted by Kristen Applebee at 3:36 PM No comments:

Goodwill Volunteer of the Year 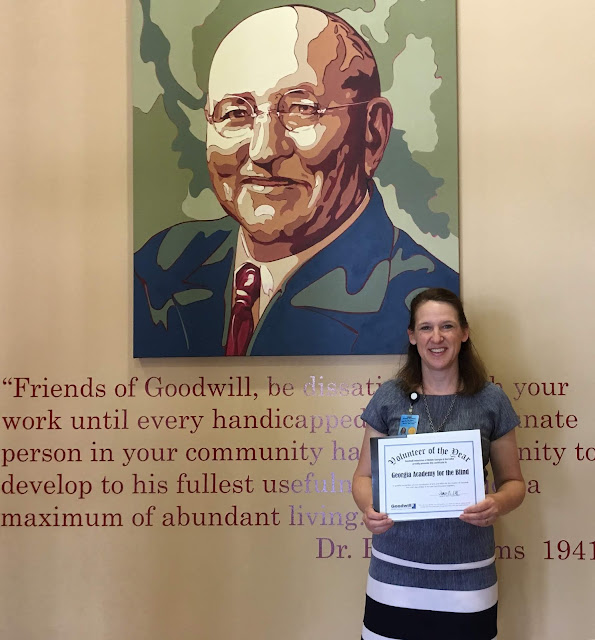 This month our central Georgia regional area of Goodwill Industries awarded my students and I with the volunteer of the year award for our many hours putting the art show together for them in January. There were about 500 people at the employee meeting/ party where we (among others) were recognized; The honor of being appreciated is just part of the fun of a happy partnership that I hope continues.
Posted by Kristen Applebee at 4:12 PM No comments: 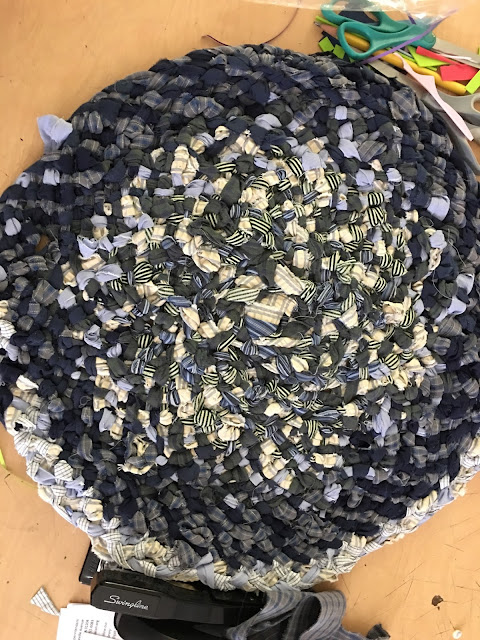 Teaching a textile art unit gave me a perfect opportunity to clean out unwanted clothes from my craft closet. I had meant to use husband's old shirts for quilts, but never got around to it.

I was taught to make a braided rug when I was young, by my adopted grandmother, but the task of sewing the braids together was so labor intensive, that I never did it as an adult. Luckily there is a no sew method, that makes things much easier, and probably stronger.  It requires four strands of fabric (1 1/2" to 2" wide). I tied the four strands together. 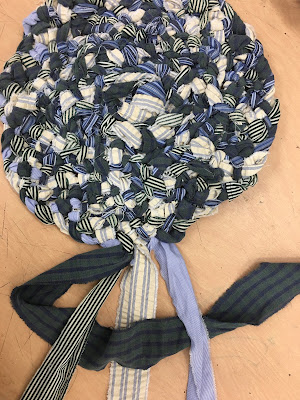 Then I took the first strand at the far left and went under the 2nd, over the 3rd, and under the 4th, ending with a small tug. I repeated the processes until about 5 inches of woven strands gave me enough wiggle room to wrap a small spiral.  Then I continued with the under over under pattern, except I ended by tucking it down through a loop from the previous weave. 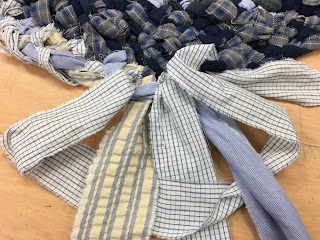 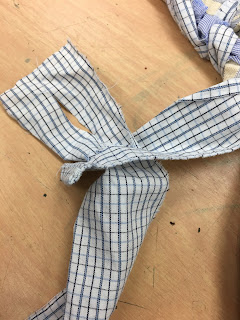 When a strand got too short, we cut a little button hole slit in the end and stuck the end of another strand through the hole. That strand also had a slit cut into the end so that the other end (of that long strand) could thread through it and be pulled tight. This was much less bulky than trying to tie the two ends together.

And so the rug grew as each strand connected to the existing spiral. You may need to pull a little to make the loops big enough to push the strand through. But it comes along pretty quickly. And once my students could work independently, I could sit back and watch.  I put a piece of tape on the top to remember that we were spiraling counter clockwise and keep the pattern and shape tidy. Some students made personal rugs that were the sizes of hot pads, and others worked together on bigger projects.


Posted by Kristen Applebee at 7:11 AM No comments: