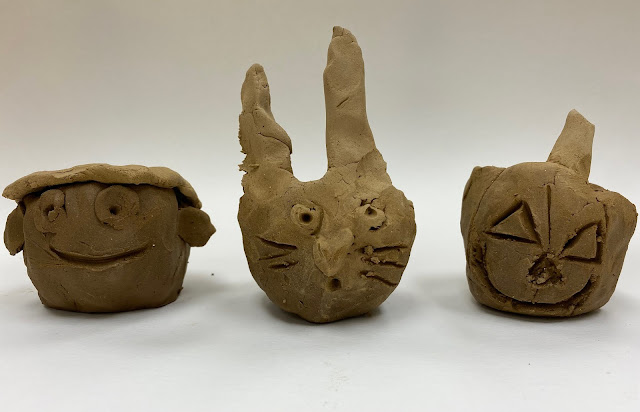 Pinch pots are the perfect clay project for little hands. And while some students insisted that their little pot was a pot or a cup or a mug, encouraging a little personification really brings that object to life. 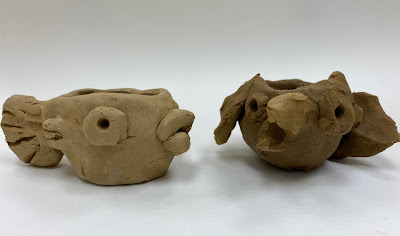 It's easy to find a favorite animal and have students to name body parts of that animal, this fish has fins and a tale, while the parrot has wings and a beak. It's OK to turn the pot on its side to make a monster or frog mouth or turn it upside down. 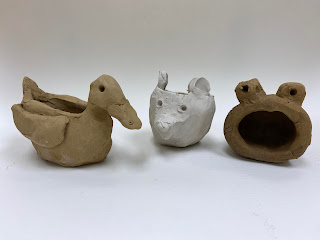 Students are also making a choice between whether they want to do a whole body or just a head. Most of them don't realizing their making choices until you start asking questions, like tell me how you decided to have the opening of the pot facing up? I don't want my students to think that default mode is the only mode. I want them to get so used to being asked questions that they ask themselves questions and open up possibilities for future projects. 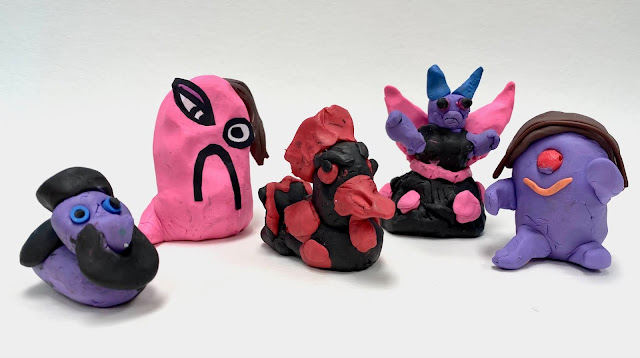 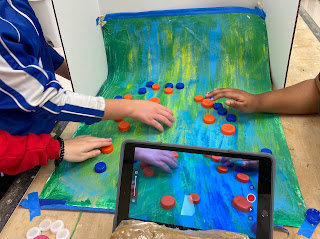 Trying to rewrite the curriculum every year, means that by now (year 9) I am stepping way outside my comfort zone and doing things I've never done before. But that's what being an artist means, making something that has never been made before. I got a Stop Motion app, made a make shift tripod for the iPad from a bag of clay, and my art students just started moving things around in front of the camera. Bottle caps, magnets, and lumps of clay. Animation takes 12 pictures to make every second of film, which means we needed over 1,000 photos for a 90 second film. At first students came up with the ideas as they went along. This was just practice. We went back to find back ground music and sound effects to reinforce the motions.
After we got familiar with the app, we started with the end in mind. A couple of students who improvised some pretty fun songs that we used for content. Students brainstormed ways to illustrate the song lyrics, created original claymation characters and built little sets. 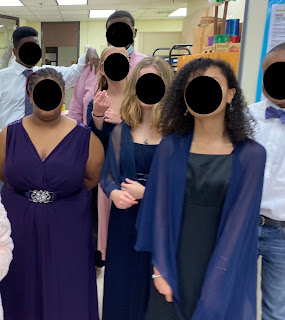 We edited the films by adding titles and voice-over for all of the students who are legally blind (100% of the student body). I wanted to make a very big deal about the fact that animation had never been done before in the 170 year history of our school. Just sending links out in one of the hundred emails wasn't going to cut the mustard. I got a teacher to help me find gowns for my girls. I spent a week ironing brand new $135-225 donated white shirts. I learned to tie bow ties. I dusted off the big popcorn machine, bought drinks and chocolate bars for a mini film festival.  My students took turns at the podium introducing  the next film, the way they would introduce a winner at the Academy Awards. I really wanted them to feel like it was a red carpet event and they were each a star.
https://youtu.be/lqjxkBpOFxU
We printed and posted fliers around the school that read "The World Premiere of GAB Animated Shorts: Art Class Boogie, The Secret Life of Bottle Caps, Come Fix your Plate. Starring: Blurb, Bob, Awesome Possum, and the Neck Bones."
At the Assembly, we started with the film by the little kids in self contained classes, and worked our way up to the the Art Class Boogie. We also included a film of puppet jokes by the middle schoolers.
https://youtu.be/Y3978CgdyMo
https://youtu.be/spimelLis4Q
https://youtu.be/xErej9b-bsk
https://youtu.be/4qITzlpUHe4
From moving magnets on a whiteboard to moving pictures on the big screen It was really fun to see these little iPad films get to be seen by the entire student body in the auditorium. We couldn't have asked for a more supportive audience. The school laughed when Bentlee said his named, clapped when Jordan spelled his name, and clapped along with the music.  Our World Premiere/ mini film fest/ animation celebration was totally worth the effort! Not too shabby for two weeks of animation experience in the classroom. 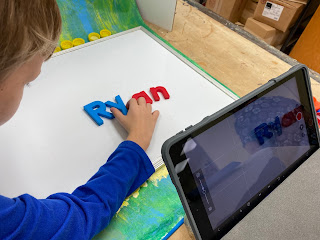 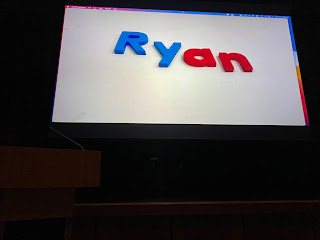 Posted by Kristen Applebee at 10:41 AM No comments: 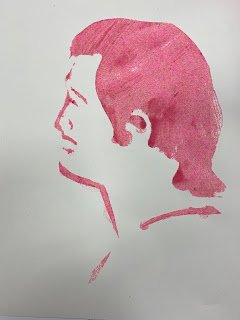 While the finished project of this sand image may look like it was inspired by street artists and their stencils, we were actually studying photographer, Vik Muniz. Muniz is a Brazilian artist who makes images (often based on master paintings) using non traditional materials such as recyclable items or chocolate syrup or sugar. When we discussed his sugar portraits of children whose parents work on sugar plantations, one of my students was excited about the possibilities. 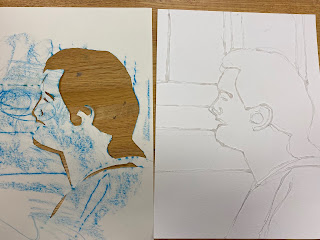 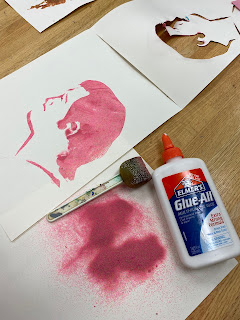 There were a few challenges however, one, sugar ants are really hard to get rid of once they find your sugar stash, and two, my student has zero vision and couldn't make a value drawing with sugar on black paper from observation. So we started with the same place we've started all month, with photographs of the student. I had traced this student's photo in hot glue for her water color assignment, so she already had a tactile place to start. She used a separate piece of paper to do a crayon rubbing of the hot glue image. I cut out the shapes and lines made by the rubbing. Then she used the stencil, a foam brush and glue to get a flat, even layer of glue onto another piece of paper, in the shape of her profile. She sprinkled with her favorite color (pink) sand, shook off the access and was thrilled to have a tactile self portrait to share with her family.  When it comes to making art history relevant: where there's a will, there's a way.

Posted by Kristen Applebee at 5:51 AM No comments: 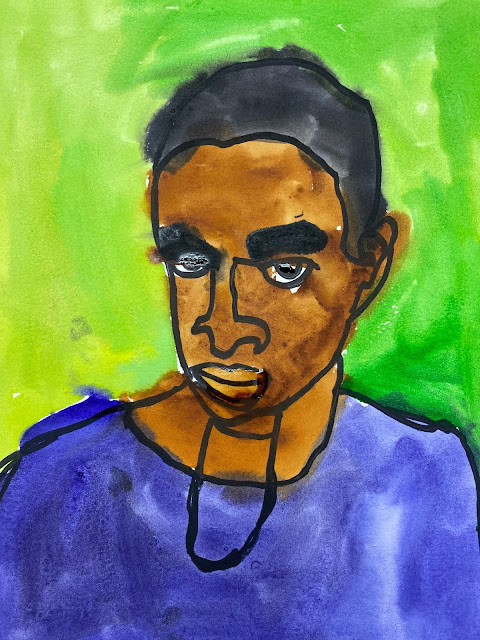 We really got as much as possible out of our photography unit, and have been trying to find as many ways as possible to make self portraits. We documented, photo collaged, painted ourselves, painted our photos, and now we are moving further and further away from the actual photograph, but only using paint and marker...but working from photos. 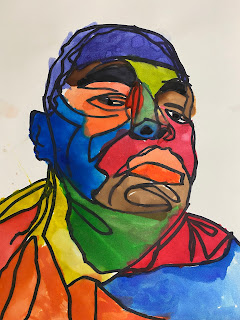 These portraits were created by tracing photographs on light tables or on the window. We used Sharpie markers so that they wouldn't bleed once they got wet. And then students were able to be as conservative or crazy with the color as they chose. It was a quick enough assignment that it was just done in a day by those who had worked ahead. I traced the photographs for those who couldn't see well enough to do it themselves, and I hot glued the lines for those who were completely blind. But everyone was able to paint independently once they could at least feel the boundaries, and the examples in this post were done without help.  Everyone was pleased enough with the results that we may be revisiting this assignment when we find some extra time in the future. 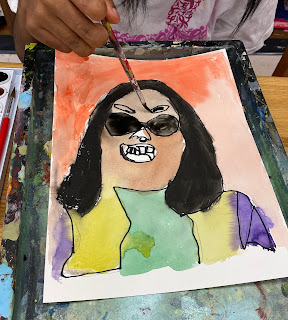 Posted by Kristen Applebee at 5:45 AM No comments: