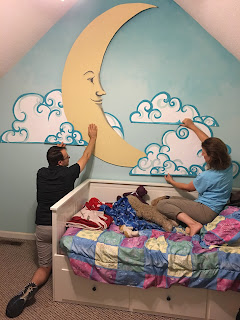 My daughter recently asked me to paint her yellow bedroom, a teal or turquoise, so that's what I did. And since I've been storing my homemade "paper moon photo booth" (See April 11th post), in our hallway for the past few months, I offered to add it to the sky-colored wall.

The trick to mounting this wooden wall piece, was making sure the screws were unobtrusive and aligned with the studs. There are  three layers of clouds with 2" blocks in between each layer, for greater dimension.  We covered the nails and screws that could be seen from the front,  with white, circle stickers, which were then painted over. Wood putty would have worked too, but it would have made it much harder to remove.  I gradated some darker paint form the top of the wall before adding a few tiny stars and light clouds for the illusion of even more depth. 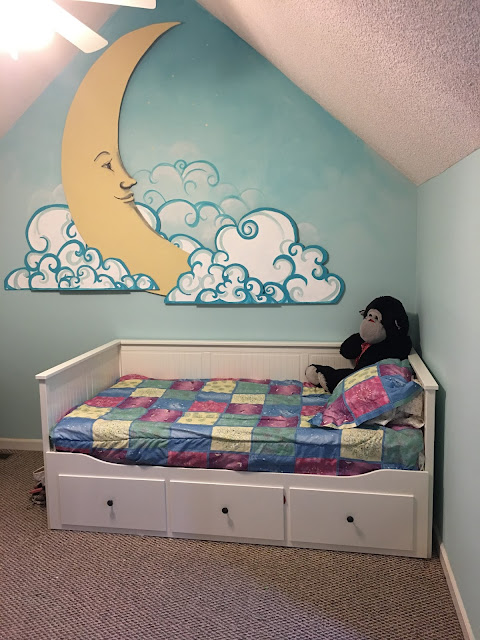 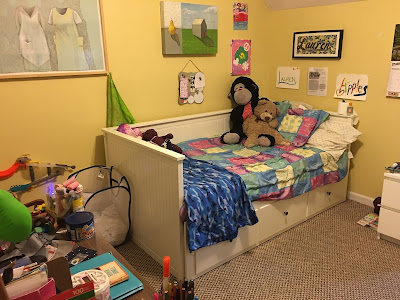 I know my daughter is growing up quickly and it may only bee a couple years before she is too old for this type of wall decoration, but compared to the busy visual chaos, seen in the "before" picture above, it is worth the effort for a couple years of simplicity. Here's to sweet dreams for my sweetheart.
Posted by Kristen Applebee at 10:08 AM No comments: