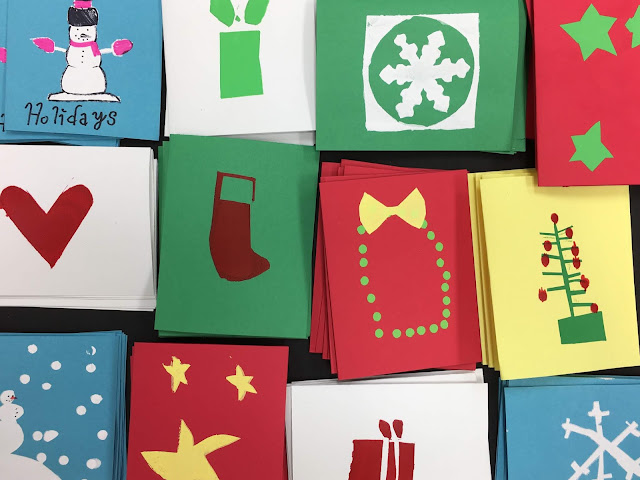 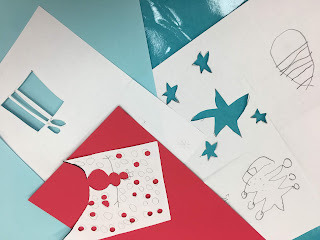 The first Christmas card was published in 1843, and the tradition caught on like wildfire. People love to be remembered and it is extra special, especially in this digital age, when the card is handmade.  My students created paper stencils, for cards, by cutting out Christmas-themed drawings. We taped the stencils onto the back of a  silk screen and then squeegeed ink through the screen and onto card stock. My students have done screen printing before, but this is the first time they created an edition. They used some cards to write prisoners who volunteer their time to work as Braille transcribers, and the rest will be for sale at the student Christmas exhibit. 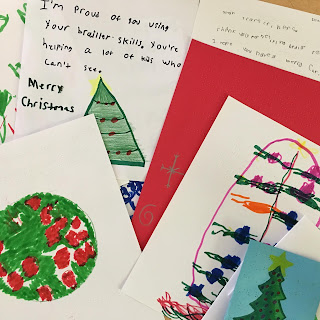 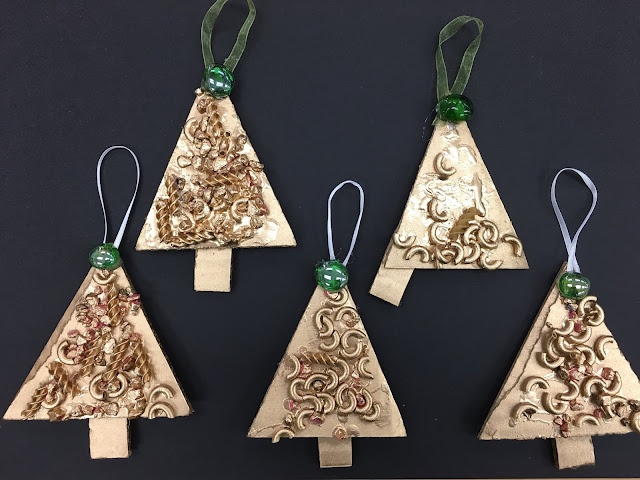 Toddlers, pre-schoolers and multiple-complex-needs students need to make things in order to build fine motor skills and feel a sense of accomplishment. One way to keep kids and happy, busy, and learning, this month is to make ornaments. A cardboard triangle and rectangle make the tree-shaped base for this easy ornament. My students puddled and "scribbled" glue onto their shape before arranging little things onto the glue: expired pasta, fish tank pebbles, buttons, foam shapes, beads, etc. Be sure to watch that little ones don't put small items in their mouth and choke on them.

We didn't even wait for the glue to dry completely before taking them outside and spray painting them. I hot glued ribbon for them to hang on the tree. The gold paint gives the tree a little bling, and you can pretend that the ones with askew trunks are supposed to be bells!
Posted by Kristen Applebee at 5:19 AM 1 comment: 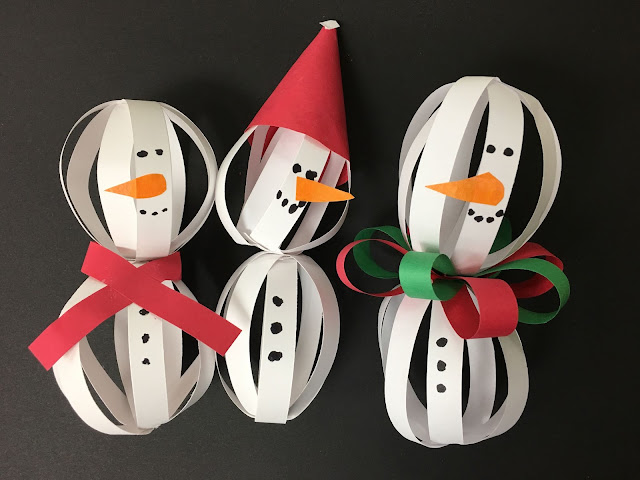 My first Christmas as a new bride, my husband and I had planned on spending the holiday with family in another state, but car troubles that left us stranded, broke, and in search of a tree.  We found one for $15 and I filled it with snowflakes of hardened royal icing. A couple decades later, as a teacher, I find myself still wanting to fill a tree with creativity and time rather than expensive ornaments.
For simple ball ornaments, I cut copy paper in half inch (by 8 1/2 inch) strips. These were folded to find the center and students made "a plus sign" and "a multiplication sign" to glue together in a star shape. One strip of paper was used to make a loop, and then dots of glue on the ends of the remaining strips were used to attach at the top of the loop.  These paper ball ornaments can just be used by themselves, or a couple of white balls can be glued together to make a snow man ornament. 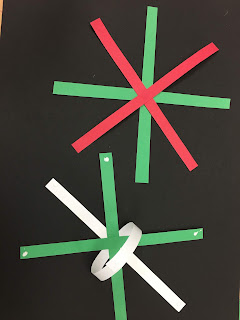 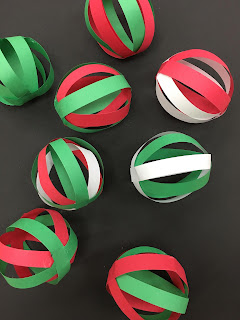 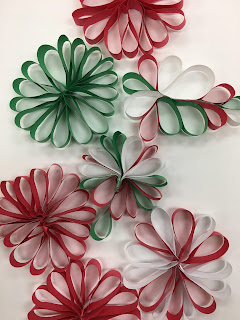 For students who wanted to try something else with the paper strips, I had them stack 8 pieces and staple the center of the stack. (Again, folding to find the center takes almost no time). Then the end of each strip was given a drop of glue to attach to itself, to form a flower petal.

For very low functioning students, I taped a couple of fuzzy craft stems (aka pipe cleaners) to the table by the end, place the other ends in each child's hands and then say, "cross over, switch hands, pull (apart)" over and over again until it was twisted. What takes a few seconds for someone without disabilities can take a long time for a child who needs help crossing their midline.

Students managed to practice some skills and contribute to the school festivities while having fun. 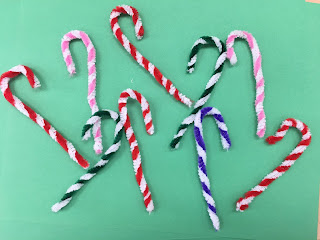 Posted by Kristen Applebee at 12:49 PM No comments: 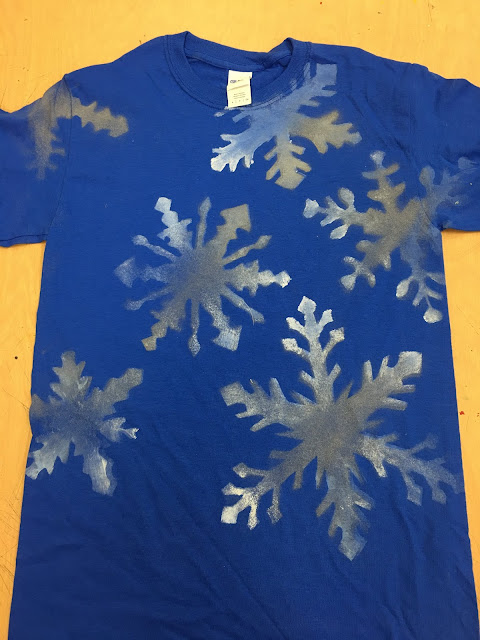 I was asked to design some snowflake t-shirts for the Christmas concert at school. I thought it would be easy to use paper snowflakes as stencils on white t-shirts with blue paint, but we already had a dozen blue shirts, so I had to work backwards. I cut simple snowflake shapes (with no little holes) out of card stock an then tossed the snowflakes and kept the remaining paper. These were taped together and used as a giant stencil. By turning and shifting the stencil, each t-shirt ends up one-of-a-kind. I used the white and silver spray paint I had until the white ran out, at which point, I just used a brush and sponge to apply some white acrylic around the edges of some of the stencil shapes. The results are less than perfect, but for a one hour concert, I think it will work. 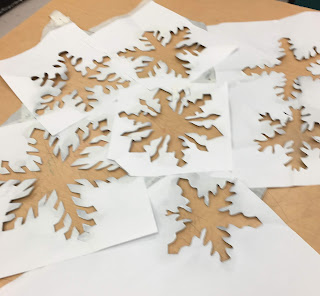 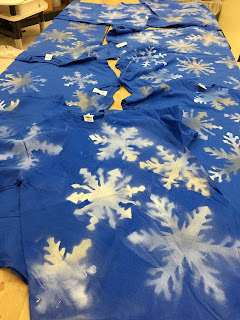 Posted by Kristen Applebee at 1:54 PM No comments: 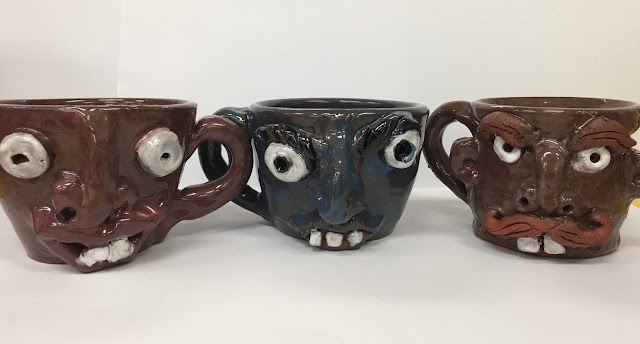 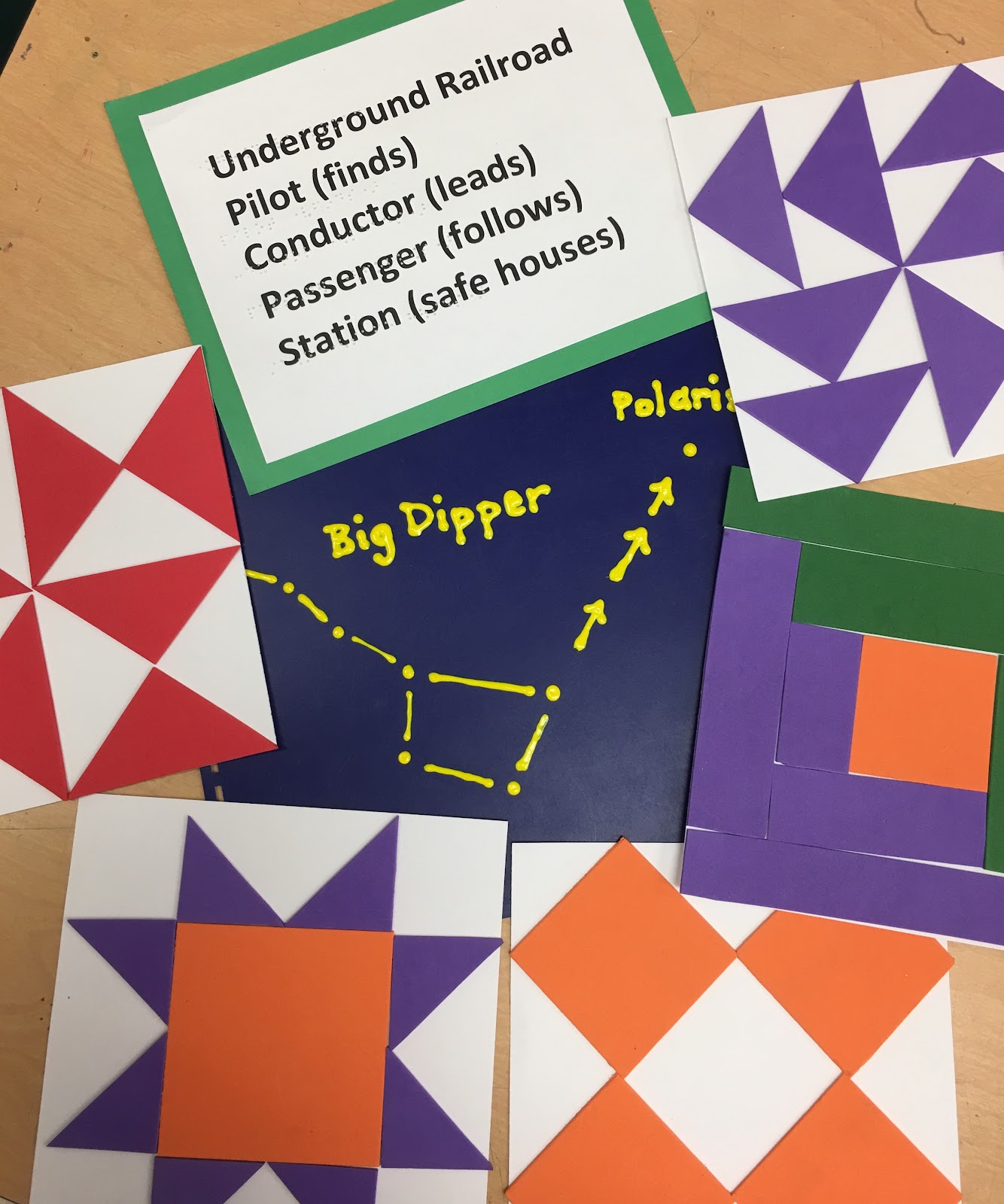 Face pottery is one of the earliest forms of post-colonial art in the United States. It originated in the mid 1800's with slaves, in South Carolina, who carried their beliefs from Africa. They used face jugs the same way they had used special wooden figures, which contained special items to ward off evil spirits. These "ugly jugs" were used as grave markers to scare away the devil so the spirits of their loved ones could go to heaven. The pottery was also buried outside of doors to protect the home. Some of the jugs traveled north with escaped slaves on the Underground Railroad . I have also heard that, during the prohibition era, some used the jugs to store moonshine. (In this case the ugly faces were used to scare children away). Any archeologist and art historian will tell you that it's not just writings that tell the human story.  Much of history is told through the objects we make.
This lesson plan was fun to teach because it lent itself to so many interesting discussion questions: Why would anyone make something ugly on purpose? How do beliefs and traditions impact art? Why would anyone risk their life to escape slavery? What is the Underground Railroad and how did it work?

In this lesson, students learned about parts of a jug (body, neck, mouth, lip, arms). They handled a wooden mask from west Africa and talked about the expression and aesthetic of the large eyes and open mouth. They learned the history of the underground railroad which began just as railroads started to be built in the U.S. and lasted the 30 years leading up to the Civil War (1830-1860). Students studied tactile freedom quilt squares and guessed the symbolism used to communicate to runaway slaves (North Star, log cabin, crossroads, bow tie, geese). They saw and felt a diagram of the Big Dipper and North Star, and learned how constellations helped lead people even without maps. 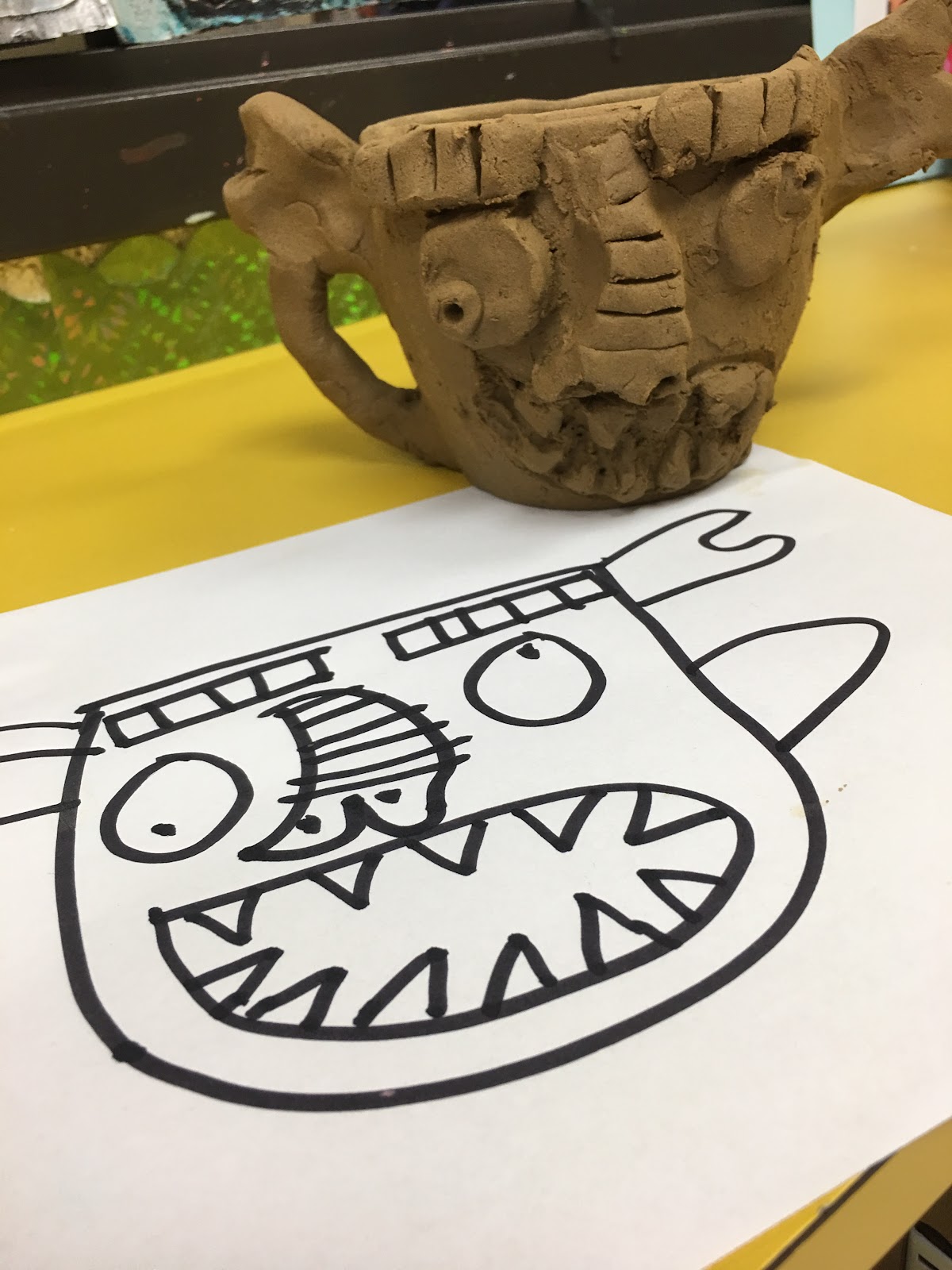 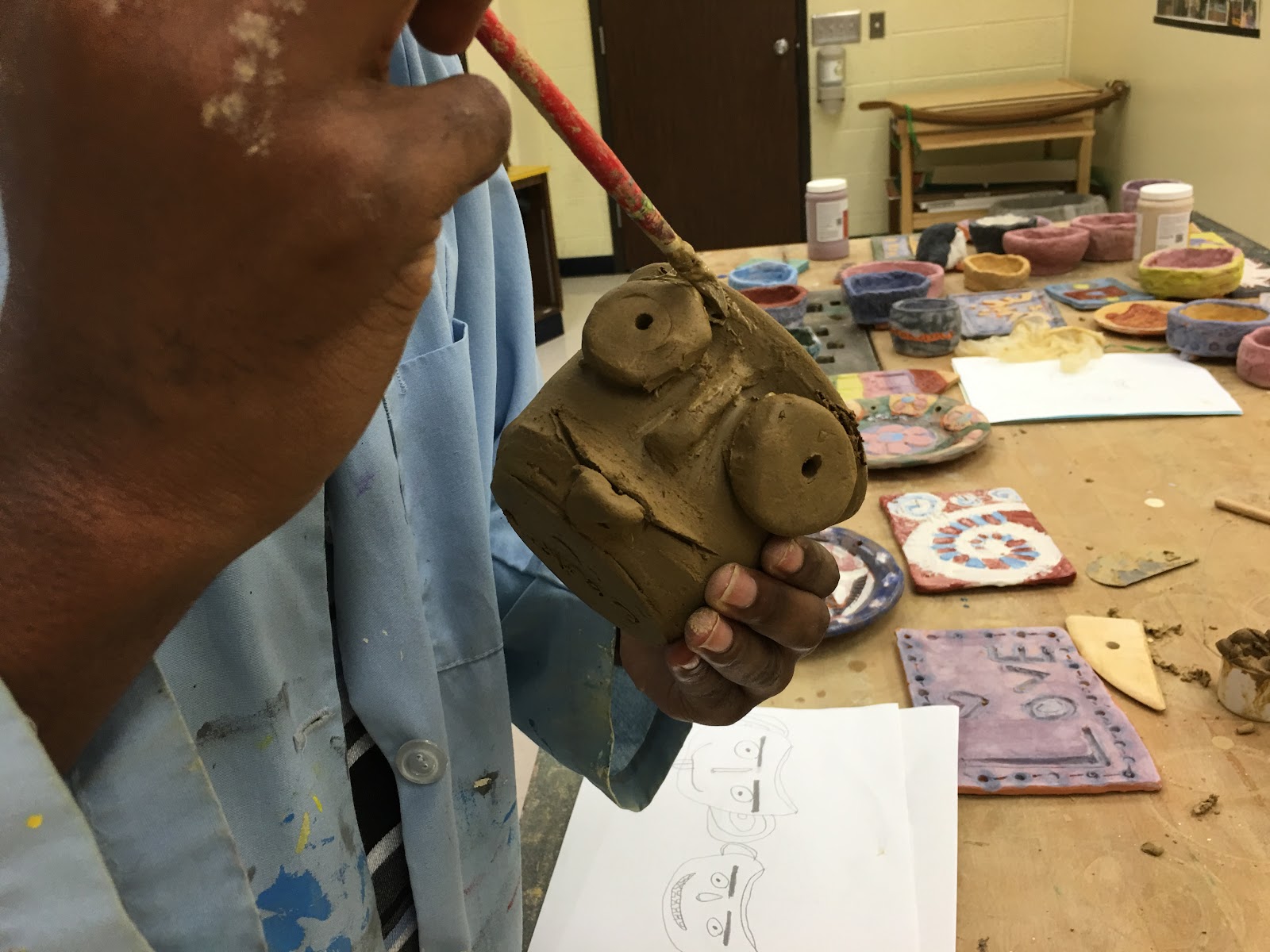 For the production part of the lesson, students were required to draw at least three sketches of ugly, crazy, or goofy faces. I showed them how to use the pottery wheel and helped them throw their first cup. They used the slip and score technique to attache a handle and face to their leather hard cup. 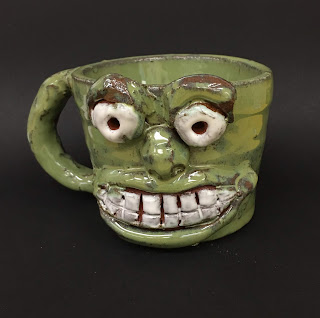 Then we did a bisque fire.


And glazed the mugs.

Opening the kiln to see all the crazy colors and expressions was so exciting! I've only done this assignment once before, years ago, but to me it is a great way to teach contextual understanding of an art as well as ceramic skills and techniques. It is also the perfect assignment to let students feel less afraid about making mistakes, because when your goal is to make something ugly, the bigger mistake the better. And there's beauty in that. 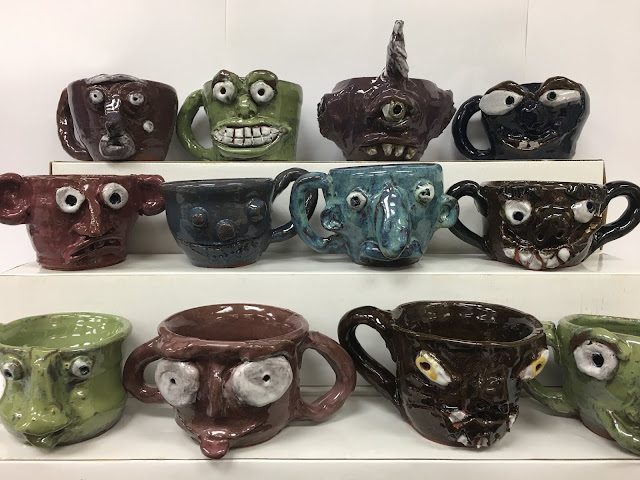 Posted by Kristen Applebee at 5:10 AM No comments: