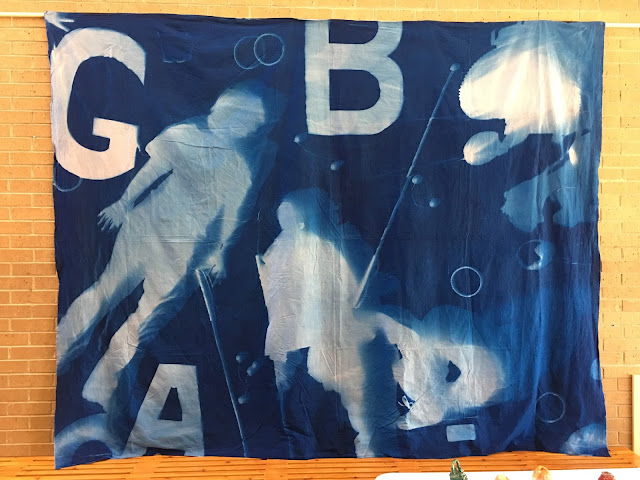 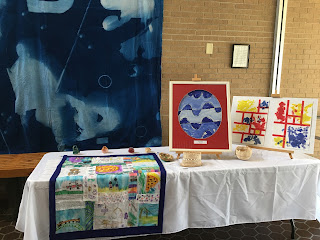 A couple of months ago, my art students made a giant cyanotype mural which served as a backdrop for our Spring Art Show, and remains on the school lobby wall.  Emily Gomez, photography professor at Georgia College, introduced them to this process.  To make a cyanotype, a photosensitive solution of potassium ferricyanide and ferric ammonium citrate are added to a piece of fabric or paper. The dried surface is than placed in the sun with something on top to make a silhouette. After about 10 minutes, the surface is rinsed and the shape of the object blocking the sun remains light while the rest turns a beautiful dark, Prussian blue.

When I was a kid, my mom had us make cyanotype prints using paper snowflakes for Christmas cards.  Small pieces of fabric (that can be purchased at art stores like Dick Blick) were used by students to make hand prints. Several of the students, however, got to lie on the treated king-sized sheet and make prints of their bodies, canes, wheel chair, and large cut out letters. They'll never forget sun bathing, fully clothed in the middle of a busy college campus. And neither will I. 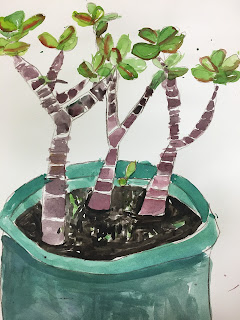 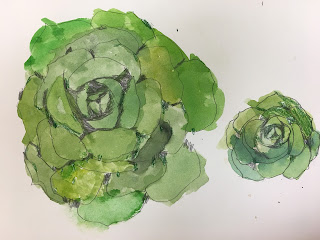 Botanical Illustrations are a perfect marriage of science and art. Accurate detail for each part of the plant is essential for a good illustration. 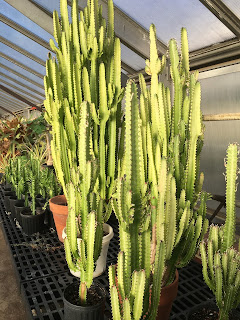 My school's horticulture teacher, Keith Blackwell, let me bring students to the green house at the beginning of the week and  allowed them to borrow a plant to illustrate. They were responsible for learning the name and characteristics. 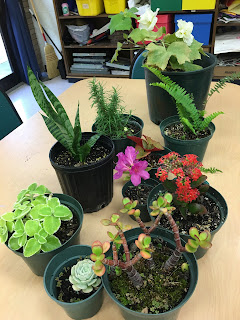 Some of these include: Cuban Oregano, Hen and Chick, Azalea, Rosemary, Fern, Jade Plant, Snake Plant, and Confederate Rose 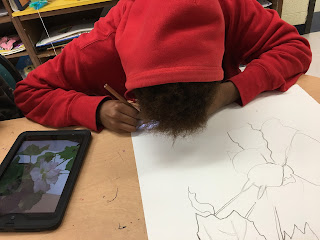 Some of my low vision students used the iPad to photograph and magnify (zoomed in on) the image. This student is using a magnifying glass with a special light for the drawing itself. People who are legally blind work from parts to a whole, rather than starting with the big picture and than moving to individual parts. 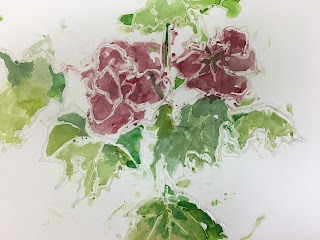 A couple of my students described how the plant felt, and then painted the drawing I did of their plant in hot glue. 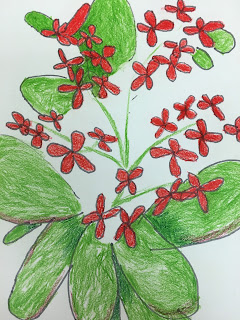 Other students were able to complete the assignment without any help or special equipment.  But I think each student felt a sense of accomplishment. I asked Mr. Blackwell to look at each finished piece and name the plant that was represented to ensure that they met the assignment criteria. I am so thankful for great colleagues who are happy to collaborate on interdisciplinary lessons.  This is how our students grow! 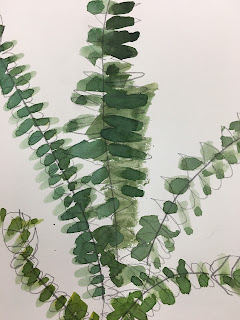 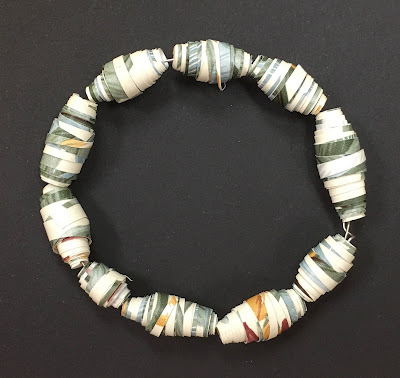 With Mother's Day a week away, I thought my students would enjoy making a their moms gifts, so we made paper beaded jewelry.   I got out old wall-paper books and we cut long triangular strips, about 15"-18" long, and 1/2"-3/4" wide). The longer the strip, the fatter the bead, and the width of the strip will be the width of the bead.  Be sure to use an X-acto knife or paper cutter for smooth edges. We started wrapping the wide end (not the two very long sides), around thin paint brushes, thick plastic needles, or toothpicks, and once it was about 1/4th of the way wrapped, we used a glue stick on the back (non decorated) side of the rest of the strip.  This can be done before winding begins too. I found it easier to pull the paper strip out from under the glue stick rather than run the glue down the paper. It used less glue and made less of a mess on the scrap paper protecting the table. 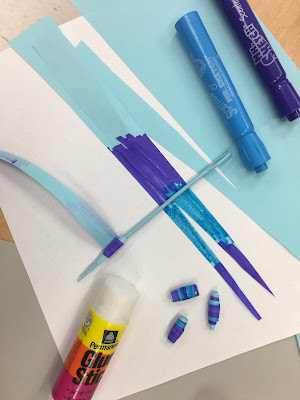 If you don't have big wall paper books, no worries. I almost liked using colored copy paper better. It is only 11" long and a lighter weight, so the beads aren't as thick, but they don't tend to unwind and you can be more intentional with color.  I used purple and blue marker to create a simple and somewhat uniform pattern on mine.  12"X12" patterned scrap book paper is another good option.

To add a shimmer, I used glitter nail polish.  First I strung the beads on old wire hangers and placed that over a bin, that way the polish wouldn't get on anything.  Some people dip their beads in wood hardener several times. Others, roll their beads on an embossing pad, sprinkle with embossing powder and then use a heat gun to melt the powder. This can be done several times too if you want your beads to look glass like.  Once the beads are dry, it is easy to string on wire or thin elastic for a necklace or bracelet. Store bought beads can be mixed in for some fun. 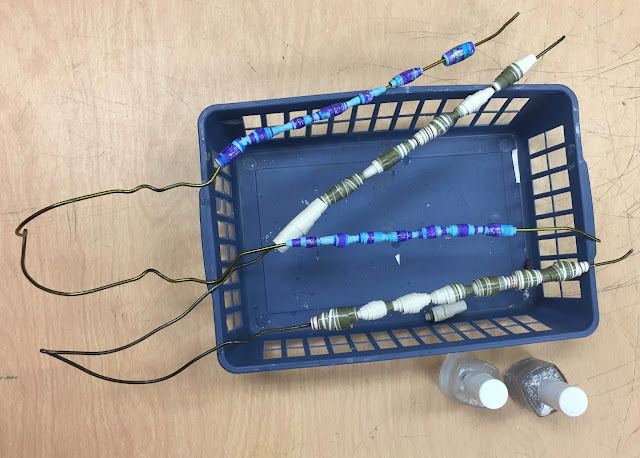 For my elementary school students, we began making bracelets by stringing paper clips. I got this idea from my brother's cub scout den mother, Cathy Breuninger. Kevin came home from his cub scout meeting one night with a beautiful necklace with extra fringe for my mother. I think they used fancy blue & white contact paper, but I wanted to make sure each student left with something that shows their mark. They each chose a color of paper, and color of makers, and the pattern they wanted to make.  Since most of these students are blind, most of the marks look like scribbles, but I did have a few who carefully made zig-zag patterns or tiny hearts.  We cut rectangles from the decorated paper.  The width should be slightly less than the width of the paper clip (about 1"), and the length is about 1/2-2" so it can be wrapped around the paper clip several times.  We used a glue stick and covered each paper clip with the decorated rectangles. Nine worked pretty well per bracelet. It would be prettier with tiny metal jump rings between each clip, and fewer paper clips, but these worked just fine for a 30 minute project. And we used the half of the decorated paper that didn't get put into the bracelet, as wrapping paper for their gift. 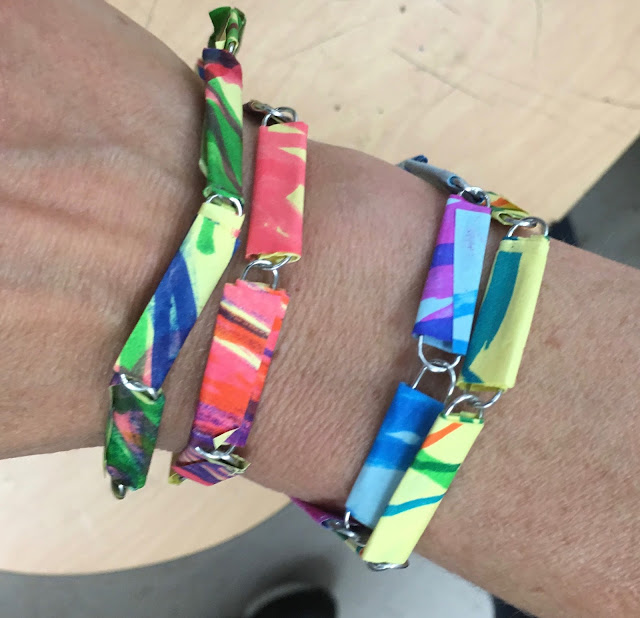 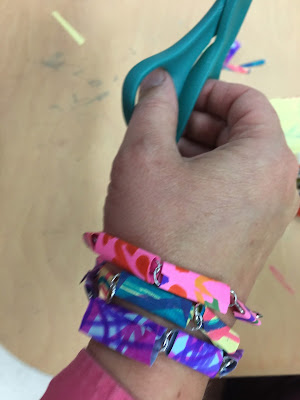 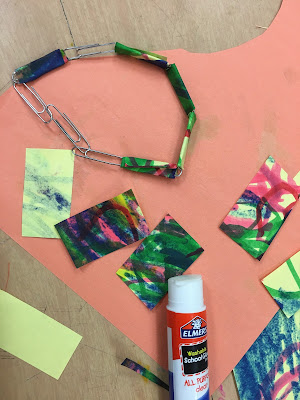 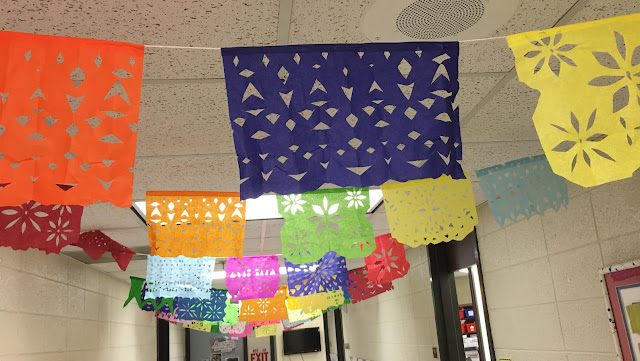 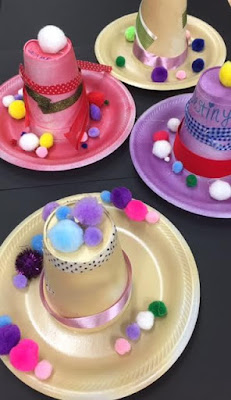 Cinco de Mayo is upon us. I celebrated by teaching my students to make two inexpensive and easy crafts: papel picado and sombrero decorations. For the sombreros I hot glued upside-down Styrofoam cups to plates. The students decorated these by spray painting, and gluing ribbon, and pompoms.  The bulk of the lesson came from my dramatic telling of France and Mexico's battle at Puebla on the 5th of May, 1862.

Older students cut rectangles of tissue paper, either by folding it like a snowflake (for a radial composition) or an accordion and in half again for a crystallographic balance. The word "papel" means paper in Spanish, and "picado" means cut or chopped. I hope when at least one of my children gets married, they will let me make them a bunch of white papel picado decorations because I can imagine a large room (or garden) transformed for $20 worth of tissue paper and a week's worth of evenings spent watching movies and cutting.  Until then, I'll continue to find little projects to honor Mexican culture and history. If you are going to celebrate Cinco de Mayo, why not do it with a taco and a craft?
Posted by Kristen Applebee at 4:25 AM 1 comment:

Hooray for May Day! 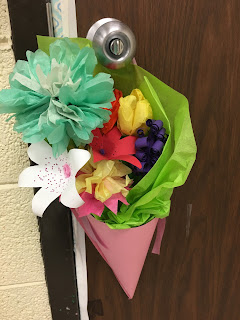 May 1st is May Day is International Workers Day to celebrate rights of laborers, but it is also an a spring celebration dating back at least four hundred years, complete with music and May Poles. The May basket tradition that I remember as a child, is one in which a paper basket is made, filled with treats and/ or flowers, and then left anonymously on someone's door.  My students spent last week making paper flowers for May baskets. 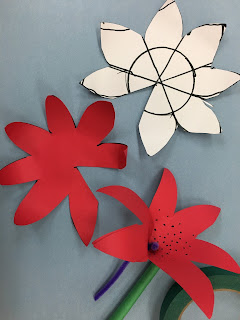 One day they made lilies, which required them to trace a circle inside a circle and divide it into 8 sections like pizza slices. A dot in the center of each section on the outer ring would be the point of each petal and then where the straight line (slice edge) intersected with the smaller circle would be where the petal ended. Templates were drawn and cut. One of the petals was removed completely down to the center point of the circle (an entire pizza slice removed.)  The template allowed students to trace and cut several more matching lilies. Dots were drawn towards the center of one side, then the flower was flipped and the petals were curled with a pencil.  A cone is made with the dots on the inside, and glue used for overlapping petals.  A pipe cleaner with a little roll on the top is placed on the center just before gluing. 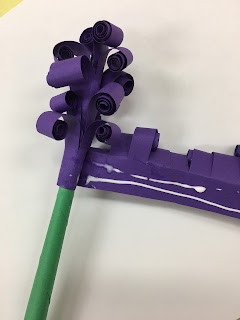 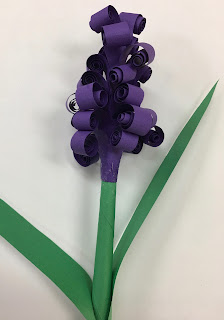 For hyacinth, half a sheet of construction paper (lengthwise), gets folded up 1/2-3/4" before cutting slits down to the fold.  Each slit (about 1/3" apart) is curled. Some of my students used a toothpick for a nice tight curl. We ran a bead of glue on the edge and used that to wrap down the stem.  Stems were made from green paper rolled tightly. I started cutting the paper in half diagonally and rolling from the right angle corner towards the longest side of the triangle, and then twisting to tighten before gluing the last little flap in place.  We even taped our shortened lily pipe cleaners to the top of the paper stems because they looked better and were easier to bundle or stand in a vase. Basically 2 half sheets of paper and a few drops of glue will get you a beautiful hyacinth! 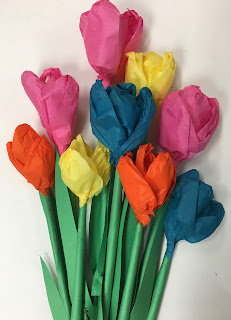 Tulips were easier than I thought they would be and ended up looking almost real!  To make, we cut 4 rectangles of the same color, each 2 inches wide and 5 or 6 inches long.  The center was pinched like a bow tie and then twisted twice and folded back on itself.  We placed our thumbs in the center to pull the tissue around like a little spoon and then pinched the bottom before gluing each petal to the stem. First two are across from each other (like a clam top and bottom) and then the next two filled in the sides.  These look best with long thing green leaves glued to the stem. 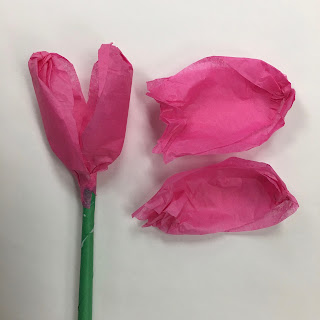 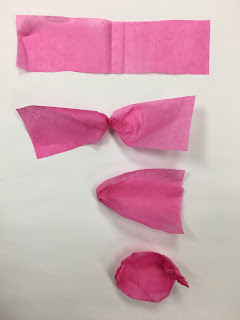 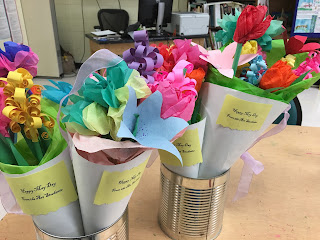 May baskets are made by forming a cone of paper and stapling and gluing before trimming the pointy edges on top. We stapled ribbon to hang on a door, and lined each cone basket with a larger piece of tissue paper before placing 5 or 6 flowers in each.  My students are not as stealthy as I'd hoped but they still had fun pretending no one saw them as they knocked on the doors of our administrators and scurrying away.  And they have enough left over for a Mother's Day surprise.  Happy May Day!