“The single most important thing you can do for your family may be the simplest of all,” according to Bruce Feiler, “develop a strong family narrative.” In his New York Times article, The Stories that Bind Us (March 15, 2013), he told of a study done by psychologist, Marshall Duke and Robyn Fivush, of Emory University, in which they asked children of four dozen families questions about their parents or grandparents. It is called the Do You Know Scale. 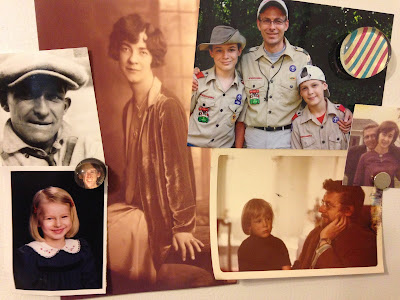 “Dr. Duke and Dr. Fivush then compared the children’s results to a battery of psychological tests the children had taken, and reached an overwhelming conclusion. The more children knew about their family’s history, the stronger their sense of control over their lives, the higher their self-esteem and the more successfully they believed their families functioned. The Do You Know Scale turned out to be the best single predictor of children’s emotional health and happiness” (Feiler, 2013).

I tried some of these questions on my own children. “Do you know about the day you were born?”

“The midwife had a fuzzy sweater!” my daughter exclaimed.

"You were at Ohio State!" my son said.

“In the Art Department! Something about that guy Jeff,” my daughter hoped for extra points.

I don’t know whether or not the stories they’ve heard so many times are making them more successful and emotionally resilient but when I consider how I deal with frustration and setbacks, family narrative matters enormously. I often look to my ancestors, one of who was pelted with stones, ship wrecked, and driven from his home at gunpoint when he was near death with illness. Then I realize that maybe waiting eight months for a rejection letter from a publisher isn't such a big deal.

World War II ended on the day my uncle was supposed to be executed in a German prisoner of war camp. So maybe things will work out for me in the end too.

When elderly people have looked on disapprovingly at my unruly toddlers and lectured me about how children were well mannered “back in the day,” I could nod soberly while internally giggling at the fact that one of my ancestors, as a child, almost blew up the Mayflower.

When my middle child was twelve, I said, “I’m not sure if you know this or not, but education is pretty important to your dad and me.”

Of course he already knew. He knew without me needing to say it because he knows that at family reunions, when my parents sit down with their six children and our spouses around a campfire, there are thirty plus college degrees sitting around the campfire. He knows because he sees us studying, teaching, checking homework, and living on the academic calendar. I don’t need to say it explicitly, but I do it anyway, and when I do, I am articulating the narrative.

The other day I asked my family the five major things that define us and every person included fine arts, travel, education, and faith in their list. My kids haven’t ever met my Grammy Award winning/ Broadway performing cousins, but they know that music, dance, and art are important to our family and when they say it out loud they are articulating a narrative.

It is easier for a kid to stand up to peer pressure when she sees herself playing a role in the family narrative. “No thanks, we don’t smoke,” implies that she is not alone.

And in fact, kids are never alone when they have a family and a family story to tell, reflect upon, and be a part of.

Posted by Kristen Applebee at 6:29 AM No comments: