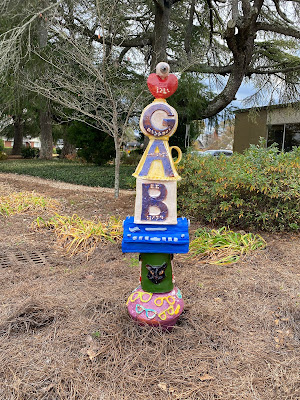 Outdoor art isn't something I have a lot of experience making. My class did a totem pole for the sensory garden at our school a couple of years ago and it was a big hit. I don't know that anyone is using it for educational purposes other than me, (It is a Georgia theme so our state, flower, fruit, fish, reptile, insect, vegetable, butterfly, bird, tree, and motto are represented in the piece) but it did make the cover of our school handbook and calendar, and influenced our school theme: Standing tall, standing together, which became our school t-shirt for the year. 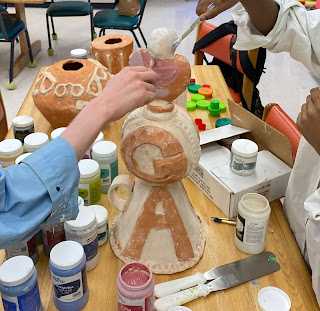 This year, I started with asking for student proposals. They didn't seem to grasp the idea of a unified theme. A couple people picked a principle of design, like line which looked like a striped pole. Others, had symbols and letters, but there wasn't much content. When I'd ask questions like, "What is everyone's favorite part of Roni's proposal drawing?"People said they liked "the heart!" So we had a heart, and we had some random letters. What letters represent us as the Georgia Academy for the Blind? G.A.B. So there we had a theme. A heart, and a school. We added an eyeball with the on top of the heart since we are visually impaired here. Then each initial for our school had Braille on top with the part of the school's name represented by that letter. The "A" was in a cheerleader megaphone. We added our school mascot (Panther), white canes, a Perkins Brailler. and glasses.
Working as a team meant that the first period class could roll a slab and cut out the pieces, which would harden enough for the 3rd period class to assemble, and then the 4th or 5th period class could work on details, before you 6th and 7th could start rolling slabs again. Everyone contributed to pretty much every part. 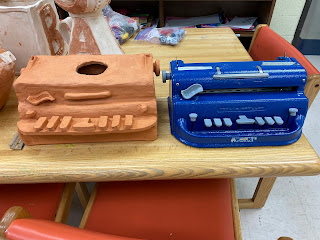 Problem solving: How do you make a big hollow Brailler without it all collapsing in on itself? We can do the bottom and sides, but how do we attach the top on the inside with just a little hole? We started with a big hole that we could fit our hands in to secure each seam, before closing the hole up until it was the right size.
Set backs: The first Brailler, which took an entire day to make, started cracking, and by the time it dried, there were large, irreparable cracks all over. We had to start over, and this time, we would make sure we built up the top from the lowest step. We used thicker laws.
Celebration! We invited the entire high school to the totem pole unveiling, which included the chorus singing the alma mater, the cheerleaders doing a couple of cheers, a drum roll from a percussion student, the big reveal, and then a student giving a speech about the history of totem poles and describing our pole and what each part represents. Short and beautiful. Go G.A.B! Give me an A-R-T! It's fun to teach students how to work together for a cause that is bigger than the individual.
Posted by Kristen Applebee at 3:32 PM