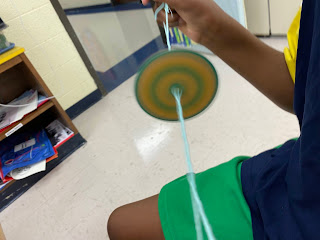 Before the days of Fidget Spinners there were tops and button buzzers (aka whirly gigs). These seemed like the perfect thing to add to my art class "toy-making" unit. Cardboard, makers, and either string or a toothpick is all it takes to make these simple and fun toys. 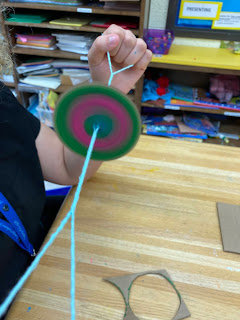 For the button buzzer we traced a lid or jar to make a circle. We cut it out and then picked two primary colors, knowing that once the circle started to spin, they would blend to create a secondary color. Two holes were poked on either side of the center of the circle. I figure a finger's width is a good measure for how to distance the holes. We cut a piece of string or yarn a couple feet long, then threaded the ends through the holes so that they both came out the same side. I tied a couple square knots before sliding the disc to the center of the loop. Then it's just a matter of holding both ends of the  loop, swinging the disc in a circular motion about twenty times before slowly pulling and releasing, pulling and releasing. When it starts to die down, try nursing it back to motion before giving up right away. The trick is to let your hands get close enough together for the string to wind itself one direction, pulling to spin it the opposite direction and then letting it continue to wind in that direction by relaxing and shortening your distance again. The timing is tricky but if my students can catch on, you can too. 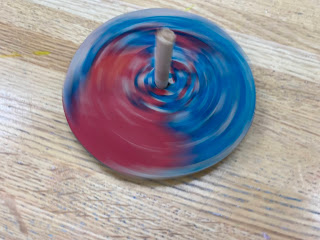 A decorated circle of card stock and toothpick can be used to make a top, but we used cardboard for added sturdiness, and because the toothpick kept sliding, we swapped it out for a thin dowel with the bottom sharpened with a pencil sharpener. Placing the stick in the very center is essential for the top to spin right, and a little glue makes for a good reinforcement. If it seems off balance, it's OK to trim the tiniest amounts at a time to try to get it all balanced. The tops worked well enough once students learned to spin them, but the button buzzers held their attention for longer periods of time. Have fun experimenting with your own spinning toys.
Posted by Kristen Applebee at 9:23 AM