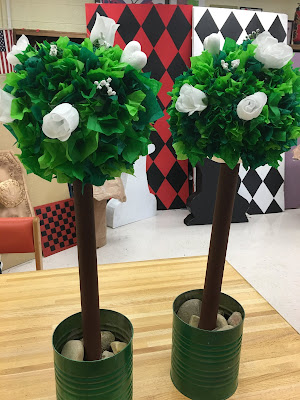 Please universe, don't let prom be canceled this year. This week and next we were supposed classroom instruction, then a week of spring break. The week we got back was going to be our school's prom. I had a huge list of things I wanted to have students work on, to prepare, these next couple of weeks, but last Friday, (just before we put our students on the bus) it was announced that the next two weeks we would do our part to slow down the spread of Covid-19 by working from home. I handed each student a package or markers, a set of watercolors, paper and watched them leave before scrambling to gather my own supplies before campus closed.
I said goodbye to the unfinished topiaries that we made with long cardboard tubes, foam balls, and squares of tissue paper. This was the 3rd prom we used those free #10 cans. Once to hold branches, adorned with origami cranes, once to hold New York Street Signs, and now to hold the rose bushes of white (and red?) in reference to the part in Alice in Wonderland when the playing cards were painting the roses red. 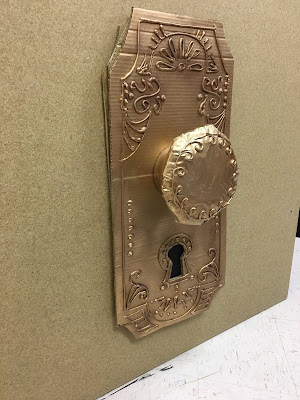 The school supplies guy was getting rid of a large chipboard panel which is solid as can be, but had 6 holes in it, the size of paper punched holes in notebook paper.  I found some very long, prong fasteners to poke through cardboard and out the back of the wood. Then I glued other cardboard on top of back cardboard, so that I can reuse the board without any risk of messing up the surface.  One student used a plastic hoop topped with a cardboard circle and paper mache for the knob, which I glued onto a very wide cardboard cylinder. (Don't ask where I get this stuff, I don't remember). I cut a key hole (the board underneath was painted black), decorated it all with calk, and had another student spray paint it gold.  Remember when Alice slipped through the key hole?
I had planned on taping a ton of paper flowers on the remainder of the about 4'X4' board, but I'm not sure now. That scrambling Friday, I had made my second trip, in two days, to the frame shop across the street. It is closing and the owners let me haul of piles of mat board and boxes of small frames.  As everyone else was getting in their cars and driving home, I was cutting out light mat to fit into the frames and trying to figure out how to make keys for each frame.  That might be adornment for our doorknob decoration. Or maybe they could go on tables? Or maybe they could hang from above? Or maybe we won't have prom. The senior trip to Pigeon Forge was canceled. Our trip to New York City was canceled. 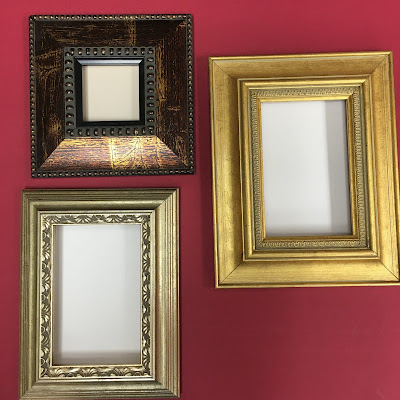 One thing that will never be canceled is a chance to enjoy the creative process; so even if there's never a reason to use these decorations, at least my students and I had a chance to look at cans, tubes, cardboard scraps and styrofoam spheres and see them for what they could become. I always take great pleasure in the process of making, and the satisfaction of knowing that if I didn't exist, that thing I made wouldn't exist either.

Posted by Kristen Applebee at 5:17 AM