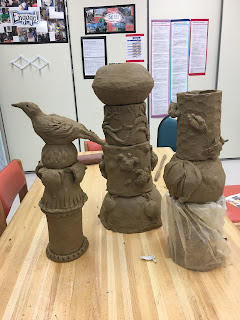 When I asked a student if he'd rather make Vadalia onions or honey bees out of clay, he said, "I don't know how to make those!"  As if this was a skill that everyone else had but him. "I don't know either; I've never done it before. Has anyone in this class ever made onions or bees out of clay?" No one in the class had.  "You're not alone," I explained. "That's why we're here in art class: to figure it out! We can only learn how to make those things by trying to make them." 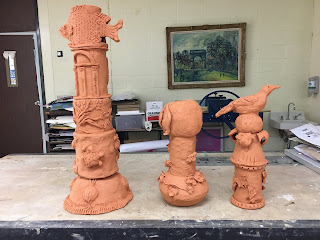 I'd never made a large, ceramic, garden totem pole either. I figured we would need a metal pole, and that we could slide each totem on like we were beading a necklace.  First things first:  permission from the principal for a student made sculpture to go in the campus sensory garden. Second: find a pole, which was just a matter of asking the horticulture teacher. He had a few, very long metal, fence poles. Third:  Come up with an idea.  The students debated for a day or two before we settled o the theme of Georgia.  Did you know that the gopher turtle was the state reptile and the Cherokee rose was the state flower? We did our research until we 10 symbols of Georgia to divide up between 12 students.
Lastly, the work began.  That's when I realized that I can't trust my Special Ed students to work on a totem completely independently.  So we used the slab roller and worked in small groups on a totem or two at a time. 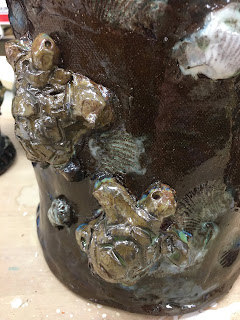 We used real sea shells pressed into clay to make molds for clay shells to go with the tortoises.

Cardboard hexagons were glued to a larger piece of cardboard and pressed into the clay to make a beehive.


The clay got darker during the glaze firing, so many of the colors were much darker than we'd hoped. The terracotta color of the bisque firing was perfect for our Georgia peach, so we left it unglazed, but when it came out with the glaze fired portion of the pole, it was tomato red, so I painted it back to it's peachy color. 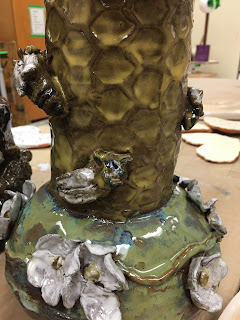 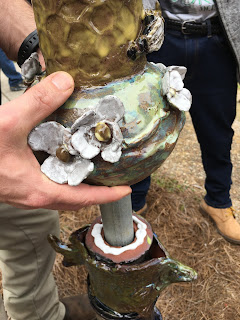 We dug a hole that was about 3.5 feet deep and packed it with soil (most of which was Georgia clay).

Then we slid each of 5 sections down the top of the pole, caulking between each layer. One hole was slightly small, but a little filing of the edge, and it went on just fine.  Other holes were a little too big, but the caulk helped to make it more stable. 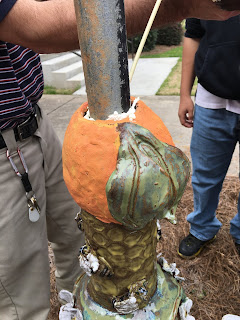 And we sprayed foam inside most of the sections to keep anything from rattling around.

Now we have a very stable 5'4" ceramic totem pole in our sensory garden which can be seen or felt by everyone who comes on campus. The totems include a live oak trees, a large mouth bass, honey bees, Cherokee roses, Vadalia onions, a peach, a map of Georgia, gopher tortoises, tiger swallowtail butterflies, the state motto (wisdom, justice, moderation), and the brown thrasher. We don't have a state invasive speces, but I added some kudzu leaves as a nod to the plant that ate the south.

The names of each student who worked on it go around the bottom totem. I like of them coming back as adults one day to show their children the pole they helped create. 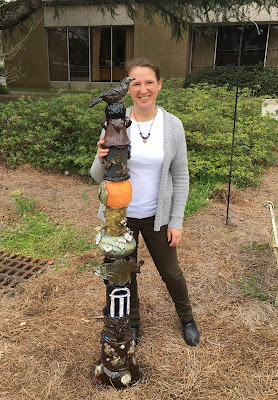 Posted by Kristen Applebee at 5:19 PM