Creativity in the Classroom: Character Development in Writing

Anyone who knows me, knows I love my full time job of teaching art to 5-22 year olds (grades K-12), but summers at Wesleyan College remind me that my absolute favorite is teaching graduate students. I had a blast co-teaching a Masters of Education class about creativity this month and it was so much fun!  We painted, mind mapped, created illustrated type, danced, sang, and wrote. 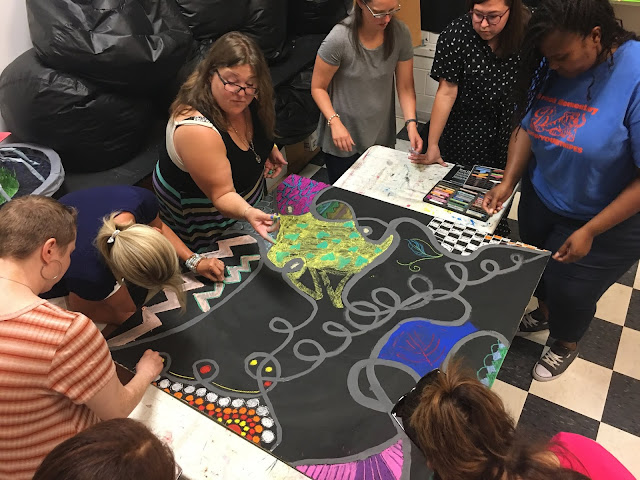 One of my favorite lessons for elementary school students, which I shared,  focuses on character development in writing. I start the lesson with an exercise in having students make predictions about the characters in John Frank's hilarious book, THE TOUGHEST COWBOY.

"One of the characters is a miniature poodle.  What do you think a good name for a miniature poodle would be?  Another character is the camp cook. Can you think of the perfect name for a camp cook?"  I ask as I lay out a description label each character. Then when I read off the actual names of the characters in the book, students match the name to the description. It isn't hard to figure out that "Bald Mountain" is the name of the tall bald character, and "Grizz Brickbottom" is the toughest cowboy.  Once the students make their predictions, I read the story and we pause each time a new character is introduced to check our predictions. 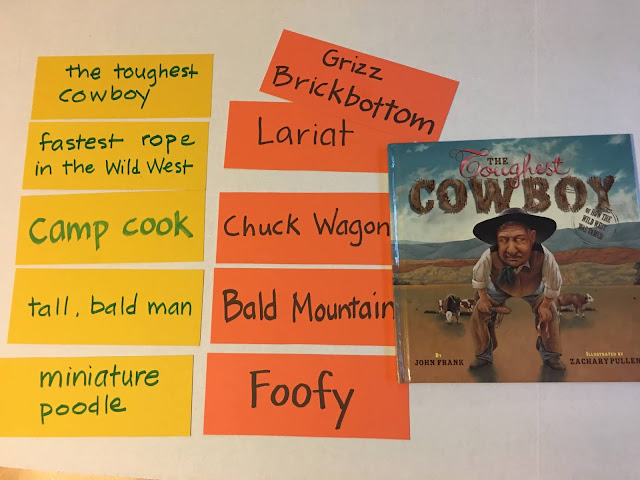 We discussed the fact that a lot of great authors who use descriptive names for their characters. In BLEAK HOUSE, Charles Dickens named the flighty woman, who was obsessed with her pet birds, Mrs. Flight. His names Lady Deadlock and Tiny Tim make perfect sense for the characters they represent. Dr. Suess couldn't have been more accurate when naming his characters, "Cat in the Hat" or "Thing One and Thing Two." The comics offer us Superman, Spiderman, Cat Woman, and The Joker. TV gives us characters with names like Cookie Monster, Fat Albert, and Sponge Bob Square Pants

Then we developed a character as a class before giving him or her a descriptive name.  I stood at the board, asking for details about our character, jotting down the answers as quickly as they came. Sex?Boy! Age? 14. Place? Montana. Year? 1984. Family situation? 10 sisters in a mixed family. Then comes the most important question. What does he want?  Baseball. That's all he cares about. All he wants to do is play baseball. Toss in an obstacle and we've got ourselves a plot.  There is no baseball team in his small Montana town. By the end of the story we are bound to see a little team emerge with uniforms and possibly a win...all because of little....(here's where we had to give him a name) Henry Homer.  So within about 3 minutes of brainstorming, we've got a character, story, and even a title: HOME RUN FOR HENRY!

After doing this a couple times in a  group setting most students will be eager to create their own character, especially if their idea of an old lady who lives on a moon or their mermaide living in an aquarium in a museum in the 1800s didn't get used during the group activity.

Another collaborative idea to develop characters comes from the 1930's French Surrealist Artists and their Exquisite Corpse exercise. It feels like a game, and was in fact, a past time done in cafes, but there's nothing wrong with education feeling joyful! One person draws the head at the top of a piece of paper, before folding it down and passing it to their neighbor, who only has a couple neck marks to go on in order to draw a torso. After this is folded down, the last person adds the legs.  So you may have a robot head with bird arms and ballerina legs.  Try giving that character a descriptive name and some characteristics!

Students feel empowered when they have the green light to get in the driver's seat and, fueled by creative juices, move an idea forward. For children (or graduate students) who aren't used to creative problem solving, it will take a little practice, but once they realize their ideas aren't going to be shot down, they will take more risks and end up with some exciting characters and plots.