If I Were Pharoah For Just One Day

For a fresh look at an ancient civilization, my students used technology to print photographs of themselves for a mixed media "self portrait as pharaoh" assignment. We watched videos about Ancient Egypt before discussing the mummification process, what life was like along the Nile, and how tomb raiders were tricked by pyramid architects. Then we looked at traditional head-dresses, before each student picked one for their two dimensional self. They used collage and oil pastel for their costume, boarder, and background. Then they embossed their name in foil for a cartouche using hieroglyphs. 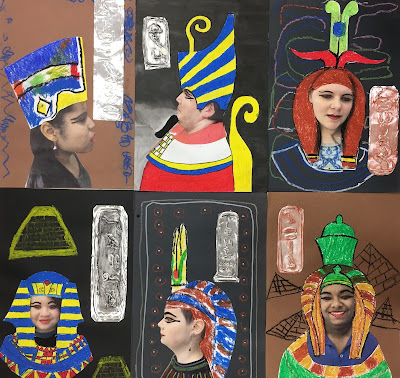 We ended our lesson with a Venn Diagram to compare what we'd learned about Egypt with our previous week's study of ancient Greek's culture, religion, architecture, and mythology. It's just matter of time before some fashion designer brings headdresses like these back into fashion. Hey-it could happen!
Posted by Kristen Applebee at 12:57 PM