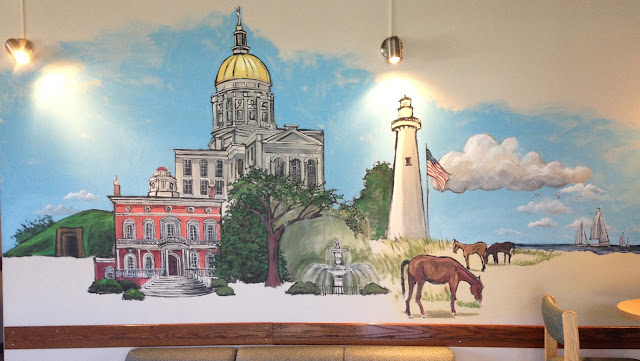 This year we, on the school media committee, decided to do several school-wide media festivals, each under the theme "Georgia On My Mind" and so we had a couple Georgia authors, such as Carmen Deedy come to work some story telling magic one day; another day we had a character parade and presentations on the people of Georgia. I had my students talk about the natives who lived on what is currently the Ocmulgee Indian Mounds, and make the coil pots in the same style and using the same techniques of people 10,000 years ago. For our final big hoorah, I worked with a couple of students, to create a mural of some favorite landmarks from various spots in Georgia:  Macon, Savannah, Atlanta, St. Simon's Island, and Cumberland Island. 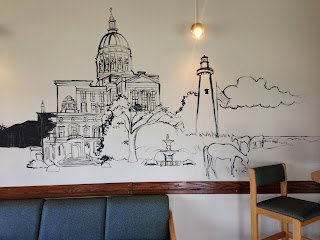 I painted the outlines of the mural in chalk and traced them in bold black so my visually impaired students could see. One had the task of painting large areas like the sky and sand, while the other did small areas of under-painting, like the Indian Mound, or a tree.

By three Friday classes, we had most of the painting finished, but I realized that some of the buildings looked a little crooked, so I came in some afternoons on my own and ended up completing the whole thing myself, although my helpers feel good about their ownership in the piece.


With every mistake, one of my students kept saying, "Oops. That's OK, you'll just paint over it."  I loved that she wasn't beating herself up, but I finally asked why she thinks that I'm supposed to step in and fix every mistake, and so she changed her mantra to: "Oops. That's OK, I'll just paint over it." And that realization, that it's just paint and any mistakes can be fixed with more paint, is exactly what is needed to have the courage to do a big project like this. The four large stage sets we did during the course of the year, was perfect preparation for me to try to make my mistakes in public (in the cafeteria lobby rather than my own classroom). Lots of people had opinions about what landmarks I should be adding, but I would tell them to feel free to use their great ideas when they do their mural.

Here are some details so you can see my how large and loose brush strokes can work from a distance. 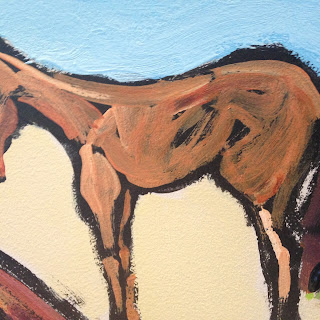 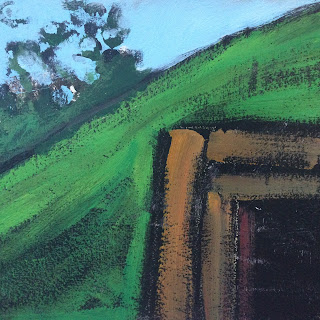 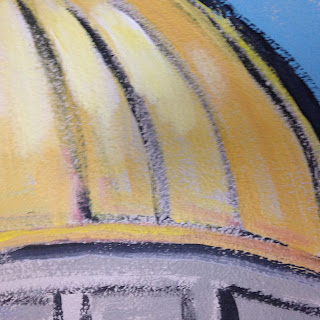 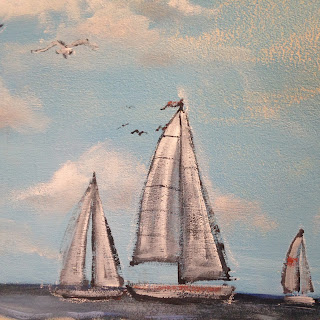 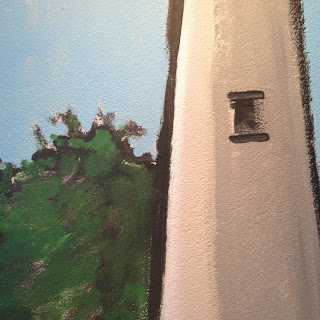 Posted by Kristen Applebee at 5:35 AM