The end of the school year brings with it a flood of activities. I was looking forward to the spring art show and concert at the end of March. The next day I was going to chaperone on the New York City trip, where we had front row tickets for a couple broadway shows, a guided tour of the MoMA. This week, I was going to take a group of students to see Hamilton in Atlanta. There was the senior trip to Tennessee, water play day for the elementary students, Special Olympics, the school talent show, awards ceremony, graduation, and of course prom, which would have been today. If you follow this blog, you know that I've been trying to get prom decorations together since January. But the school closing which was supposed to go through April 6th, was pushed back to April 13th, and now we won't be back until August. So it turns out there'll be no need for the cardboard flamingo I made from home for this year's Alice in Wonderland Prom. 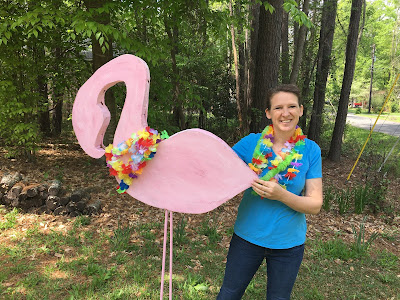 To make it, I used the front and back of a large box to cut out the flamingo shape with a box cutter. Then I used another box to cut strips (maybe 3" wide) perpendicular to the corrugations. I rolled the strips to make them flexible enough to hot glue to the edge of side. Then I glued wooden dowels to the inside, along with a cardboard strips to make a little box to contain the tops of the dowels so they wouldn't slide all over the inside. I glued the second flamingo shape on top, used masking tape to smooth out the attached corners and painted it all pink. Viola! I had planned on cementing the bottoms of the dowels into a large can and covering the outside with long strips of grass, but the dowels can also be placed in the ground to stand; add a few leis to make it a perfect backdrop for a backyard luau. I may not need this for another year, but then again, you never know if that first faculty meeting back requires everyone to bring large bird shaped decorations. It's better to be prepared. 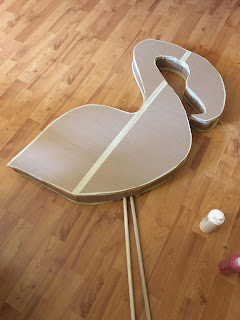 Posted by Kristen Applebee at 7:14 AM