Jim Henson is a creative genius who brought happiness to millions. His college degree was not in Art, even though he drew every day. It was not in English, even though he wrote scripts for TV and film; and it wasn't in theatre or performing arts even though he won lots of Emmy and Grammy awards.  He studied Home Economics, and he used his sewing machine the way other artists use a paint brush. I introduced my students to the world of Jim Henson (via documentaries, articles, and performances) as a spring board for students to create their own puppets.  Throughout the lesson, students also did writing assignments to learn things like character development, dialogue/monologue, and voice. 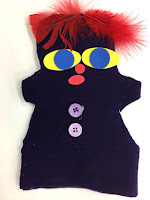 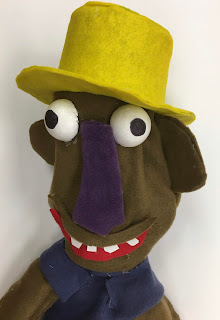 Our puppetry lesson is part of a month long unit about the tie between visual and performing arts. The costume (hat) design project  came before, and set design is is coming after.  I love it all!
Differentiation (buzz word in education) is a key to puppet making, because it lends itself to a huge range of interests as well as a huge range of ability levels. We had students who did elaborate hand puppets, complete with costume and students who made simple hand puppets from two pieces of fleece and sticky foam shapes to make a face. 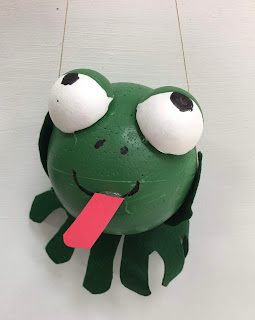 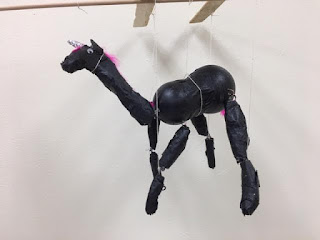 One student made a very simple marionette frog with a foam ball body attached to two strings to help it move. Other students made more complicated marionettes such as a long legged, long necked bird, or a unicorn with four moving legs.

My youngest students made felt finger puppets with characters that ranged from a pig to an alien. I have a student with an obsession with caterpillars made very simple puppets from a single piece of thick, fuzzy yarn, google eyes, foam nose, and pipe cleaner antennae. Two pieces of wire or pipe cleaner twisted around the body brought the bug to life, causing it to inch along or dance.

The two week puppet adventure included a trip to the Center for Puppetry Arts in Atlanta. It is an amazing place and I couldn't believe how accommodating they were of my students of visual impairments.  Our tour guide allowed my students to handle and try out a variety of types of puppets from around the world: Africa, China, Indonesia and the U.S. The Japanese puppet required three people to work it. The learned about stop animation and tried to assemble puppets from found objects. 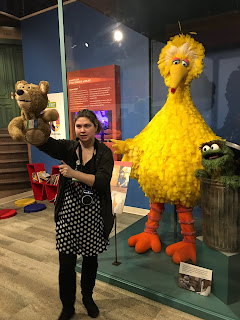 We learned even more about Jim Henson with exhibits dedicated to Sesame Street, The Muppets, Fraggle Rock, The Dark Crystal, and Labyrinth. Students played on a TV set, and handled materials in the workshop.

I have a student who wants to design puppets for a career. I promised her that if she faced her fear of flying to Kentucky last fall to attend the exhibit and awards ceremony, to which she was invited, that I would find a way to take her to the Center for Puppetry Arts. This trip was my keeping a promise, but it was also a huge gift to every student who came to experience a world class collection and learn about this art form.

The lesson included writing components as students began, even before their first sketch, developing a character with a name and attributes. They wrote questions to ask our tour guide for out tour. One student nudged me as his question was being answered before he even asked. They wrote scripts, each with a beginning, middle, and end. And they wrote about the field trip, so although students are making art, they are also learning social studies, language arts, and just adding joy to life. Watching students perform around our classroom table, with their silly voices made the lesson all worthwhile, for me.


Posted by Kristen Applebee at 5:15 AM