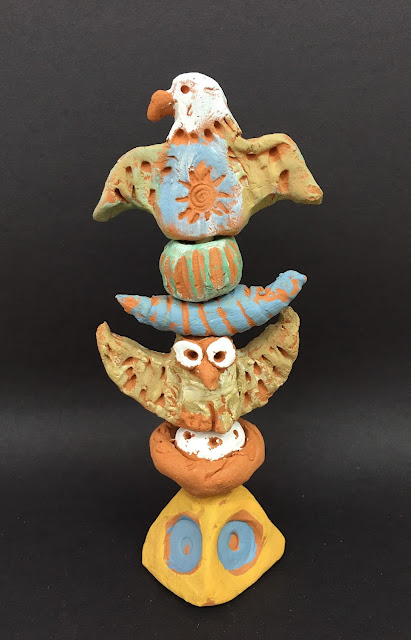 November became the month of the totem pole in my art room. Thanksgiving doesn't have much to do with the indigenous people of North-Western U.S., but it is a nice time to remember that there were people living in this country before Europeans settled here. Plus it's an important part of the 3rd grade school social studies curriculum.

We discussed the purposes and types of totem poles and the people who made/make them. Then each elementary school student made his or her own, by making small animals and shapes and poking a pencil through them.  Dick Blick has a lesson plan with air dry clay and dowels which I'm sure would have worked better, but we had a lot of regular clay and so that's what we used. The problem is to remember that clay shrinks and when the hole shrinks it will be nearly impossible to get it off your dowel or pencil before firing in the kiln. So we removed the pieces before they hardened (after having let a few dry and breaking them off), but then it was a matter of finding a small enough dowel to stack them on after the kiln firing.  It was a pain trying to get each student their own pieces (hundreds of tiny animals in the kiln), but it helped that there was a name on each one and that I took a picture of each finished pole before disassembling it for the drying and firing. Again, the air dry clay on dowels would have been much easier, but I think they still learned what I'd hoped they would learn, and the products turned out to be pretty cute. 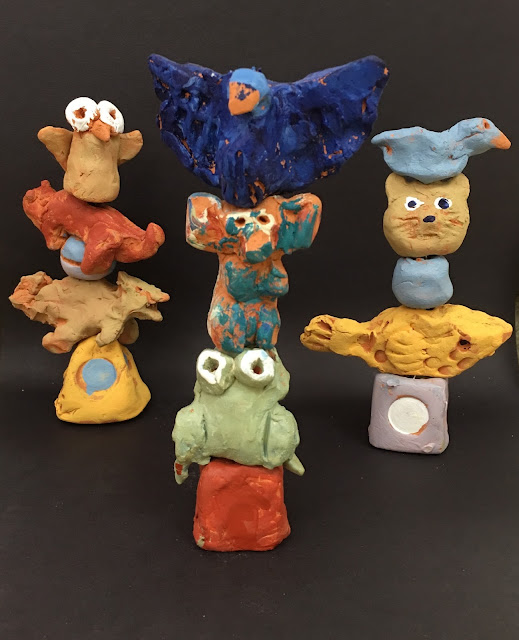 Posted by Kristen Applebee at 4:53 AM