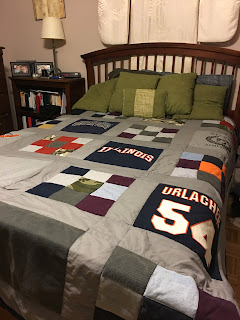 My husband's dad died last November unexpectantly. As I watched him deal with the plans for funeral and inheritance with my two sister-in-laws, I was impressed at how selfless and cooperative each of them was. There was a question of what to do with "dad's clothes" since they wouldn't fit anyone in the family. I offered to make quilts for each daughter. Little did I know what a learning curve I'd have, and how long it would take.

Justina (younger sister-in-law) sent me a text, once the shirts had been chosen, packed up and sent to Georgia. Minutes later I got a second text, frantically explaining that the cat was also accidentally packed up and shipped. I can only imagine what a cozy and welcoming place a box of shirts would be for a family pet. Luckily, UPS was able to find the cat before the box left the Chicago area, and made it home within an hour or two. 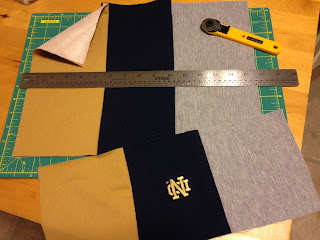 Each quilt was queen size, consisting of 20 squares (4 columns of 5). Ten squares were solid 16" X 16" which become 15"X15" after the seams were sewn. Ten squares were made of 9 smaller squares. Each of the smaller squares was 6"X6", which ended up as a 15" square. The strips of fabric on every side of the square were 6" wide, which allows a .5" seam allowance. The end quilt size was 85" X 105". That's a little big for me to maneuver and I was wishing I had a quilting machine at more than one point in the process, but a sewing machine quilting foot did help. And by using thinner batting, there's less to try to wrestle.

Since most of the shirts were knit, an iron on interfacing backed each square. This kept the fabric from stretching and becoming mis-shaped. 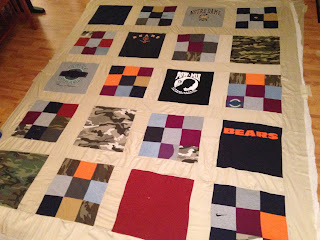 Part of the reason this project took over half a year to complete is because I wanted my 12-year old daughter to participate, not only to learn how to quilt, but to have her hands on family history, and be able to show love to her aunts. 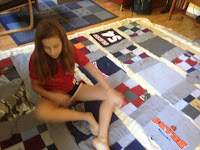 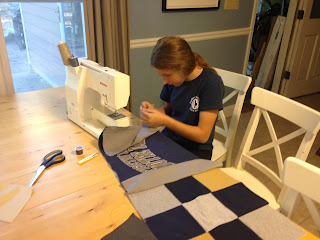 Despite our months of working together, the end results are far from perfect. Still, I hope that each time these quilts are used, two sweet daughters can feel a hug from their dad. 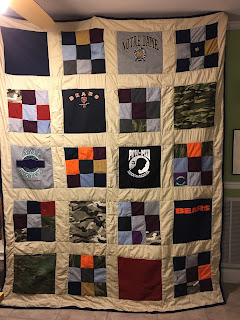 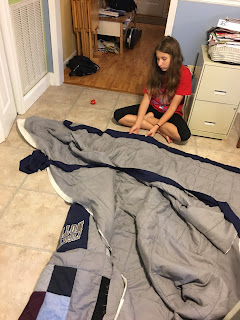 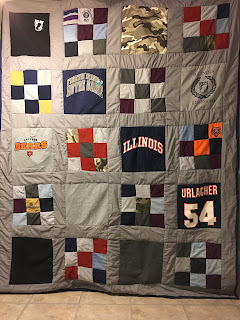 Posted by Kristen Applebee at 7:58 AM